Equipment World Staff (EQW)
Jan 22, 2015
The RTG 21 T prepares to hoist a steel sheet pile prior to pile driving. The narrow workspace was positioned between the dunes and the ocean within close proximity to multi-million-dollar beachfront homes.

The Borough of Mantoloking, New Jersey, was among the areas hardest hit by Hurricane Sandy. To mitigate the impact of such storms, this fall Springfield, New Jersey-based EIC Associates installed just over 3.5 miles of steel sheet pile wall along the beach for the New Jersey Department of Environmental Protection’s Bureau of Coastal Engineering.

The scope of this $23.5-million project—part of a much larger beachfill project by the U.S. Army Corps of Engineers—entails driving the sheet piles, and installing bent plate caps and geotextile anti-scour aprons. This wall of steel will protect the $265-million, 12.5-mile reconstruction of Route 35, a coastal emergency evacuation route.

EIC used two RTG Rammtechnik GmbH pile drivers—a RG 19 T and a RG 21—with telescopic leaders to fuel the job’s production. The biggest obstacles faced, says Serpe, were the “large interlocks of these cold rolled sheets and the brittleness of sheets.” The interlocks of cold-rolled sheets are looser than those of hot-rolled steel. EIC needed a jaw design that would match the driving rate of hot-rolled piles, while reducing strain on the RTG pile drivers. The extra play in the interlock also required close attention so the caps would fit properly.

The thickness of the interlock between the cold rolled steel beams required the fabrication of customized jaws for the RTG pile drivers. RTG fabricated and shipped six sets of jaws from Germany to keep the project on track. Downtime was unacceptable on the project, and so EIC relied on Equipment Corporation of America to maintain the rental pile drivers, an effort lead by sales engineer Chas Raysik.

“We’ve had instances where it’s the middle of the day on Saturday and something is broken,” says Derek Serpe, EIC project manager. “We called Chas and there was a mechanic out there on Sunday. By Monday at 7 a.m., we were back to work.”

The ground crew threads the chain through the sheet pile and interlocks the clevis into the rear of the hammer’s clamp housing. The RG 21 T hoists the sheet into an upright 90-degree position and swings roughly 180 degrees to meet two workers positioned near the falsework in the sand. The sheet-pile is carefully guided into place before the vibration begins.

This $23.5-million project required $17 million in steel from Middletown, NJ-based Skyline Steel, which mobilized a rotation of 15 truckloads from June 23 through Labor Day. “With this equipment,” Serpe says, “I can drive the sheets as fast as we can get them on the job.”  “It’s much better than a traditional crane with a hammer,” Serpe says.

The pile drivers feature an Automatic Self Leveling function to ensure that sheets are plumb, which is was mandatory on this project. “During the driving process, the mast is being monitored,” Himborg explains.

“When the mast goes a bit off of being plum, it automatically comes back.” A ground man with a hand level verifies plumbness as the pile vibrates into the sand.

Steel I-beams pinned in the sand serve as falsework to ensure the plumbness of incoming piles. Serpe explains that keeping the sheets straight is critical to ensuring that the bent plate cap fits on top properly. “Most people that come out here and see a cold rolled sheet installed this straight want to go and shake the foreman’s hand,” he says.

The worksite, framed by a towering dune and stockpiled steel sheets, is not much wider than a couple bowling alley lanes “In this area, you can’t get any more of an easement or you’ll be in someone’s living room,” Serpe says with a laugh. The wall was designed to follow the easement between the shoreline and the dunes, while adhering to residential property line setbacks, and tying into the future beachfill project.

Working on the beach presents unusual challenges, including wear and tear on the equipment. While gravity returns much of the fine white sand to the beach, it sticks to lubricated areas such as joints and within the tracks of the pile drivers. The resulting friction can be damaging, according to ECA’s Raysik. The salty air can also increase corrosion. Another challenge is the constant clogging of air filters by airborne sand, which reduces the performance of the equipment. EIC’s full-time maintenance crew fought this battle by blowing them out bi-weekly.

Mobility was the next challenge since wheels and tracks slide in soft sand. EIC increased traction along the work corridor with a geotextile fabric base topped off with crushed stone. “It’s an incredible amount of effort just to get the steel where you need to install it,” says Serpe of the sandy site. He attributes much of the credit to EIC’s skilled operators. The steel sheets—45-foot-long-by-4.9-foot-wide – tip the scales at 7,000 pounds. Each pile was dragged by a bulldozer from a nearby staging area to its final destination.

EIC will not only deliver protection to the barrier island of Mantoloking, but the finished project will restore the beach to its original appearance. This is the first phase of a $300-million Corps beachfill project that will build up dunes, a berm, and extend the beach by 200 feet between the Manasquan and Barnegat Inlets.

And this wall of steel soon will be a distant memory, disguised by dunes. “You’re never going to see this wall,” says Serpe “and it’s the last line of defense, if God forbid, the big storm ever comes again.” 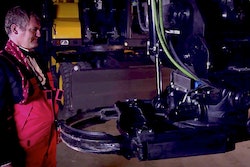 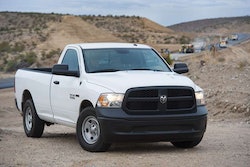 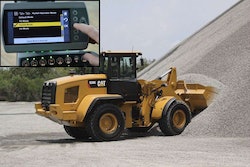 The Programmable Wheel Loader: How the Caterpillar 938K transforms from pile puncher to finesse machine with a few taps