High-definition is a term normally associated with televisions, but Caterpillar is using it to describe a new hydraulic system that plays a crucial role in the company’s next generation of mini-excavators.

One of the biggest challenges the company faced in bringing these machines to market was how to meet emissions regulations without sacrificing performance. The EPA is dictating what the engines can do, so Cat tweaked their hydraulic systems to keep from having to sacrifice performance, hence the high-definition hydraulic system.

“The primary change from our old valve to this valve is that it is a simpler architecture,” says Jennifer Hooper, marketing development engineer. “It is still a load-sensing, flow-sharing system, but it offers efficiency, controllability and precision because we removed all the complexity from the valve system.” A simpler valve architecture reduces heat, which reduces hydraulic instability, so you pack in more hydraulic power without having to increase engine size or horsepower, she says.

The 303.5E2 also employs something Caterpillar calls “smart technology.” Every manufacturer, Cat included, has dropped the horsepower of their 3.5-ton excavators below the 25 horsepower threshold where emissions regulations kick in, says Greg Worley, senior project engineer. “But we were not prepared to cut horsepower by 20 percent and say to our customers, ‘Hey that’s it, that’s what you get,’ because nobody buys a 3.5-ton machine and expects to get less performance.”

In the face of these horsepower cuts, Cat borrowed the computer-controlled pump technology from its F-series backhoe and adapted it to the 3.5-ton excavator. “The F-series pump is an electronic pump, a pump with a brain,” says Worley. “We’ve taken that same logic and put it in our 3.5 ton machine and called it smart technology.”

This pump senses and adjusts to altitude, ambient temperature, machine temperature, hydraulic load and AC load. “It takes all those parameters and maintains the machine’s torque curve–totally invisible to the operator,” Worley says. “We get the same performance with 20 percent less horsepower, According to the company, the 303.5E2 gets an 8-percent improvement in fuel economy and 7-percent greater efficiency over the previous E-series.

Hydraulics aside, the E2 series include additional improvements as well. Cat redesigned the operator station for the 3.5- to 5.5-ton models. The sliding glass door has been replaced with a pin-back style door. Flat glass panels are used in place of curved glass because flat glass is easier and less expensive to replace. When you’re jonesing for a cool breeze, the bottom window panel slides into the top window and the whole system lifts up on gas-assisted struts and stores over the operator’s head.

All the E2 models use the company’s COMPASS (complete operation, maintenance, performance and security system) digital control panel. This in-cab display monitor requires a five digit alphanumeric password to start the machine,  and offers an automatic engine idle selection and the ability to adjust the hydraulic system output as well as a variety of maintenance, work tool and regen information. 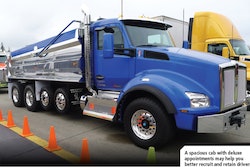 First Drive: Kenworth’s new T880 vocational truck has a luxury feel sure to please both drivers and mechanics 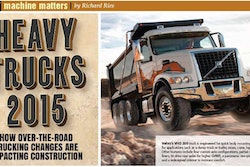 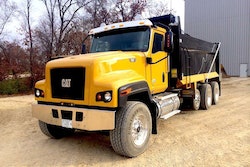