“The Big One” has once again lived up to its name for Ritchie Bros. Auctioneers.

During its huge annual auction in Orlando, Florida last week—the largest equipment auction in the world—Ritchie Bros. sold more than $166 million worth of heavy equipment. To give you an idea of how big this event is to the company, their average auction brings in $16 million.

Every item up for auction at the six-day event sold.

The company announced today the auction broke records for the number of on-site sellers as well as records for online sales, participating online buyers and online registered bidders.

One of the more interesting stories out of the auction was rental equipment. “Rental, backhoes, that stuff seems to be up because building and home building is back,” says Steve Kriebel, Orlando regional sales manager for Ritchie Bros. “Volume was down, but prices were up because they’re all in demand.”

While Kriebel says little can be gleaned from the auction in terms of forecasting construction industry trends and economic health, he says the company does believe the market price for equipment in large part is set at the Orlando auction.

“If prices are up, down or staying constant, they do look at this sale because every corner of the world is here and we believe market price is set here,” he says. “We’ve seen folks raise their prices because of what went on here. Because of the scope, they hinge their prices on what goes on here.”

RELATED: Tour the largest heavy equipment auction in the world, in this Ritchie Bros. Orlando gallery

The records the company seemed most proud of during interviews at the site last week are the online numbers. Last year, the company exceeded $1.4 billion in gross auction proceeds from equipment sold online versus $3.8 billion sold on site. Ten years ago, the online figure was only $151 million.

“When we launched it, there were estimates that online proceeds would never exceed $10 million per year,” says Karl Werner, the company’s chief auction operations officer. “That wasn’t my estimate but that’s how some people felt about it.”

At the Orlando auction last week alone, the company saw $54 million in online sales, accounting for 33 percent of total auction proceeds for the big event. More than 4,400 bidders registered online and more than 1,000 of them bought equipment.

Werner says they expect that trend to continue growing due to the fact that in 60 percent of lots, the internet participants are either the winner or the runner-up bidder.

As the regional sales manager there, Kriebel plays a big part in filling up the 200 acres of auction yard in Orlando. He calls the event a “phenomenon” and says preparations for the February auction begin in November. The yard likely won’t be clear of all the auctioned-off equipment until April, Kriebel says.

“We know people are anticipating this sale, ” he says. “It’s really nonstop for the sales end… We actually have people who bypass our October sale for this one.”

This year’s auction, though a success, was hurt by the severe winter weather that hit the northeast United States in the last month or so, Kriebel says. “We’re missing a few pieces of equipment because of that.”

“The used equipment market is down a bit,” Kriebel explains. “Manufacturers aren’t making as much equipment right now so there isn’t as much used equipment available. So we’re proud of the fact that we can gather this much, marshall it all together and sell it.”

“We also noticed a lower volume of cranes in this year’s inventory due to higher construction activity in the non-residential market,” Ritchie Bros. CEO Peter Blake notes in a prepared statement. “However, simultaneously we saw a more diverse and larger selection of equipment from the energy and transportation equipment categories than previous years.”

Kriebel says larger articulated dump trucks were down as was larger mining equipment “just like everywhere else.” Wheel loaders and dozers were the top two represented pieces of equipment at the auction with 252 and 178 available, respectively. 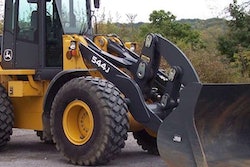 RANKED: The top-selling financed construction equipment of the past decade 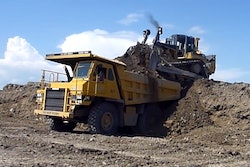 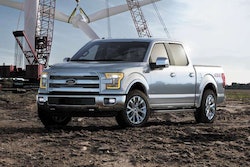 Now that Ford is on board with new F-150, pickup truck tow ratings are finally standardized