Winter Fluid Check: How to double check the health of your coolants, lube oils and DEF

The fluids essential to the operation of heavy diesel equipment are engineered to work in almost any temperature or climate on the face of the earth. But winter’s cold temperatures can turn prior neglect of these fluids into a current problem. And with short days and cold temperatures outside, drivers, mechanics and operators can be overly hasty in their maintenance routines.

So now is a good time to take an extra minute or two to go over your machines and make sure all your fluids: coolant, lube oil and diesel exhaust fluid (if you’re running a truck or machine that needs it), are in tip-top shape.

A 50/50 mixture of the appropriate coolant and water will keep your engine running in the correct temperature band and protect your radiator and cooling system from corrosion. The only exceptions being Alaska and some parts of Canada where dilutions may need to go up to 70 percent coolant/30 percent water to protect freeze point.

This is common knowledge, but after running your trucks or equipment flat out all summer with multiple drivers, operators or service techs, nobody may really know what the freeze point is.

“In summer if the coolant gets low, the driver may not care about freeze point,” says Colin Dilley, director of technology, Prestone Technology Center. “He may just throw some water in there or some concentrated coolant or the wrong type of coolant to fix the problem.”

In an emergency situation that may be the best thing to do temporarily to keep a truck or a piece of equipment moving. But that can change the freeze point percentages, and unless corrected you could have a cooling system that is radically out of balance.

Too high a concentration of coolant can lead to slushing, Dilley says. The coolant thickens – almost like a thin wallpaper paste – which leads to poor coolant performance. The water pump will have to work harder and may leak or suffer shortened life. And the corrosion inhibitors may precipitate out, leaving your system vulnerable to corrosion, he says.

Too little coolant could leave your system vulnerable to corrosion, and and the freeze point protection will not be sufficient, leading to freezing and non functioning cooling system blocked by ice. This could even crack the block or split heat exchangers due to the expansion that occurs when water freezes, Dilley says.

To check the freeze point, Dilley recommends using a refractometer as the most accurate method. Test strips also work well, but Dilley cautions that some squeeze bulb type test devices can throw off the results when contamination is present.

Cold weather can be hard on engines, especially at start up. Using the right lube oil or a premium brand and making sure it’s in good condition can go a long way towards getting the best protection and performance out of your engine.

Over the last few years improvements to the additives and increased use of synthetic and semi-synthetic oils have allowed truck and equipment owners to use lube oils with a lower range of viscosity. Instead of 15W-40, you’re increasingly seeing 5W-40 or 10W-30 oils speced.

“When it’s 30 degrees outside, a 15W30 lube oil is going to flow much slower to all the upper parts of the engine than if it was 100 degrees outside,” says Dan Arcy, OEM technical manager for Shell Lubricants. Getting the oil to all the parts of the engine as fast as possible is the key to providing the best protection to an engine and a lower viscosity oil will do this quicker, he says.

“It used to be a myth that you shouldn’t switch between synthetic and mineral-based oils,” Arcy says, “but that’s not true. You can switch back and forth without any negative consequences.” So it can be a legitimate strategy to use a lower viscosity synthetic during cold weather and switch to a higher viscosity and/or mineral-based oil when it warms up.

The other advantage to low-viscosity oils in cold temperatures is that when you use them it takes less energy to start the engine. “On extremely cold days the battery is going to have less energy to put out,” Arcy says. So using a thinner synthetic or semi-synthetic product with a lower viscosity could be a benefit when starting an engine in those temperatures.”

Arcy adds that many parts of the country now have anti-idle laws for trucks, some even for off-road equipment. Being able to reduce the battery drain caused by multiple starts in these areas can be a significant benefit.

Diesel exhaust fluid is a relatively new product used in most diesel truck engines built since 2010 and Tier 4 Final off-road engines that use selective catalytic reduction (SCR) to reduce exhaust emissions. The fluid, which costs about the same as diesel fuel, is sprayed into the exhaust stream to chemically alter NOx – a primary component of smog. You have to have DEF to run these engines. Without it SCR engines will derate or stop.

The key thing to remember about DEF is that it’s about two-thirds water.

“DEF freezes at prolonged exposure to temperatures of 12 degrees or lower,” says Jean Van Wyk, marketing specialist at Thunder Creek Equipment, which makes DEF storage, transport and handling equipment. “DEF is not harmed by this expansion. If it freezes it can thaw out and will function the same. But if it freezes and expands it could cause the container to burst if you don’t leave room for expansion.”

The second challenge with DEF in winter is that if it’s frozen, you can’t pump it into the equipment’s on-board storage systems. Most Tier 4 and new truck engines will have a heating element in the on-board DEF reservoir so that any frozen DEF will quickly thaw out and be ready for use. But you should also make sure that your DEF storage and dispensing systems have some way to thaw it out and keep it thawed out during your service visits to the machines. EW 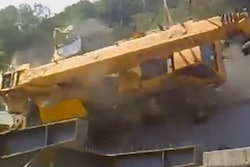 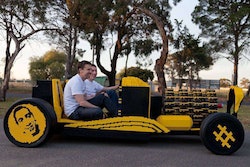 You can really drive this life-size Lego car. And it runs on air. 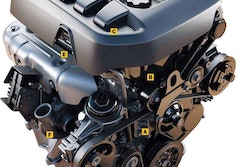