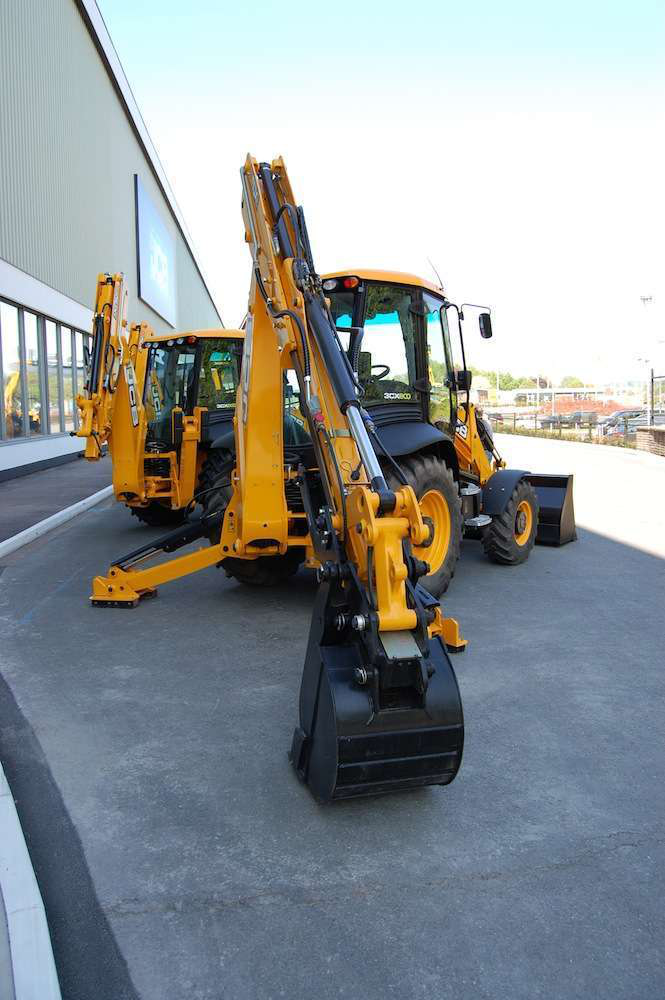 The new JCB backhoes for the American market offer a wide variety of mix and match options.

English equipment manufacturer JCB invited us over the pond earlier this month for a look at a wide range of  new and “refreshed” machines. Here’s a rundown of the models relevant to the North American market.

For the rental market or budget-conscious contractors, JCB now offers what it calls a “low-spec” 3CX backhoe with a 14-foot dig depth. This comes with a standard open cab, synchroshuttle manual transmission, manual levers and a 74 horsepower, Tier 4 Final Ecomax engine.

A triple-gear hydraulic pump allows the operator to drop the engine speed but still maintain high hydraulic flow rates for demanding applications. The cab is designed with a reinforced C-pillar, which eliminates the sightline restrictions of a A- or B-pillar while still meeting ROPS/FOPS requirements. If you like, you can spec the 3CX with a fully glazed cab option, extended dipper stick and factory installed theft protection devices.

The next two steps up bring additional horsepower and options with backhoes JCB calls “Supers.” The 3CX Super offers a 91- or a 109-horsepower Tier 4 Interim Ecomax engine, a standard powershift transmission and new 44-gallon-per-minute variable-flow hydraulic pump. The 4CX Super comes with the 109-horsepower engine and also the 44 gpm pump.  The Supers can also be spec’ed with a 14, 15 or 17 foot dig depth options.

JCB has also offered a range of options when it comes to its backhoe controls. You can spec any of the three new models with what the company calls its “classic controls” or mechanical/wobble stick style.

But the 3CX Super and 4CX Super have two additional options. With the JCB Easycontrol system, the excavator end is controlled via two seat-mounted joysticks with the same feel and functionality as the classic controls but with the benefit of being servo-activated, giving them lower lever effort and shorter throws. You can also spec the Supers with the new JCB Advanced Easycontrol, which has the same excavator end controls but also incorporates the servo-controlled loader controls into the right-hand seat arm. The full servo controls use a open-center, variable flow pump which pushes out hydraulic oil on-demand only and hence saves fuel.

The new Ecomax engines boost low-end torque and fuel efficiency over their Tier 3 predecessors. They also achieve emissions goals without the need for a diesel particulate filter—a point of pride for the company, which sees the DPF as an unnecessarily expensive operational and maintenance issue for contractors. 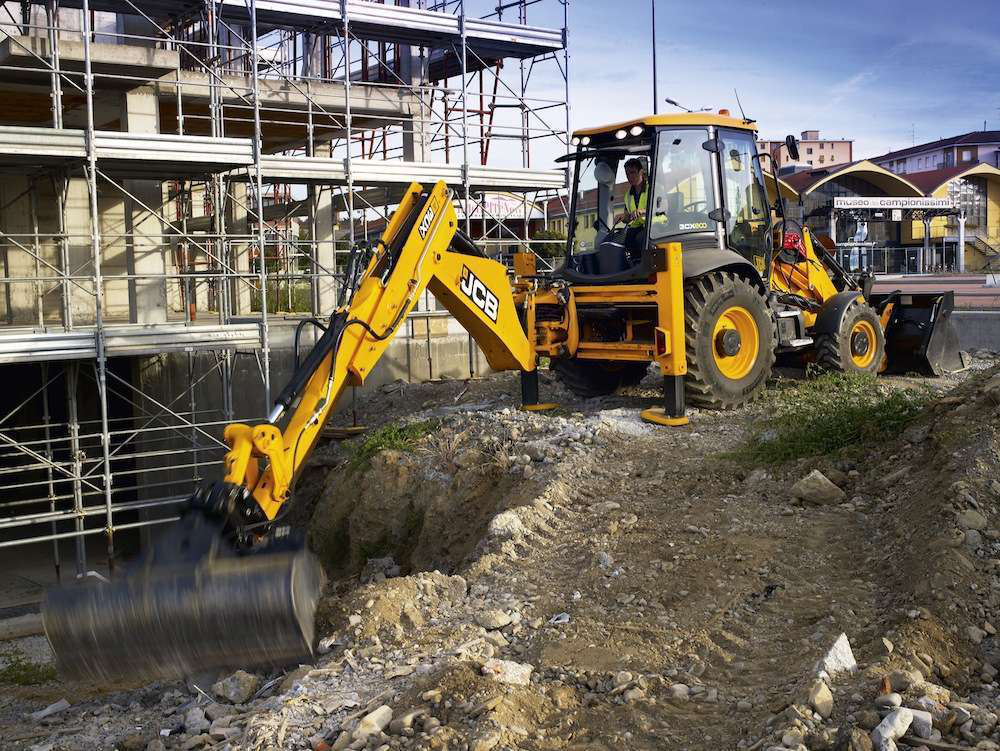 Sideshift excavator mounts are the norm for backhoes in England, but JCB says they’re becoming more popular in the U.S. too.

And just in case you’re wondering, the new backhoes are built with the center-mount excavator end for the American market, although you can order one with the sideshift excavator mount if you prefer. JCB says demand for the sideshift mount in the states is increasing, especially in the municipal market.

The company has also developed a new bucket thumb attachment for the American market. Profile jaws on the thumb aid in picking up different types of material, not just landscaping waste. And it’s fold-away design allows the excavator end to be used for digging without having to swap out the attachment.

Although it will be officially introduced in September, we got a sneak peak at the new JCB 417 wheel loader at the June press conference. It replaces the 416 model. The 417, along with the revised 411 model get a new cab with a full color LCD monitor and a single piece hood for ground level service access and improved rear visibility.

The horsepower on the 417 drops to 125, from the 131 horsepower of it’s predecessor, but a variable geometry turbocharger on the new Ecomax Tier 4 Interim engine better matches the air and fuel mixtures to a wider range of rpms resulting in more torque, especially at lower engine speeds, and nine percent better fuel efficiency. A transmission disconnect feature built into the service brake and a viscous coupled, on-demand engine cooling fan also promote fuel efficiency. The 411 comes with a 91-horsepower Ecomax engine. And again, there’s no DPF to concern yourself with on these machines.

JCB increased the size of the cab on the 417 by inserting a driveshaft between the engine and transmission. The cab is essentially the same size as the bigger 427, 437, 457 and 467 models. Better sealing of the cab and other design enhancements have dropped the sound levels to no more than 70 decibels, and climate control is offered as an option. The new joystick is servo controlled and has electro-hydraulic proportional controls, activated by a roller switch for the auxiliary circuits. The rollers tie into constant flow hydraulics which can change the speed of your attachments (i.e. a sweeper broom) on the fly. 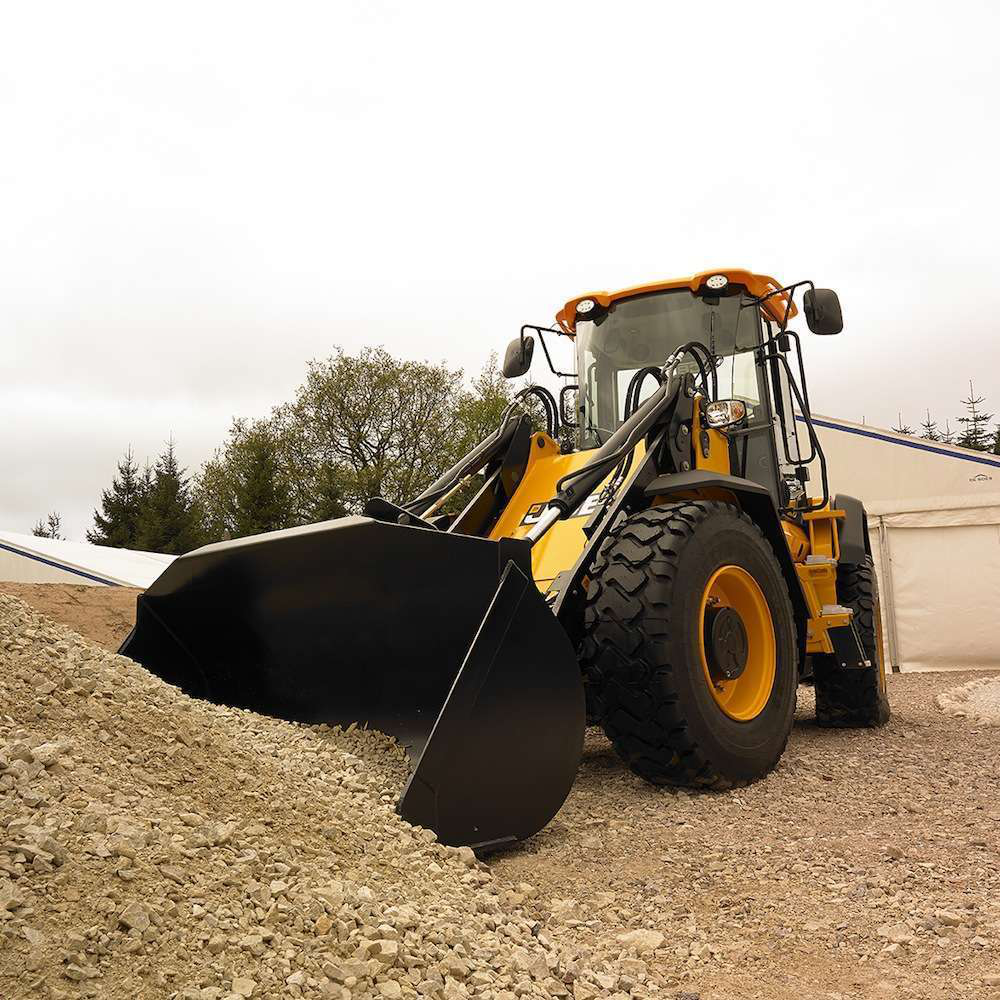 JCB’s new 417 wheel loader. Torque gets a boost in the new wheel loaders thanks to a variable geometry turbocharger.

On the business end, the HT or high torque loader arm uses parallel lift geometry giving you unobstructed visibility through the middle of the arms to the attachments and pickup points compared to a Z-bar configuration. It also gives you constant torque throughout the bucket dumping angle.

Operating weights have been increased slightly. The 417 weighs 21,100 pounds and the 411 comes in at 18,000 pounds.  The 416 came with standard and super high lift arm options. The 417 will offer a “high lift” configuration between those two, with a pin height of 12.5 feet and a dump height of 9.6 feet when equipped with a 2.1 cubic yard bucket.  The 411 is offered in the standard and super high lift configurations.

The company also showed us it’s new 467 wheel loader, which is a new size class for JCB, and more suited for aggregates and quarry applications. But it only comes at present with a Tier 3 engine, which means it can’t be sold into countries adhering to Tier 4 diesel emissions regulations. It’s a brand new, clean-sheet-of-paper design with a 7.6 ton payload and a Z-bar loader linkage. Company officials say the 467 will get a Tier 4 Interim engine next year, but couldn’t be specific on dates. 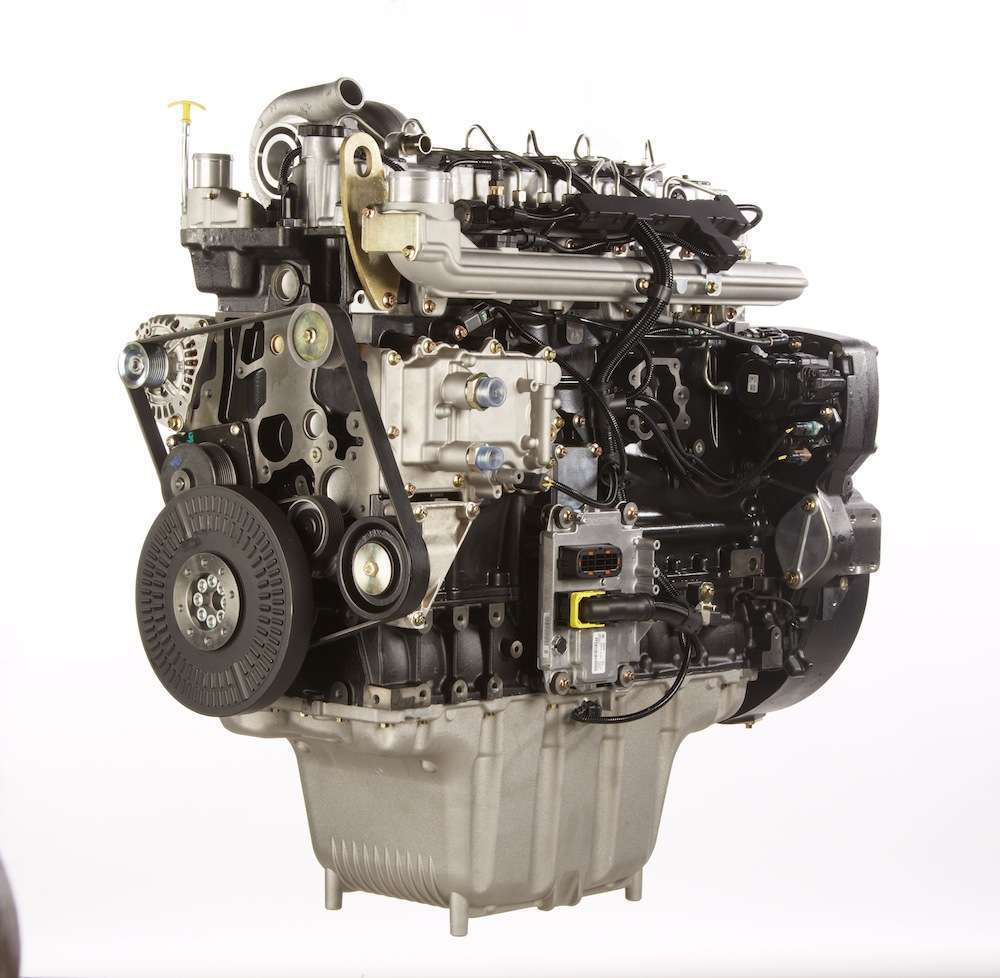 The JCB Dieselmax 672 is Tier 2 for now, but marks the company’s first entry into the six cylinder category.

JCBs big reveal for the June press conference was a brand new engine and the company’s first six cylinder engine, the Dieselmax 672. Alas, it’s only a Tier 2 model and will only be sold in to countries that share our super stringent diesel emissions regulations. This essentially means China, Russia and Africa.

The Dieselmax 672 comes with electronic control, Delphi common rail fuel injection and fixed geometry turbocharging. The 7.2 liter engine offers horsepower ratings of 188, 221, and 225 with a maximum output of 302 horsepower.  Maximum torque tops the charts at 885 foot-pounds. The engines boast a 500-hour service interval and will be built in the company’s Derbyshire, England factory.