As the equipment ages…

When reviewing the responses to our latest equipment strategies survey, I was struck on how similar the answers were to last year’s survey. It appears that equipment owners are holding steady in their equipment management and acquisition plans: buying plans were modest, with small increases reported by those who planned to buy one to two artics (up 7 percentage points), compact excavators and wheel loaders (up 4 points each).

Despite the industry’s credit woes, in both years, respondents who did finance reported little problem in getting equipment financing. Ninety percent said getting this financing was “easy” or “moderately easy” this year; 87 percent gave the same answer last year.

The one distinct change from last year’s survey is the number saying that used equipment availability is good.

And despite the general aging of equipment fleets, the vast majority of respondents in both years reported the condition of most types of equipment they own to be either “excellent” or “good.” The exception: Artics, which in both years, almost 30 percent of respondents reported as only in “fair” condition – an obvious reason behind slightly stronger buying plans for these machines.

The auction trend prices tracked by TopBid, Randall-Reilly’s auction price reporting service, shows these prices tracking upward. Going back to January 2007, the peak for this period occurred in February, 2007, when the prices for the top construction equipment models sold at auction reached almost $75,000 (not seasonally adjusted). It dipped to $40,056 in January 2010, and has been on steady, albeit muted, climb since (see chart). This June, the average price was $46,706, still more than $28,000 from the peak.

Which raises the question: if contractors even at these lower levels are already feeling a price pinch in used equipment prices and availability, how much higher do used prices have to go before the scales tip, converting what might have been a used equipment buy into a new machine sale? 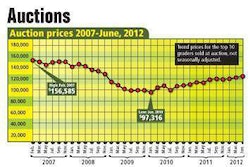 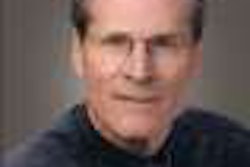 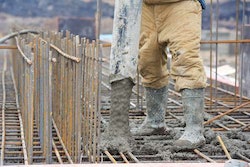