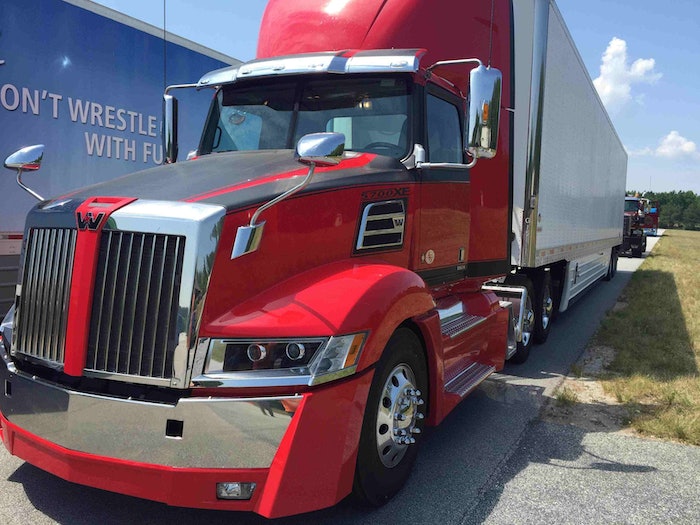 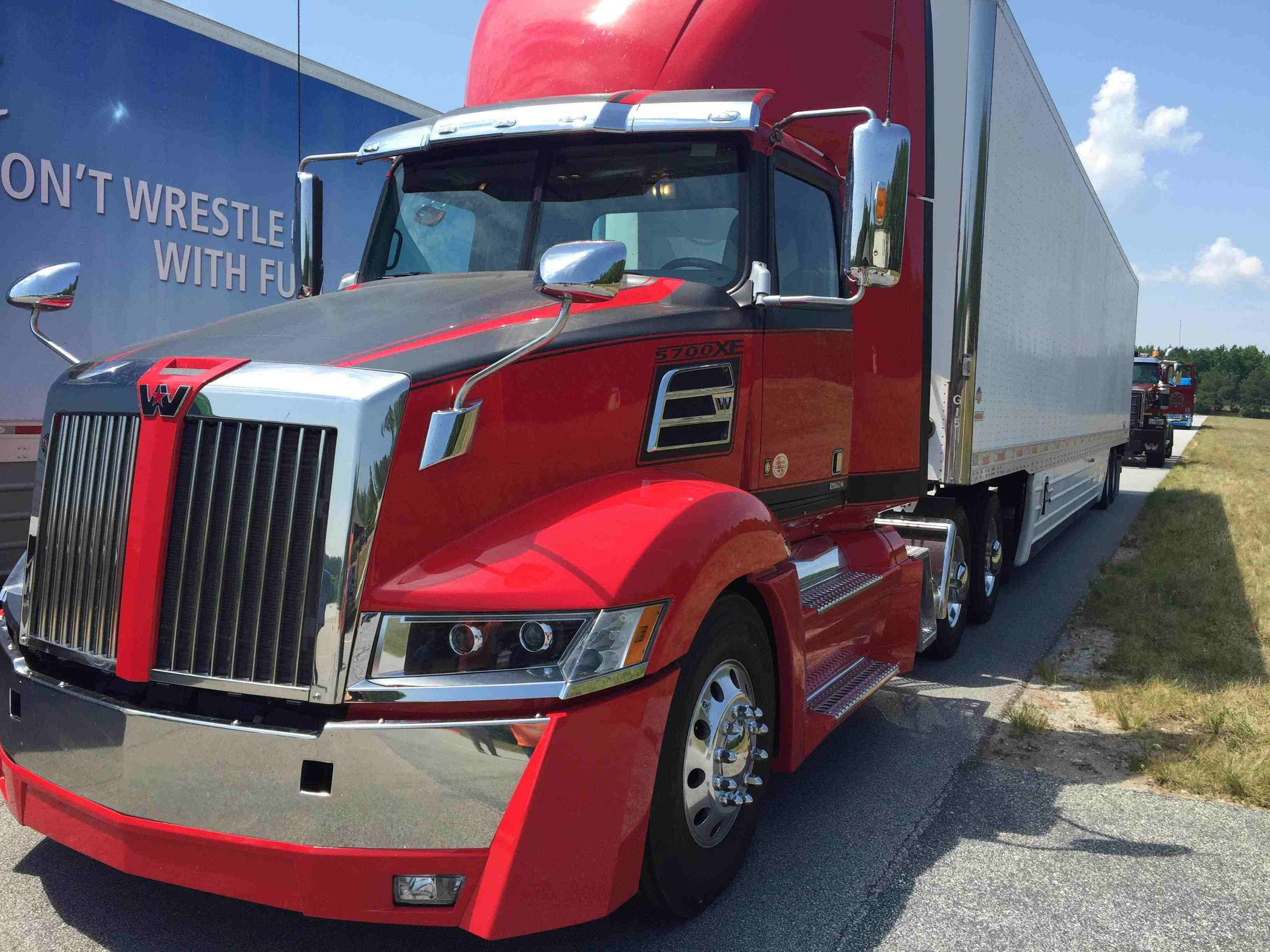 It’s not impractical to assume that when aero engineers get an eyeful of Western Star’s 5700XE, they flinch. It’s not exactly your cookie cutter aerodynamic truck, but that’s exactly what makes this truck ooze Western Star – defying convention and doing things its own way.

With efficiency and aerodynamics industry buzzwords – XE stands for extreme efficiency, after all – Western Star needed a seat at the aero table, but was unwilling to sacrifice its unique styling cues to get there.

In fact, as much work went into making sure the truck look like a Western Star as went into getting the wind to whip around it.

Boosting powertrain efficiencies, coupled with exterior aerodynamics improvement, has made the 5700XE the second most efficient truck on the road behind only Freightliner’s Cascadia.

And with the Phantom Package, a hot rod-inspired throwback decal kit available as an option, drivers can push 8MPG and look cool in the process. Kelley Platt, Western Star’s president, calls the truck “badass.” She winces as the words come out of her mouth but she’s right. Everything about this truck is uniquely Western Star and, yes, badass.

Take, for example, the distinct visor. Rather than tossing the classic accent piece into the trash, Guarino says it was specifically re-engineered to work with the slope in the hood’s rear air ramp to direct airflow over the cab.

Roof and cab fairings sweep back to tighten the trailer gap and direct air flow over and around the trailer. The Western Star Twin Force dual air intake feeds a large centrally mounted air filter to further improve efficiency, along with a new sweptback four-piece bumper with an under-bumper valance.

Recently, I was able to drive three models of the 57ooXE around Michelin’s Laurens, S.C. proving grounds – a day cab, a 68-inch high-roof and an 82 inch sleeper.

The DD15 engine (14.8 liters, 505 hp) powering the two larger units provided ample power for the two maxed out trailers, and the DT12 automated manual transmission (AMT) was more than responsive. 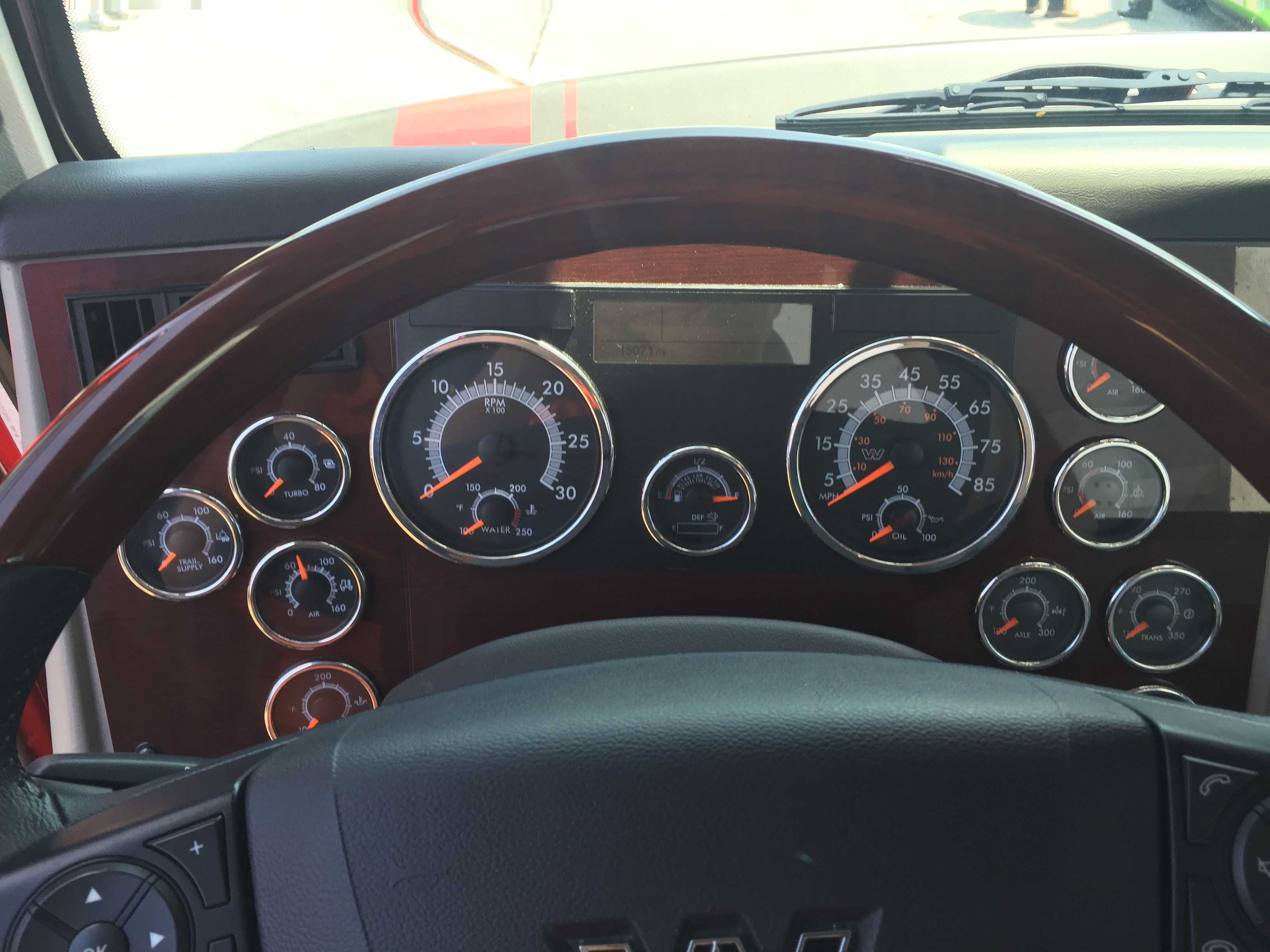 Barely a quarter-mile into the drive and it’s easy to see why many fleets have gravitated to the 5700XE as reward for top drivers. It’s comfortable and not physically taxing to drive. And, of course, it’s badass.

Cabin noise is shockingly low, even with the three-stage engine brake on the DD15 helping aggressively slow the truck ahead of a turn.

Western Star is going all-in with its aero-model truck, hitching its marketshare growth to the fifth wheel of the 5700XE. Dealers have 100 5700XE demo units in the field and fuel economy numbers have landed well into the 7 MPG range on many trucks. One of the company’s largest fleet customers recently reported a 7.86 MPG average on their own independent fuel economy test.

Nearly 1,400 XE units were ordered in 2015 and through mid-March, more than 750 units have been delivered to 331 different customers.

With positive customer testimonies pouring in almost daily, and dealers pushing one of the most efficient and comfortable trucks on the market, I think there are a lot of good things in store for Western Star and its badass 5700XE.