GPS* machine control started out as a tangle of aftermarket products all bolted on and wired up as retrofits to existing dozers. These systems revolutionized the operation of dozers, but there were a lot of parts to track and maintain.

In the past 18 months, however, several major manufacturers have begun integrating these systems into the physical structure of their machines, creating integrated systems that not only improve the grade control performance, but make the process less cumbersome from a hardware perspective.

On previous generations of systems, one or two GPS receivers were bolted somewhat awkwardly on long mast poles attached to the blade. Long cables – draped from the receivers to the body of the dozer – carried blade positioning information to the controllers in the cab.

The new “mast-less” systems use low profile receivers on the top of the cab and various combinations of sensors and inertial measurement units (IMUs) to orient the X-Y-Z position of the blade in space. The IMUs are basically gyroscopes mated to a controller or mini-computer.

One immediate benefit all these systems offer is that you no longer must attach to and remove the receivers or masts every day. The cost of these receivers made them attractive to thieves. Climbing up on the blade to remove the masts is also a safety concern. Not to mention they were somewhat precarious, since the masts were at risk of snapping off if the dozer was jolted hard enough. Finally, there was the possibility of the cables fraying or getting snagged in trees or other jobsite protrusions. All those concerns vanished with the new mast-free systems.

Aside from the physical advantages of the new systems, the mast-less systems dial into sophisticated software in the controllers that help you optimize the cut on each pass. You save fuel, track wear and engine and lube oil life by not overloading the machine to get to grade.

Each of these systems (Caterpillar, Deere, Komatsu and Topcon) have different component architecture and functionality. But what they all have in common is the ability to do GPS dozer operators faster and more efficiently. So, we thought it would be useful to compare them, side by side. Here’s how they work:

The Cat Grade with 3D system takes you from first pass to final grade, says Hagemann, and is designed to move the most material the machine can move efficiently. The operator starts moving material by lowering the blade. With Auto Carry turned on, as the blade load increases and the tracks start to slip, the blade will automatically rise to reduce the track slip and continue moving full blade loads. As the operator comes closer to grade, the system will lock on the design and drive the blade up and down automatically to stay on grade.

The system needs to only be calibrated once at install. Along with the 3D system, Caterpillar includes the AccuGrade Ready Option and the wiring and brackets to add other technologies if your application or jobsite calls for them. The design can be transferred to the display by either a thumb drive, or wirelessly over cellular or Wi-Fi signals.

Cat uses Trimble Business Center – HCE office software to prepare 3D designs/models to be loaded into their systems, Hagemann says. Trimble’s software can also accept files created in several other civil engineering software systems such as Bentley and AutoCAD.  It can also import LandXML (.xml) files, which is an international standard file format that most common engineering software companies use for transferability between office software systems. Typically the machines use .svd and .svl file formats, although they can use a generic .dxf and a .ttm file as well.

The Cat Grade with 3D system is factory installed only and is available on models D3K2-D6K2, D6N, D6T, D8T and D9T.

The SmartGrade dozers take data from two IMUs, one on the body, one on the blade, rather than in-cylinder sensors such is on the Cat system. The IMUs are housed inside small, sealed, low-profile boxes to protect them from damage and dirt. If they should fail or get damaged, replacement is as simple as unbolting the box and bolting on a new one, Wagner says.

The controllers are connected to a Deere-branded monitor in the cab and integrated with GPS antennae on the cab roof. The final component is a radio antenna to which RTK correction signals are transmitted from a base station on the jobsite.

By meshing positioning information and machine performance, the Smart Grade system determines if the machine is operating in the optimum productivity band or if some of the parameters related to the blade controls should be adjusted, says Wagner. For example, if the grade to be cut is too deep, as evidenced by track slippage or high torque, the Smart Grade controller will automatically raise the blade above the design grade, take a manageable cut and allow you to return for a second or third pass, until you reach the design grade. By not overloading the blade, you improve track life and fuel efficiency.

Deere SmartGrade customers typically load the 3D design files into the monitor using a thumb drive, but a telematics option is available, Wagner says. Because of the alliance Deere has with Topcon, the preferred software plan is the Topcon file format. Deere also has a strategic alliance with AGTEK, whose software allows you to transfer file formats back and forth between different providers.

Currently, the Smart Grade system is available on the Deere 700, 750 and 850 dozers, and more models are in the works, says Jena Holtberg-Benge, director, John Deere WorkSight. The system can also be retrofitted with a field kit to those same models of non-GPS equipped Deere dozers built since the Spring of 2016, she says.

The automatic machine control system can be used for finish grading, but also for heavy (rough) dozing as well, Witkowski says. Loading of the blade at the start of the cut is controlled by operator-selectable parameters. During the pass, if the blade load increases, the blade is automatically raised to control the load and minimize shoe slip to ensure efficient dozing. When the blade approaches the target design surface, the blade will follow it for accurate finish grade.

Design data can be transferred to the machine via USB drive, or remote file transfer, which allows data to be sent directly to the machine from a web-enabled computer. Komatsu Intelligent Machine Control dozers make use of Topcon file format (.tp3). Most standardized formats can easily be converted to this format.

Komatsu Intelligent Machine Control dozers are not designed to be retrofitted but factory installed and integrated, Witkowski adds.

While Topcon does not make dozers, they have formed partnerships to provide mast-less components for different OEM systems. The OEMs use Topcon components with their own proprietary systems to create different systems for achieving the same goals. And Topcon has its own system, described below, which is either included on, can be retrofitted to a variety of machines.

The complete Topcon 3D MC Max system uses dual IMU sensors – one on the body and another on the blade to increase on-grade performance and maximize speed and blade response, says Kris Maas, director of product management for machine control. Components are integrated into the dozer so it is ready to work without any setup. The components include: MC squared + IMU sensors, the GX-55 control box (in cab), the MC-R3 GNSS receiver (in cab) and the MC-G3 GNSS antennas (on roof).

GNSS positioning information along with the data from the IMU sensors are processed by the receiver housed inside the cab of the dozer. The receiver sends that information to the control box where the operator can instantly view the machine’s exact position on the jobsite while the hydraulics automatically control the elevation and slope of the blade.

3D-MC Max is the first integrated aftermarket system for mast-less dozing, according to Topcon. The IMU sensors process blade movement information in every axis 100 times per second – up to 10 times faster than traditional GNSS control, Maas says. The system also allows operators to work confidently in rough or fine grade applications, slope conditions, and in restricted sight environments without the visual obstruction of masts or risks to hanging cables.

There are a variety of ways to plug the 3D site plans into the system, including thumb drives and telematics. Topcon Sitelink3D telematics technology allows site plans to be sent directly from the office to the operator’s control box in the cab. Rather than wait for the latest jobsite plans, operators can simply start up their GX-55 control box and then automatically load the latest jobsite designs.

For software formats, Topcon supports most site plan and topo formats with 100 percent backwards compatibility. And most job site plans can be converted to a Topcon TP3 file format for use on any machine in the contractor’s fleet.

3D-MC Max can be factory installed or retrofitted to most modern dozers and is available for the following dozers:

OEMs say the reaction from customers to mast-less GPS dozing has been good. “From an adoption perspective, we have been pleasantly surprised, and we are excited about the traction it has with our customers,” Deere’s Holtberg-Benge says.

“The lack of a mast and cables, and the elimination of the potential for theft or wear is a big deal,” she adds. “And they do need more automation because of a lack of skilled operators. So, I see integration as becoming more important for customers.” 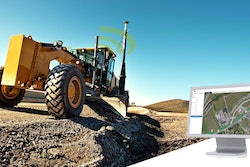 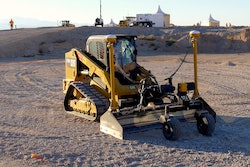 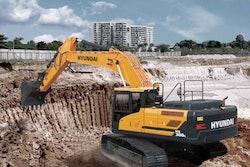