Todd Bennick spent much of his teenage years traveling around the country racing motorcycles.

“I didn't know anything about it,” says Bennick. “I didn't even know how to run one.”

But he thought maybe it could be the start of a business.

Twenty-four years later, Bennick Grading & Excavation in Nebo, North Carolina, has grown to 35 employees and $5 million in annual revenue. It was named one of Equipment World’s 12 finalists for the 2022 Contractor of the Year Award.

“I brought it home and started playing with it,” Bennick recalls of the small dozer he bought. “And then I thought, ‘Man, if I could do a job or two, somebody else could pay for my toy.’”

His first job was scraping a driveway. He moved on to cleanup work and some land clearing. He added an excavator and a dump truck.

Bank erosion at nearby Lake James led to other job offers to restore property owners’ shorelines. It involved operating heavy equipment on steep inclines and hauling in rocks and hauling out debris. “Nobody else would do it,” he says.

Over time he added employees. The company progressed to clearing mobile home lots, septic tank installation and then site work and grading.

A big break came in 2004 when Crescent Resources began developing along Lake James. A trusted friend told him that it would be a great idea to be the first contractor with a barge on the lake.

So he took a big gamble and borrowed the money to buy a barge.

“Just like going to Vegas and throwing the dice and betting it all on black,” he says of his decision.

The barge was shipped down the Ohio River in pieces and delivered to Bennick. “We had to figure out how to get it in the water … how to put it together. There wasn’t a manual.”

He also needed to rent an excavator to put on the barge, which would allow him to perform shoreline restoration work from the water rather than on land.

It was a good idea, but at first it didn’t seem that way. Soon after he got the barge ready, the lake flooded. He couldn’t do shoreline work, and he couldn’t make his payments.

It taught him an important lesson.

“I learned real quick in business that I wanted to be diversified.”

He had been building relationships with homebuilders along the lake and moved up from site work for mobile homes to large, high-dollar custom-built homes.

He made some other decisions about his business. “I just realized real quick I wanted to work for smart people that had money, and I wanted to be the best guy at what I did,” he says. “I wanted to be the guy that they came to and said, ‘Hey, this guy can do it. He's not the cheapest, but he's the best.’”

After Bennick eventually got the barge division up and running when the flooding receded, he was soon blowing away the competition, which was still working from land on shoreline restoration.

“I realized I could still do the work for the same price as I was charging on land, but I could do it cheaper. I wasn’t coming through the yard. I wasn’t tearing up all the trees. I wasn't having to fix all that back that was an expense.”

Today, he has two barges on two separate lakes in the area. He also branched out into commercial site development, performing projects for such companies as Taco Bell and Cracker Barrel.

He also won lucrative jobs to clear lots for multimillion custom homes along the lake. Bennick specializes in grading on the area’s steep terrain.

“They are a fantastic grading contractor and a great trade partner and teammate,” says Jacob Benson, vice president of Brantley Construction Company. “I can’t brag enough regarding their efforts and quality of work.”

Another opportunity came to Bennick while working on shoreline restoration. On those projects, he was required to place mulch on any land above the 2 feet of rock placed to stabilize the bank.

“So we were hauling brush off, and we're having to buy mulch to put on the bank,” he recalls. “I was having to deal with how to figure out how to get rid of these piles of brush, and we were lighting them on fire.”

Thinking there had to be a better way, he decided to buy a grinder to make his own mulch.

“Now, all of our wood debris coming off sites we recycle it,” he says. “We charge to haul it off. … And then we sell back the product we make.”

It has also proven a successful venture, and the company now makes colored mulch and is considering setting up a retail mulch operation.

Another gamble that has paid off for Bennick is GPS machine control, of which he was early adopter. At first, his crews weren’t excited about it. Some of them had decades of experience as operators and considered the high-cost technology a waste of money.

But after using it on commercial projects and seeing the increased efficiency, they lost their opposition.

“Now they love it, and they couldn’t live without it,” Bennick says.

Along with diversifying and taking risks, Bennick also learned some other lessons over the years, especially during the Great Recession of 2008-2009.

“The best thing about the recession,” he says, “I learned how wasteful I was and how I could be more efficient.

“Tough times make strong people. Easy times make lazy people, so when the money's flowing, you let your guard down.”

He also changed his view about the company’s growth. When he was starting out in his 20s, he wanted to build a large firm with 250 or so employees.

Over time, though, his outlook changed.

“I woke up one morning and go, ‘You know what, I don't want to be the biggest.

The Contractor of the Year program recognizes contractors who display the highest standards of business acumen, equipment management expertise, attention to safety and community involvement. Each year, 12 finalists receive an expense-paid trip to Las Vegas to participate in roundtable discussions and an awards ceremony. 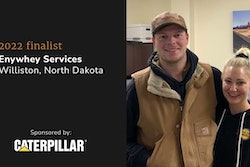 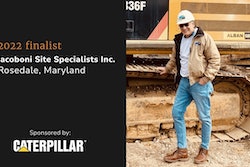 Video: Maryland Contractor Looks Back on 45 Years in Construction