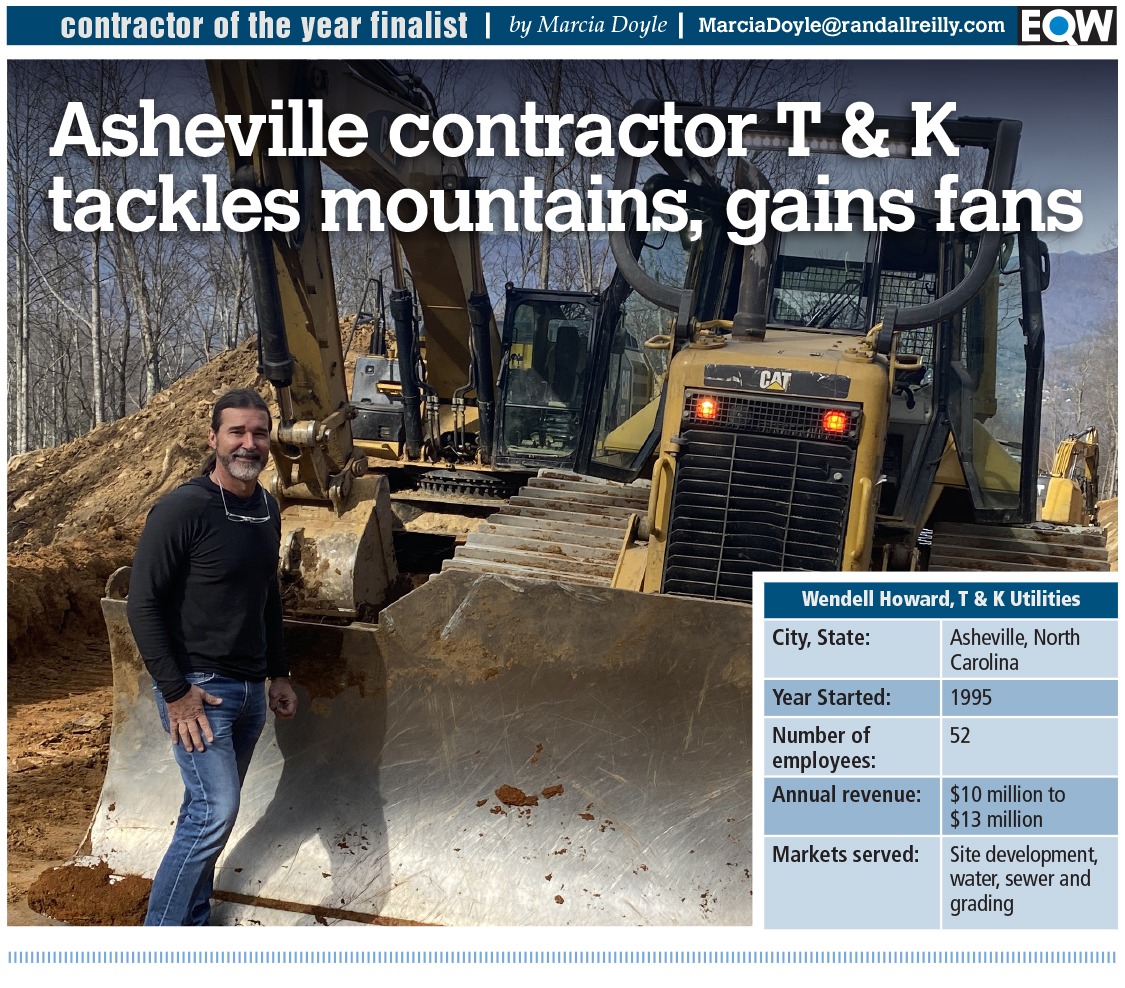 “I took off my coat and tie and went into the ditch,” is how Wendell Howard describes his introduction to construction after majoring in accounting and business in college and working at a bank.

For the next nine years he gained experience working under mentors such as Clarence Little and Garland Terry, who provided guidance he values today. “I soon learned around them that I didn’t want to be the guy who didn’t know what he was talking about,” Howard says with a laugh. “And they showed how to treat people well.”

Howard went out on his own in 1995 and formed T & K Utilities, named after his children Taylor and Keri. He lined up some sewer service work, did an RPO on a backhoe and a Cat 120 excavator and dipped into the equity of his home. He was up and running.

His company now has revenues of $10 million to $13 million doing site development, water, sewer and grading projects throughout greater Asheville. The mountainous area presents plenty of challenges as the company builds roads and installs utilities in high-end housing developments.

For example, when one developer needed a road paved late in the season, Wendell went to his asphalt supplier and convinced them to supply mix for the road. “That saved me a lot of money through the winter,” says client Andy Baker with TFM Carolina.

“I wouldn’t trust anyone else with the projects I put out for bid,” Baker continues. “Wendell checks all the boxes.” 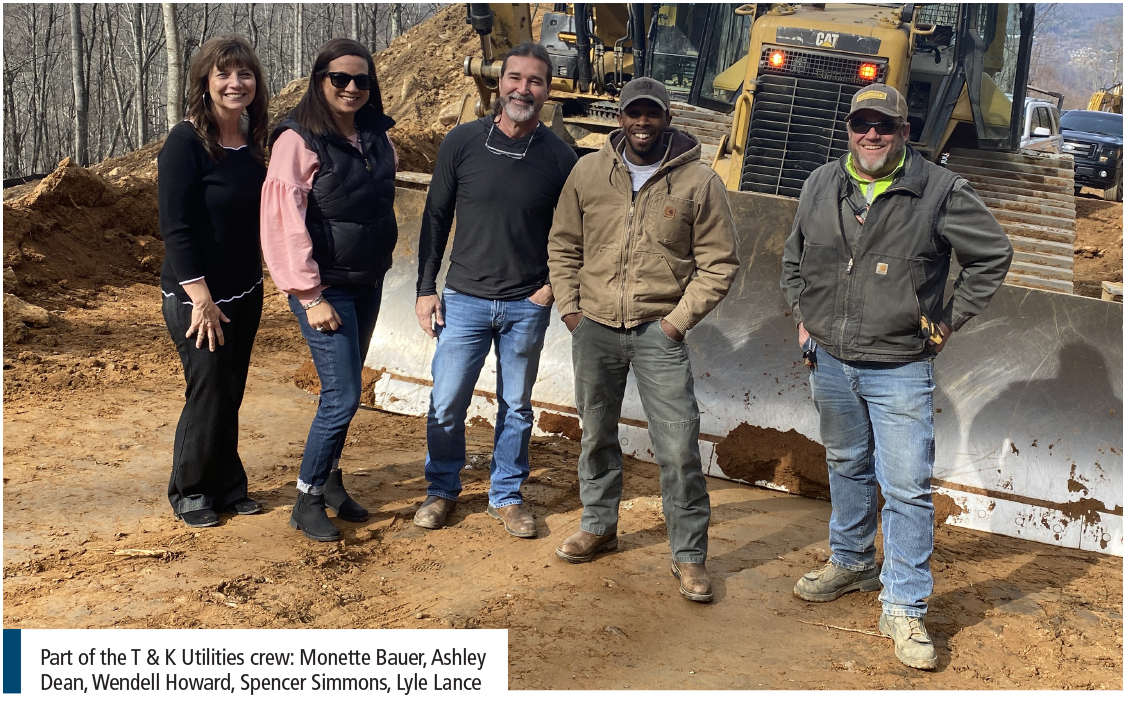 Howard’s son Taylor joined the firm 10 years ago and heads up equipment maintenance, safety and other business operations. He’s learning from Howard what it takes to handle the reins of the company, including the networking skills that have been finely honed by his father. (The two are also partners in an interesting side gig,

The company’s current mix is 70 percent private/30 percent public. “You’ve got to work with what you know,” Howard says. “We work hard at getting it right the first time.”

“Your people are what makes your business,” Howard says. “I don’t have a lot of turnover on my key people. If I make money, I share it.”

His philosophy extends beyond money. “I don’t ask them to do something in a ditch or on a job that I wouldn’t do,” he says. “Truth is, sometimes I’d rather be in a ditch than in an office.”

The day’s work can start at a gas station located a short distance from the T & K office. Some mornings the location serves as the backdrop for coffee and planning before crews separate out on jobs. “They kind of let us use it as our office since our shop is located about five miles down the road,” Howard says.

After that, Howard is usually on site at one of several jobs around town, something you sense is the best part of his day. And all along, he’s making notes on the pad that’s always within reach. “I’ll be making notes when I’m at a stop light, going over what we need, what materials are ordered,” Howard says. “Time is where you make or lose money on a job.”

This appreciation for “time is money” gets noticed by clients and extends even to project disputes. You get the feeling that Howard doesn’t want to spend a lot of time dickering. Baker calls him “incredibly fair. In fact,” he adds, “we find ourselves negotiating against ourselves, with me trying to pay him more and him trying to charge me less.”

And Mark Letterman with the City of Asheville remembers a pump station project where T & K went to an alternative supplier to get the job done per specs and on time. “They ate the difference in cost to finish the job on time,” he says.

When the Great Recession hit, T & K was building golf courses. Howard realized adjustments had to be made, and he started bidding public work. “But then there were 15 bidders on every job,” he says.

“We were just trying to break even and just turn it around,” he comments. But all in all, the downturn didn’t have a huge impact on company fortunes. “We cut back to 40 hours for maybe three weeks and then we started to have the workload and we still had the people and were still able to do work,” he relates. “When there was a job, they wanted us back.”

It also helped that Howard wasn’t carrying much debt. “We had some money laid back and I tried to be conservative about it,” he says.

“And we’ve been blessed to be able continue working during this pandemic,” Howard adds.

Asheville’s scenic terrain presents challenges, especially as T & K creates roads and places utilities in high-end housing developments. “He does significant mass grading for us, and he always has the right equipment for the job,” says client Baker. “He’s always conscious of what a road system will take, and if he has to, he will go about getting the equipment on site a different way.”

It took some time for Howard to get to that point, however. “One of the first machines I had was a Cat 120, and I asked my salesman Doug Lassiter for a month’s demo,” Howard recalls. “I also asked to pay my rent in arrears. I told him, ‘If I make it, I’ll stay with you,’ and that’s what happened.”

This relationship with Carolina Cat is now part of the way T & K does business. “Our dealer will listen when we have an issue on a machine,” Howard says. “They’ll take it seriously. They know our business and they help us find equipment.”

“We have a strong service relationship,” agrees Steve Norton with Carolina Cat. “And Wendell will do anything to help anyone and will go past any expectation to get the work done. His attitude is extremely contagious.”

Today T & K has a variety of earthmoving equipment, including excavators, wheel loaders, dozers, compact excavators and skid steers. “On a typical utility job, we’ll have one excavator digging, another excavator with a roller bucket for compaction, and a wheel loader to handle stone and sometimes a dozer to clean up after everything,” Howard says.

The company also recently bought an Asphalt Zipper milling attachment, which it uses instead of saw-cutting a road. “We work on a lot of downtown streets, and we’re able to just quickly mill it up using that attachment,” he says.

Rentals are usually restricted to smaller machines, although Howard sometimes rents an artic or a sheepsfoot roller. “I almost would rather have a payment on a newer machine instead of a rental,” he says. “I haven’t done an RPO in a long time, because I’m either going to keep it or not.”

Howard believes in maintenance agreements, particularly when buying new equipment. “I don’t like being down because my equipment is down,” he says.

Client Preston Kendall with Ingles Markets likes to use T & K’s name when he’s getting city approval of new construction. “If the meeting’s not going well,” he relates, “I’ll say that I’m asking T & K to do the job, and then it usually gets approved. They have that kind of reputation for doing quality work.”

Continues Kendall: “He shows up and gets the job done when he says he will. He could teach others craftmanship, caring for the job and how to treat the people you are around.”

“They are a contractor you can trust and count on,” adds Letterman with the City of Asheville. “We can always count on them to meet a deadline even if things are working against them.”