How long will it take for construction to recover from the coronavirus? 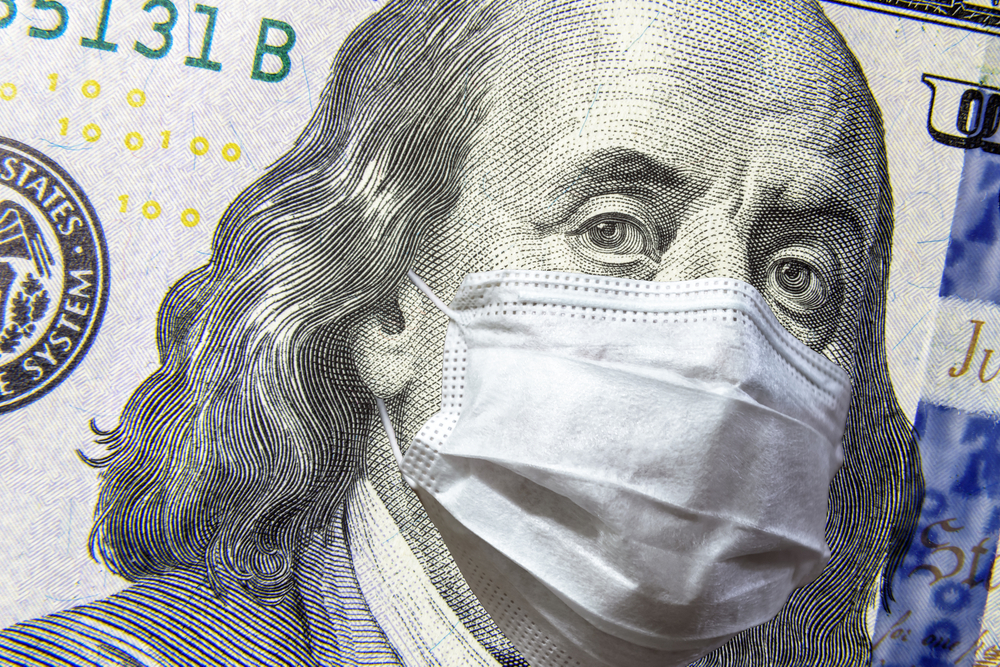 It may take at least 18 months for contractors to see a complete reconstruction of what was to be in 2020, before the outbreak of the coronavirus pandemic. But there is some good news, says Anirban Basu, chief economist, Associated Builders and Contractors.

“It will be the shortest recession in history,” he declares.

“By the third and fourth quarters there will be quite an impressive bounce-back in economic activity, although complete recovery will elude us for years,” Basu continues.

This, of course, is based on the virus not reappearing in the fall and the development of effective therapies.

In the meantime, it’s tempting for contractors to think this is familiar territory. But there are many nuances to grapple with before the industry finds a way out of the rubble.

These jitters are pushing pause on projects that would have been in full construction this spring. “We are seeing an increasing percentage of projects being canceled that haven’t even started,” says Ken Simonson, Associated General Contractors of America chief economist.

It didn’t help when the Architecture Billings Index experienced the largest drop in its 25-year history in March, falling by 20.1 points to a score of 33.3.  This American Institute of Architects number charts shifts in billing from architectural firms and is used as a nine- to 12-month leading indicator for building construction.

“All of these are pretty negative signals for what’s coming down the pike for contractors,” Simonson says. “If it isn’t being designed, if owners aren’t paying for architects to be on the job, they’re not going to soon hire contractors.”

“The bottom has fallen out on design proposals with the exception of three specific markets: health care, transportation and water/wastewater,” says Frank Stasiowski, founder and CEO of consulting firm PSMJ Resources, which surveys architectural and engineering leaders on upcoming design proposals.

Since 2003, PSMJ Resources has asked leaders of architectural, engineering and construction firms to assess the strength of their markets, which is converted into a Net Plus/Net Minus Index (NPMI ). The NPMI value is calculated by subtracting the number of respondents who responded negatively (e.g. proposal activity is decreasing) from the number who responded positively (e.g. proposal activity is increasing). If the same number responded positively and negatively, the NPMI value would be 0. April’s index number was -41 percent.

“Right now, we’re eating up backlog,” Stasiowski says. “A lot of projects just went into the ground and they need to be built and the funding is approved. I don’t see lending institutions pulling funding.” This will lead to a busy summer, he says, but that backlog will not be replaced later in the year or going into 2021. 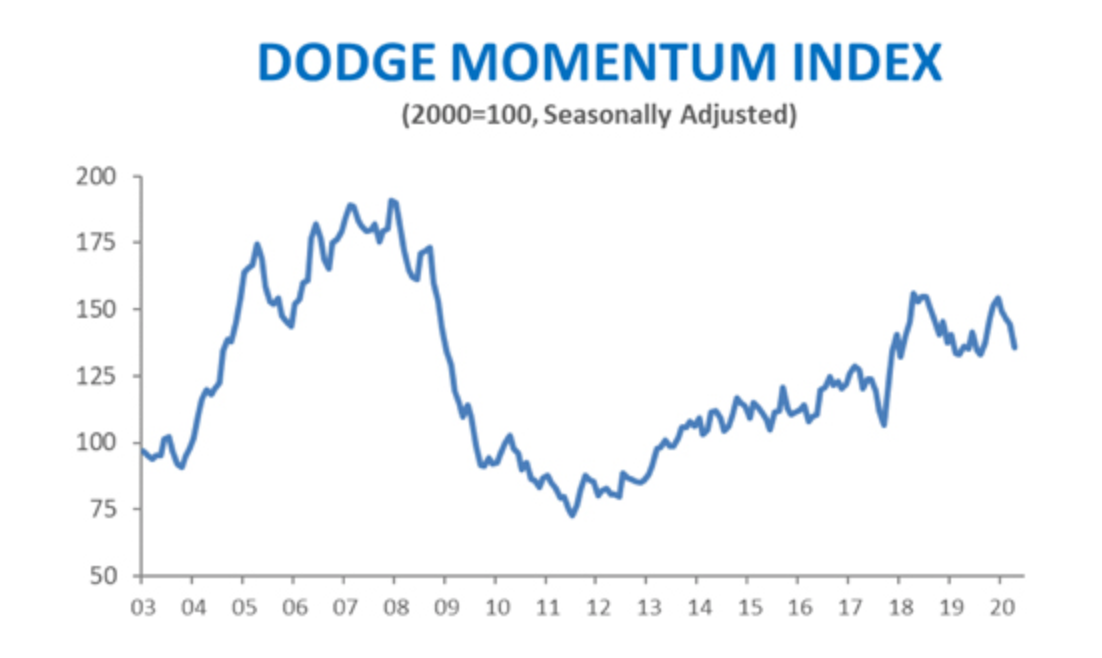 “We’re watching the value and number of projects entering the early stages of planning in our network as measured by the Dodge Momentum Index,” Branch says. As reported in May, the index moved 6 percent lower in April to 135.9 from the revised March reading of 144.5. Since the index is a rolling three-month average, Dodge says it expects an even weaker reading when the May data is released in June.

“Even though parts of the country are beginning to reopen, and some areas that had paused construction are now restarting, it will be a very long road back to normalcy for the construction industry,” Branch said in comments made when Dodge released its April construction starts data. “Continued fear of a resurgence in the virus will lead to a continued reduction in economic activity over the coming months, affecting construction projects across the country. The economic and construction recoveries will remain sluggish until a vaccine or viable treatment becomes available.”

Basu is keeping a close eye on post-pandemic business closures. “How many enterprises fail to emerge post crisis will tell us how long it’s going to take us to get back to near where we were,” he says. This information is captured in various ways, including office vacancy rates, large-scale bankruptcies and unemployment.

A downturn in three stages

As this story was written, the construction industry was nearing the end of what Basu sees as the first of three phases of the downturn. In this phase, contractors in some areas were forced to shut down operations because they were not considered essential businesses. Other contractors had operations reduced as they complied with COVID-19 safety protocols and slower permitting and inspections. “This serves as the foundation of the broader downturn to come,” he says.

During the second phase, project owners will seek to renegotiate contract terms for better prices. “Now that the second quarter of 2020 will be the worst quarter of our economic lives, project owners believe that contractors are going to be much more eager to secure work going forward,” Basu says.

“And force majeure clauses [in contracts] now permit owners to postpone or even cancel projects without paying normal contractual penalties because they can point to the pandemic as the cause of their action.”

“It’s pretty clear that this dynamic will be unleashed in the private sector, which will take a long time to fully heal,” Basu says.

The public sector remains a wildcard, dependent on a federal rescue, Basu says. “Public sector finances have been smashed during the crisis,” he says. “All types of tax revenues have been diminished, creating large financial gaps in state and local governments, which have to balance their budget every year.”

“I’m looking closely at state and local revenue sources,” Simonson says. “States are reporting pretty drastic drops in gas tax receipts. We were seeing a big jump in highway bid lettings and highway construction work, but soon this drop in fuel tax revenues is going to cause many states to start reducing the number of projects they put out to bid.

“Local governments are going to be scrambling to cut budgets and it’s always easier to cut something that hasn’t started, like a construction project.”

Other transportation concerns are the drop in toll revenues as people have been urged to stay at home and the severe decline in airline passenger traffic. Airports depend on landing fees, airline gate rentals, parking fees and consumer spending in terminal shops, Simonson notes. “All of those revenues are down so sharply that I think many of the projects that hadn’t yet started are going to be on hold for a long time.” And airports are also asking the question of how long until traffic returns.

That several public works projects are continuing does not mean that contractors who do public work are home free, Simonson says. This will be especially true if a federal infrastructure spending bill does not happen.

One tax revenue may escape unscathed: property taxes, which finance schools. Simonson sees school construction being an exception to the state and local construction downturn.

Telecommunications construction, although a small segment, will also see growth as the need for high-speed internet has been underscored throughout the pandemic.

Comparison is inevitable between the Great Pandemic and the Great Recession. But, Branch says, “the depth of this crisis has made this event unlike anything seen before.”

The Great Recession also was more gradual. “Thankfully, in this past cycle there has not been the same level of overbuilding in the building sectors that we saw then, indicating that as long as projects continue to enter planning on their current pace, construction could start to see recovery in the third and fourth quarters,” Branch says.

As the nation makes its way into the new normal, fundamental questions will be asked. Do we still need huge arenas, dorm rooms and classrooms? Should a restaurant open in a new location?

“In category after category there are going to be these calculations about both financial wherewithal and the need for a facility,” Simonson says, questions that could put a hold on new projects. And the shift to online buying is now in overdrive.

“I think construction is in for a slower recovery than many industries,” Simonson says. “Owners are going to find that they have much less money available for construction, and much more need to spend money on other things.”

But what’s especially worrisome is the loss of even more workers.

Basu adds: “We might see a migration of some of the industry’s best workers. An even larger scale issue is who will remain available to the U.S. construction industry.”

It will probably take until the end of 2021 before the pain starts to ease for construction, minus a few bright spots, say many of our experts.

Residential construction, in addition to possible federal infrastructure spending, could be one of those bright spots.

“I’m hopeful that all of those would-be homebuyers who were starting to look at housing, that they’ll start to feel comfortable again,” Simonson says. “I think we will still have a pretty robust single-family housing market, which may lead to the possibility of a faster construction recovery.”

And we haven’t even mentioned the presidential election, which adds even more ambiguity.

“This means the politics and policymaking of 2021 will be uncertain until after the election,” Basu says.

“But from an economic perspective, 2020 has been lost to us.”