How construction contractors can use mechanic’s liens to get paid

As the economy continues to decline amid uncertainty surrounding the COVID-19 coronavirus pandemic, more and more contractors will have trouble getting paid, says Levelset CEO Scott Wolfe.

His company provides an online service to help construction businesses file mechanic’s liens, which are designed to protect payment rights for work performed or materials supplied.

Levelset has seen a doubling of the number of mechanic’s liens filed through its system since the coronavirus pandemic began. He warns that contractors need to be prepared to protect themselves by not only filing a mechanic’s lien but by making sure they preserve the right to file one should it be needed.

“In an environment like today, where small businesses are really strapped for cash and we’re going to see an increase in companies that go insolvent, if you don’t have a lien, you’re going to be stuck,” he says. “If you do have a lien, you have more options.”

How a mechanic’s lien captures payment

Wolfe calls the mechanic’s lien “the unsung hero of liens.”

“It creates a liability for other people on the job,” he says, instead of just the company or person you have a contract with. That’s because the lien is attached to the property itself. The property could even be foreclosed upon if the debt is not paid.

The filer makes the property owner, the lender and the general contractor obligated to your debt, even though you don’t have a contract with them. “And that’s what makes them so powerful,” Wolfe says. “Anybody who provides materials or labor to a job, can use the property itself to pay them if their customer doesn’t pay them.”

He adds that filing a mechanic’s lien often leads to getting paid without having to file a breach-of-contract lawsuit. “And that’s a much more accessible and agreeable way to get an unpaid debt paid, to just file a simple lien versus having to start getting your army together to go to court.”

Figuring out how and when to file a mechanic’s lien can be a complicated process. Each state has different requirements, and contractors need to be aware of what to do before a lien can be filed.

For example, many states require that a preliminary notice be mailed to the company you are contracting with or that you are providing goods or services to. That notice typically should be mailed the moment work begins or supplies are delivered.

Wolfe advises construction businesses to always file a preliminary notice on jobs in states where it is required for a mechanic’s lien. The notice protects your right to file the lien, should one be needed. It also can speed up payment. That’s because it sends notice that work has begun.

“When a property owner or lender or GC gets these documents, it helps them administer the job,” Wolfe says. “… If you send them those notices, it makes their job easier, and that’s what makes the payment go faster.”

Still, for contractors who have worked with the same companies and built long-term relationships, there might be reluctance to send a notice.

“It’s a common misperception that it causes friction,” Wolfe says. “… Companies send these things as a matter of course. If you’re in a state that requires preliminary notice, that project owner is getting preliminary notices. They’re very, very common.”

Also, having come off booming construction years, getting paid has not been as much of a problem. Preliminary notices might have only been sent for customers with higher credit risks, but now, more projects are at risk, even those that seemed secure.

“One of the challenges with payment in construction is that there are so many things that are out of your control,” Wolfe says. “You may know your customer, but the fact is that payment is actually affected by people on the job that are completely disconnected from you. And that is something that becomes exasperated in an environment like this.”

When to file a mechanic’s lien?

“The moment you’re owed money, and it’s unpaid, you have a lien right,” Wolfe says.

However, as with most aspects of the mechanic’s lien process, the rules vary by state.

One of the big differences is when a lien must be filed. Time variances can be anywhere from 60 days to a year from when the job was completed. After those time frames, lien rights expire.

Levelset offers construction businesses a way to file mechanic’s liens online. The contractor picks the state the job is in, and the system guides the user through the online filing form, similar to how TurboTax does for filing taxes.

Wolfe formed the company in 2008 after his native New Orleans was slammed by Hurricane Katrina. His law practice was seeing many construction businesses unable to get paid, then the housing crisis hit. The service was originally called zlien but changed its name to Levelset last year. In December, the company landed $30 million in investment to expand the business. The company says more than 500,000 contractors and suppliers use its services.

Due to the coronavirus pandemic, Levelset has reduced the price of its service by $150, making it possible to file a mechanic’s lien for $199 by using code “COVID19.” The price includes the county jurisdiction’s filing fee, Wolfe says. A lien can be filed within about 5 minutes, according to the company.

The Levelset website also provides other resources to help contractors, at no cost, including forms for preliminary notices, lien waivers and notices of intent to lien. It also provides data on how quickly, or slowly, large contractors pay their subs.

Filing in a pandemic

Because of COVID-19, some county offices around the country are closed or have scaled back operations, which can make filing a mechanic’s lien more of a challenge. Levelset is keeping track of those and offering advice on how to file in those counties.

Wolfe says that before the pandemic, most counties around the country already offered electronic, online recording. However, these systems are not typically open to the general public, only to approved submitters, which Levelset is.

He reiterates that filing mechanic’s liens now is more important as the economy slows. When the economy picks back up, those who filed liens will likely get paid quicker, he says.

“You have jobs right now that are being delayed or canceled. You have payment that is being clogged up because of a job being delayed, or the people who were supposed to make payment, their financial situation is upside down,” he says. “And that’s leaving a bunch of contractors, suppliers, equipment providers in a situation where they’re suddenly coming to terms with whether or not they have any rights. They may not have been protecting themselves four months ago, so they’re left with, maybe not having the right at all.” 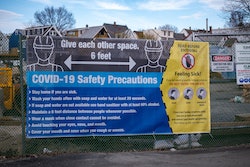 A deep dive into coronavirus guidelines for construction sites 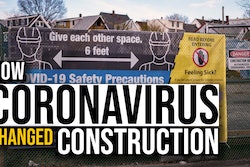 How the Coronavirus Pandemic Has Changed Construction Work

How construction contractors are working safely amid coronavirus threat