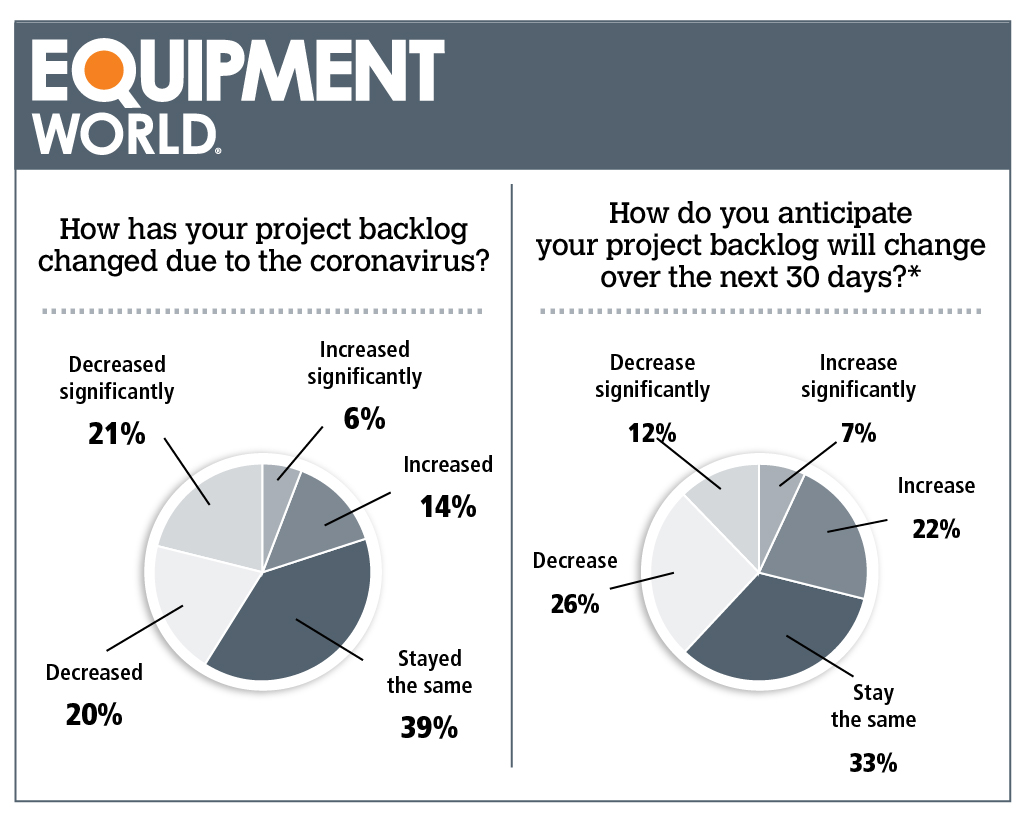 As contractors make their way through the COVID-19 coronavirus pandemic, opinions on how it is affecting project backlogs both now and in the future seem to holding steady, according to the second weekly survey by Equipment World, conducted  Apr. 3-8.

In contrast, 20 percent of respondents said they had seen some sort of an increase in project backlogs, with 7 percent of those saying those backlogs had “increased significantly.”

Respondents reported difficulty in getting code officers to respond, in parts availability and in getting permits from closed municipalities. “Once municipalities and agencies reduce or stop their inspection services it will begin the downward trajectory for our industry in southern Nevada,” says a utility contractor.

There was a definite wait-and-see tone to some comments: “It’s too soon to tell,” said a South Atlantic region contractor. “We have quoted several jobs that we do not figure will be constructed.”

And one specialty contractor told us that while new home construction has slowed, “repairs to septic systems have increased with increased usage by everyone being home.”

(This survey, which had 141 respondents, is the second in a series of surveys that Equipment World and other Randall-Reilly brands are using each week to gauge market sentiment. To participate in the next survey, go here.) 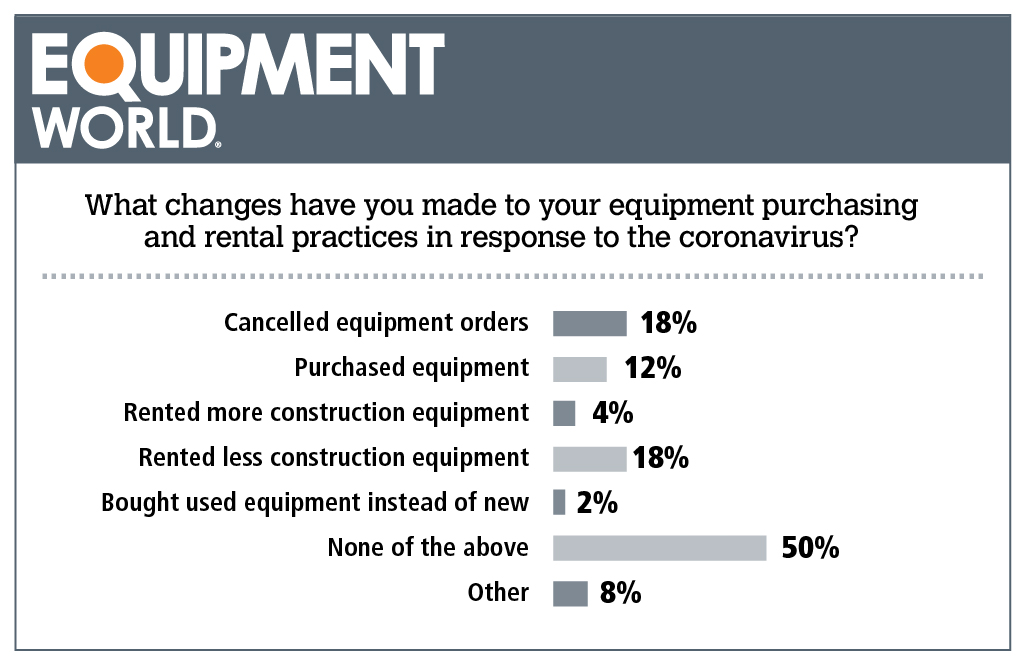 We took a deeper dive into what’s happening on the equipment front, asking contractors if they’ve bought equipment, cancelled orders and rented more or less equipment in response to coronavirus impacts.

The number of respondents who cancelled equipment orders remained steady from Week 1 of the survey to Week 2: 19 percent in Week 1 and 18 percent in the second week. In this week’s survey, we also asked if respondents had purchased equipment, and 12 percent said they had.

Respondents who say they are renting less equipment nudged upward from last week, with 18 percent saying this had occurred compared to 14 percent the week before.

Many respondents, however, seem to be staying the course, with 50 percent saying they had done “none of the above.”

“Prior to the pandemic, we had projects in the backlog that required us to buy additional equipment,” said a larger excavating contractor. “As of today, we are still moving forward with the purchase.” Another said he was taking advantage of lower interest rates and prices.

Uncertain times are causing pullbacks, though. “We are renting less, partially because of less work and partially because we are utilizing our own equipment even though it may not be ideal,” said a commercial building contractor in the East North Central region. “We also cancelled plans to purchase several pieces used equipment this spring.”

A Pacific region roadbuilding contractor told us: “We’re holding off on finalizing one purchase, and waiting to sign an order on a second machine until we have a clear understanding of what decisions the government will take on COVID-19.” 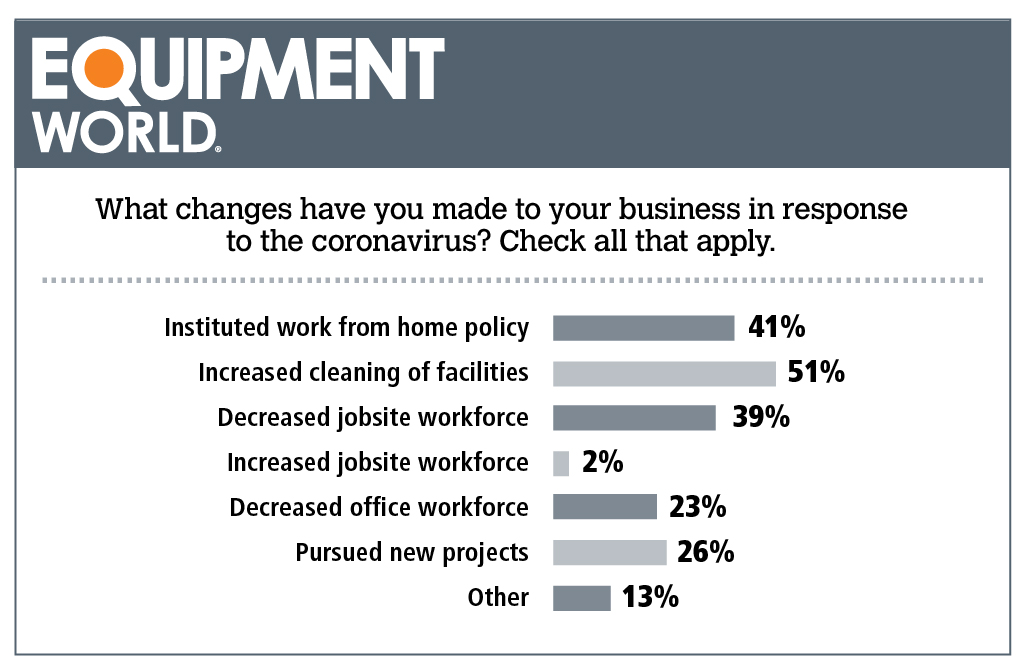 Respondents seemed slightly less prone to reduce jobsite workforces in Week 2 of the survey, with 39 percent saying they had done this, compared to 42 percent the week before.

The trend towards keeping staff in place was more pronounced when it came to office personnel: 23 percent of respondents in Week 2 said they had done this, compared to 34 percent the week before.

And more respondents are pursuing new projects, with 26 percent indicating they were doing this, compared with 21 percent in Week 1.

When we asked our respondent’s outlook for the coming 30 days, the sentiment still remains split, with answers varying less than four percentage points from the prior week in all answers.

“We are able to do absolutely nothing and I don’t expect that to change,” an East North Central excavating contractor said. “It will probably stay the same in public works, but most likely will drop off substantially in the private sector,” said a Mountain Region utility contractor.

Others are much more optimistic: “People are bidding like nuts and we’re being told to prepare for a giant wave of work,” said a Pacific region specialty contractor.