While most of the talk revolving around increased cost and delays due in the U.S. construction industry pertains to the industry’s rising shortage of skilled workers, there’s another shortage currently taking a fairly hefty toll on the builders of the nation’s tallest buildings.

According to a report from the Wall Street Journal, a shortage of glass is “adding millions of dollars to the cost of new skyscrpers and halting some projects midway through construction.”

The paper says glass manufacturers simply haven’t been able to keep up with the renewed demand for metal-framed glass panels, also known as curtain wall, brought on by the fastest rate of office tower and apartment construction since the early 1990s.

The primary effect on builders has been a 30-percent price increase on curtain wall in the last 18 months alone.

Meanwhile, some builders in city’s like San Francisco have had to halt construction while they wait for the glass panels to arrive.

Making matters worse, nearly a quarter of all curtain wall manufacturers closed during the recession. And starting one of those shuttered facilities back up is a bit harder than simply cutting the power back on, as the WSJ explains:

“The glass that ends up on the outside of an office building is manufactured in giant tanks in which sand is melted at temperatures north of 2,000 degrees Fahrenheit. Long ribbons of raw glass are floated down a river of molten metal…Building a new plant can cost hundreds of millions of dollars, PPG says, and restarting an idled line can take months because workers have to jackhammer thousands of pounds of hardened glass to remove it from melting tanks.”

However, some developers have been so impacted by the glass shortage that they’ve decided to start their own manufacturing operation. You can read more here. 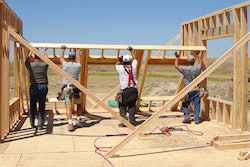