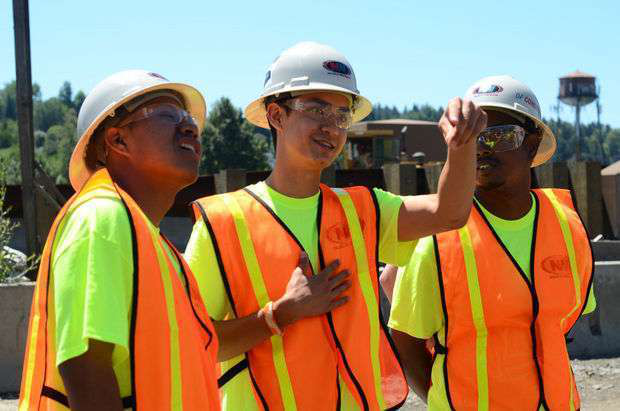 Students marvel at construction equipment at a jobsite in 2013 of the I-84 Sandy River Bridge in Oregon as part of a pre-apprenticeship program. Credit: Sunny Strader/The Oregonian

The Wall Street Journal had an interesting article Thursday describing how a wire factory in Georgia employed high school kids during the summer to help develop their work skills and improve their attitudes and academic performance.

The program has the kids do fairly simple tasks in the factory for pay four hours a day and then puts them in an on-site classroom with a traditional teacher for four hours of regular academic coursework—for pay—to fill out the rest of the day.

While factory work is better suited to this kind of program than construction work, there are several elements to this approach worth thinking about.

When contractors complain about the lack of skilled labor, what they often mean is the lack of young people with a work ethic. Skills can be taught—a work ethic has to be developed.

In generations past, kids learned their work ethic helping out at the farm, or working alongside their dads, or in the family business. That doesn’t happen much anymore and public schools aren’t equipped to correct this, since it is more of a social problem than an educational one. But put a little cash in their pocket, and most teens start to pay attention.

Also, by dividing up the day between four hours of work and four hours in the classroom, this program makes the connection between learning and their job. It motivates kids to go back to school with a better attitude and perhaps set some goals for the future. Eight hours of work a day or eight hours of classroom study is really too much for a lot of young people. The 50/50 split makes for a good day. Half brawn, half brain.

This type of approach is probably best suited to larger companies, and any work you have teens do in your company needs to be safe and age appropriate. But a lot of successful people in this world have started out sweeping floors and cleaning parts, stacking lumber, washing cars and equipment.

The four hours of classroom time would be the toughest part for any contractor to come up with. You need certified high school teachers for that. But most school districts have summer school. Lots of teachers make extra money doing part time work in the summer. Maybe it’s time you had a talk with your local school principals.

As we’ve said before in this space, the key to workforce development in the future is to grow your own. The social forces that have caused teens to lack a work ethic are too deep for government institutions to do much about. The schools aren’t going to start pumping out highly motivated, eager-to-please, eager-to-learn teenagers anytime soon–probably not in your lifetime, maybe never again.

If you want change, be that change.