In 1958 Deere & Company’s board of directors approving a radical and forward thinking design for it’s new Administrative Center, now the company’s world headquarters and one of the Midwest’s top architectural landmarks.

The building, which opened in 1964, was the brainchild of William Hewitt, Deere’s president at the time, and the world-renowned architect Eero Saarinen of Finland. Saarinen chose Cor-Ten steel to frame the structure, which previously had been used for tanks and rail cars, but never in a building.

Not only modern in appearance, the building was decades ahead of its time in terms of energy efficiency and lighting. Saarinen’s design favored the clean, hard lines of the International Style, but for contrast cradled the building into the land’s soft green hills and lush hardwood trees, many of which were protected during the construction process.

Some were skeptical, fearing the radical and expensive design might seem ostentatious to Deere’s core customer–the farmer.

Adjacent to the employee cafeteria, a sky-lit atrium serves as a multi-level indoor botanic garden and a pleasant interlude of green during winter’s long, gray months. To ensure as many employees as possible enjoy sunlight and views to the outside, office spaces in the general work areas were laid out around the periphery of the building.

When Hewitt and Saarinen presented plans for the building to the board of directors in 1958, some were skeptical, fearing the radical and expensive design might seem ostentatious to Deere’s core customer—the farmer. But Hewitt had his eye on the future. He stressed that this building would send a message to the world that Deere was a forward looking company and that it would also help attract a high caliber of engineers and employees to the company.

Hewitt was part of what we now call the Greatest Generation. After serving four years in the Navy during WWII, he quickly rose to the top at Deere. His leadership also steered the company into a global role with the purchase of a German tractor factory and land in Mexico for a new tractor facility. Today his building not only houses Deere’s Moline-based employees, but has been expanded and updated with collaborative workstations, telecom conference centers and laptop docking areas to accommodate the company’s globe-trotting workforce. 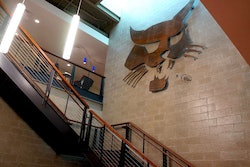 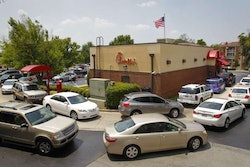 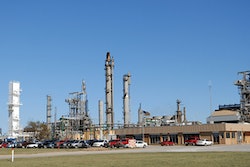