Approximately 200 construction workers will receive $3.8 million in back wages and fringe benefits after a settlement between the U.S. Department of Labor and MDG Design and Construction for wage violations at the federally-assisted Grand Street Guild construction project in New York City.

MDG had previously repaid more than $1.1 million in back wages to about 300 laborers and mechanics who worked on the project, which renovated three 26-story apartment towers for affordable housing on the city’s Lower East Side.

After three workers filed a class-action suit, the DOL’s Wage and Hour Division found that MDG allowed subcontractors to commit Davis-Bacon Act violations, including the failure to pay the required prevailing wages and submitting inaccurate or falsified payroll records to the government.

Settlement terms require MDG to implement an enhanced compliance agreement, including retaining an independent monitor to conduct reviews of the company and subcontractors for a three-year period and report the findings to the Wage and Hour Division. 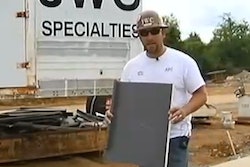