After a thief made his way onto Murfreesboro, Tennessee jobsite for an elementary school and then made off with between $6,000 and $8,000 worth of metal roofing, JWC Specialties project superintendent Jason Johnson decided to put in a bit of overtime.

Telling WSMV TV that he knew reordering the materials would put he and coworkers behind, Johnson did a bit of detective work to get the roofing back. “I hate a thief, man,” Johnson told WAFB. “I hate for someone to steal something that’s not theirs.”

Johnson took samples of the roofing that was stolen and went around to scrap yards in the area telling workers that if anyone came to sell that particular type of roofing, it had recently been stolen from JWC.

Soon after, Johnson and the police received a call from managers with Mid Tenn Metal Scrap Yard when the suspect tried to sell them the material. JWC got its roofing back and before the suspect fled the scrap yard, workers there had already taken down his name, licesnse and tag number.

Johnson said the scrap yard was only 10 minutes down the road.

Police are now investigating whether the suspect is responsible for several other recent jobsite thefts in the area. They’re also increasing patrols around the school jobsite as last month a generator and thousands of dollars in cash were stolen from the site as well. 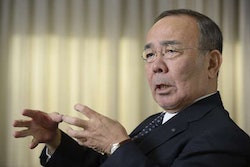