Baseball Hall-of-Famer Yogi Berra is famous for confusing quips, such as “When you come to a fork in the road, take it.” While he was giving directions to his house at the time (either route would get you there), that strange piece of advice might actually apply to picking the right trailer for your operation. 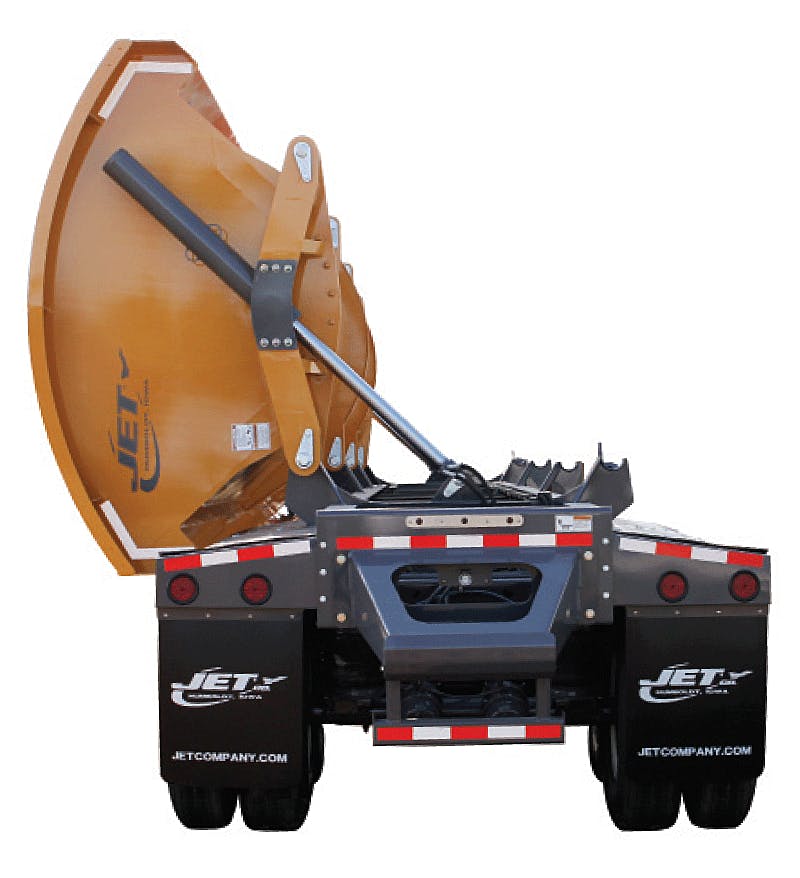 Jet’s side dump includes a trunnion-mount setup for the hydraulic cylinders, in order to add leverage on the bucket, and
improve stability when unloading material.

Considering all the choices, it’s no simple matter, and one direction might work as well as another. The right one for your particular situation depends on several variables: the payload material, job location, and design features of a given trailer, just to name a few. Like mapping out alternate routes to a jobsite (or Yogi’s house), all of them might get you there, but one could be more direct, while the other smoother and easier to handle. It’s really the details that make the difference, and what suits your particular needs.

Know that there’s much more to this subject than the basic configurations in end-, side- and bottom-dump trailers. As we dig into the specifics, it becomes clear that not all trailers are made equal, even within types. Along the way, we’ll weigh several factors, such as cost, safety, utility, load weight and capacity. All of which can help you take the better fork in the road when it comes to picking trailer types.

Stating the obvious, and as indicated by their respective names, end-dumps pour their loads out the back, while side-dumps tip material out to either the left or right. And bottom-dumps have a clamshell gate underneath the trailer. When the clamshell opens, material flows out and can be laid in a row, or spread evenly across the rear of the trailer when it opens front to rear.

Starting at the end

Usually end-dumps have higher sides and thus carry more cubic yards of material, but not necessarily more weight, especially when they’re made of aluminum. (Some, though, are made of AR400, a heavy-duty abrasion-resistant steel typically seen on side-dumps, and the same material used on certain armored military vehicles.) 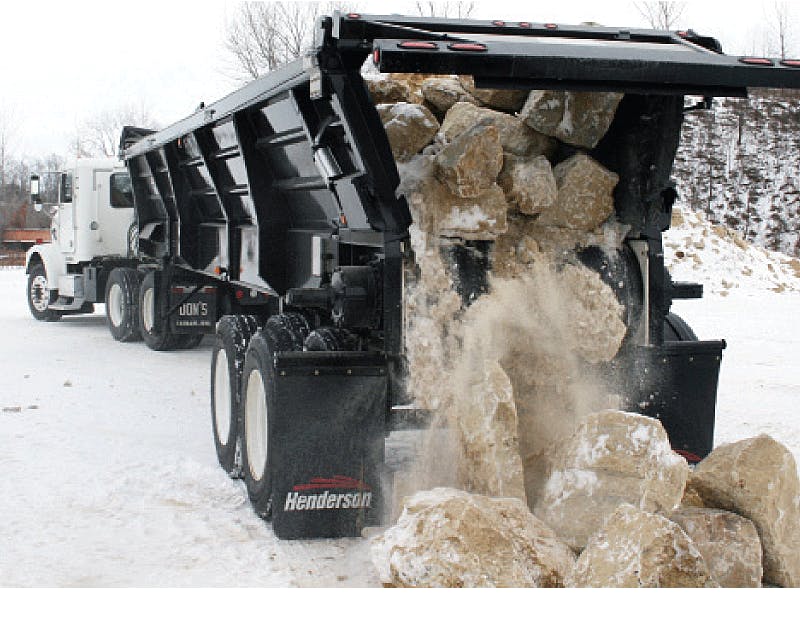 Henderson’s BlackBelt live-bottom system puts a fresh spin on the traditional end trailer. It can handle larger rock as show here, not only because the 54-inch belt is wider, but also has a 75-percent wrap on the rollers and an automatic tensioning system to match the load.

“The end dump allows easier placement of materials, especially when you’re needing to make piles,” says Jeremy Smulder with Duraclass. Creating piles is something side and bully dumps don’t do as well, he says.

End dumps, however, have a reputation for a lack of stability when the front of the bed lifts skyward to unload material, as the trailer can get tippy and even fall over. That higher risk element can result in higher insurance premiums, affecting overall cost of operation.

Newer types of end dumps have a live-bed with a conveyor belt that moves the load out the gate without having to elevate the trailer. Henderson Products takes that process even further with its BlackBelt system, which is wider (54 inches instead of the standard 36 inches), so it’s not limited to finer rock sizes. To ensure longer life in handling a wide variety of materials, the system’s LSBT (Load Sense Belt Tensioning) also tightens the belt to match the load it’s moving and then releasing the tension once complete.

“There’s a lot of variations in end dumps,” notes Henderson’s Brian Evans. “We feel that this gives us the best of both worlds.” He cites the system’s ability to dump only a portion of the load at a time, and handle stickier materials such as snow, asphalt, and bottom ash.

Side-dumps have their advantages, yet there’s a regional aspect to their use. “They are found mostly in the Midwest and West,” points out TrailKing’s Dean Badinger. “End dumps are more traditional back East, especially in confined spaces or for stockpiling aggregates in bunkers.”

SmithCo’s side-dump design features abrasion-resistant AR400 steel for the tub, and T1 steel for the I-beam frame, which reduces weight to allow for a bigger payload.

Gary Kuehnast of Jet Company confirms the geographic variation in trailer types. “East of the Mississippi, side dumps are limited,” he says. Noting the issue of maneuverability, he adds that, “End dumps are used for hauling into a pit or hopper. And in the West, side dumps are for building roads and other types of construction, and at oil fields in North Dakota.”

The road-construction use is partly because the side dumps can lay a row of material, even over a Jersey barrier, without having to blade it, while traditional end dumps typically leave a large pile all in one place that then has to be repositioned. (Except those equipped with a live bottom, which allows partial unloading.)

Another reason for this regional difference is weight regulations, says Rick Lawrence of SmithCo, which manufactures side-dump trailers. “A lot of eastern states have weight laws that don’t follow the federal Bridge Formula,” he notes. That means contractors in the East can’t run doubles like they do out West, so they need the larger payload capacity seen in most single end-dump trailers.

The Duraclass Bedrock end dump has an elliptical radius to prevent material hang up.

Clement Industries’ Bill Garrison adds that urban congestion, especially in the East, is another point in favor of end-trailers.

Getting down to the load specs, Kuehnast acknowledges the limitations of a side-dump. He admits that a 36-foot end trailer can carry as much as 36 cubic yards, while Jet’s same size of side-dump typically handles only 23 yards. But he counters by pointing out, “One of the biggest things with a side dump is better stability.” Another argument, he says, for a side dump: stronger construction and reduced cost, when compared with aluminum trailers. 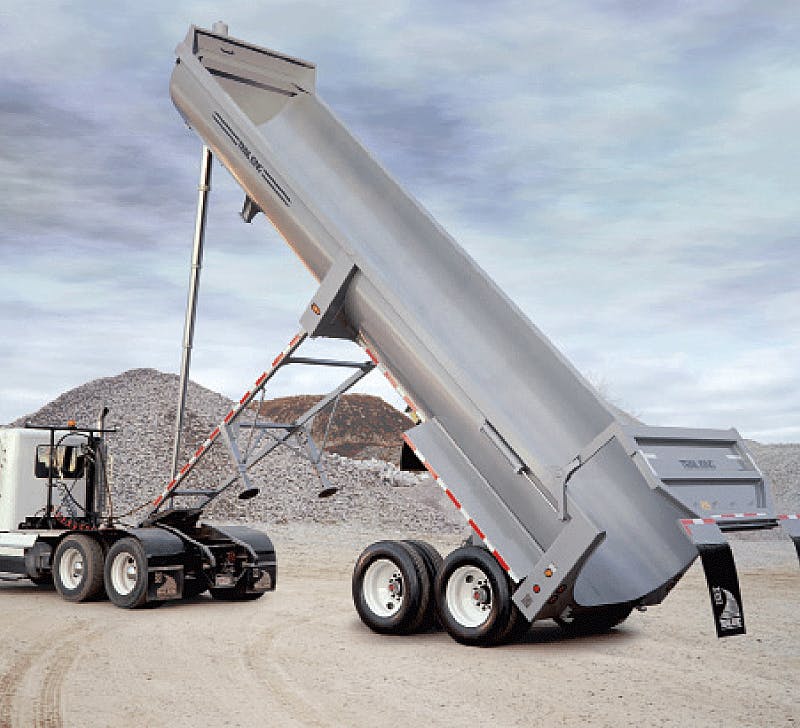 SmithCo’s Lawrence brings up an additional advantage: “While a side-dump can’t compete with an end-dump in terms of height of the trailer sides, you can make it up in length.” SmithCo offers side-dumps up to 53 feet in length, or they can be run in trains (at least out West). The company’s side-dump design also differs from other side dumps by using AR400 steel for the tub, but T1 steel for the I-beam frame, resulting in a trailer that’s 200 to 2,000 pounds lighter, allowing for a bigger payload.

Side-dumps are particularly popular for highway construction, and shoring up levees with rip rap and large rock, as they can quickly lay a row of material on the edge of a road bed.

Jet’s side-dump design has patented features, such as a trunnion-mounted cylinders (instead of frame-mounted). This setup lifts from the bottom, allowing for a slightly smaller 58-degree angle off vertical for better stability and a geometric advantage. Other benefits of the Jet configuration include reduced sideways rocking motion when unloading, along with external tub supports, so there’s no need for a center divider.

The lack of a divider makes it possible to handle poles, trees, and other elongated material. In addition, TrailKing’s Badinger points out that, “Side-dumps are better for excavation, and handling rip rap and boulders. Aluminum end-dump trailers get dented with boulders.”

Beyond the specific applications mentioned above, SmithCo claims there’s no limitation to the uses of side-dumps. “We have a side dump for every application,” says Lawrence, pointing to the company’s dozen or so different models that can handle a diverse range of materials. And he emphasizes another key advantage – no leaking or spillage. “Our side-dumps are watertight, avoiding hazmat concerns.” 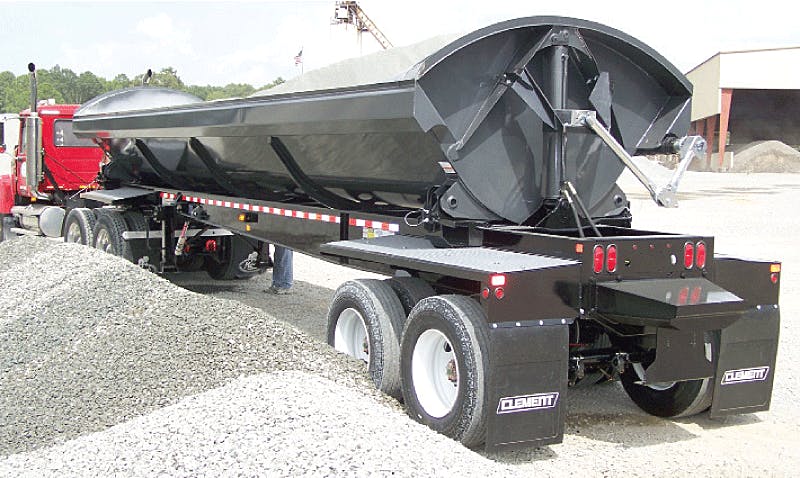 Stepping back from the wide range of choices and options in both side- and end-dump trailers, one type we haven’t touched on is the bottom dump. Clement Industries offers all three main types of trailers covered here, but Clement’s Bill Garrison feels that in most cases, the bottom dump is better for the majority of applications.

“It’s the most efficient way to haul material,” he asserts. “It can haul anything and go anywhere.” Also, he adds there since it doesn’t rely on hydraulics, but has all air control instead, so maintenance costs are lower.

Generally speaking, the most common applications for bottom dumps are for stockpiling, material transport and asphalt paving. While some might question their utility in stockpiling, bottom-dumps have quick turnaround times as they can be driven through the dump zone, basically without stopping. Then a loader or bulldozer moves the material to the stockpile area.

Even so, Garrison recognizes the recent advancements and benefits of both end- and side-dumps. He says the latter type fits in the middle between bottom- and end-dumps, noting that while it’s not as fast as a “blow and go” bottom dump, it is a quick way to move material. As a result, “Side-dumps are now doing most of the work of end-dumps,” he asserts.

But he still feels the end-dump trailer has its place, particularly for heavy loads. “You can get an end-trailer that’s really long and big,” he says.

Currently Clement doesn’t offer a live-bottom system, but it’s in the works. “For instance, in the ag business, a live bottom is the answer,” he says. In the meantime, how does the company address the tip-over risk when the bed tilts up?

“We offer a stability control system,” he notes. “It only adds about $1,000 to $1,500 to the overall price.” That’s not out of line, considering the financial impact of just one tip-over.

After considering all of the types and aspects of trailer designs, taking Yogi Berra’s fork in the road starts to make even more sense. But before you do, review your operation’s geographic area, type of materials, and unloading limitations. And there’s one more Yogism to remember when it comes to analyzing your needs and decision time: “You can observe a lot by watching.” 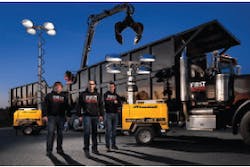 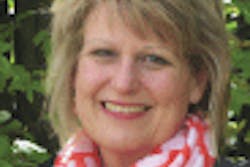 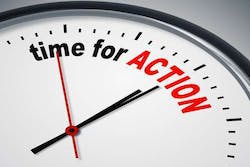 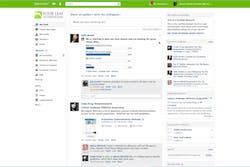