Barko says its new truck/trailer-mounted B Series merchandising loaders are easier to service and offer better durability and protection for wiring.

For easier maintenance, Barko has relocated the fuel filters, made access to the electrical easier and has redone the routing of wires to provide better protection. The company has also boosted durability of the hydraulic cylinder with a new design.

From vacuum-powered lifts to platforms with easier access, these 10 attachments for loaders and telehandlers are designed for grabbing, hoisting or working at lofty heights.

Production on most of Ford’s F-Series trucks has been suspended following a major fire at a Michigan parts supplier that deals with several OEMs.

However, despite the temporary shutdown, Ford told reporters during a press conference call that its truck inventory is large enough that sales will not be affected by last week’s blaze at Meridian Magnesium Products of America’s plant in Eaton Rapids, Michigan.

Unveiled at the same media event as the new DA30-5 articulated dump truck was a new Doosan material handler with a steel track undercarriage.

New York City you say? Well, if you happen to see the 122-year-old Korean company’s logo on a banner in Yankee Stadium this summer, that will explain the press conference venue. But there was a new articulated dump truck and a beefed-up telematics platform to talk about as well.

The hydro-gas cylinders are connected to pressure accumulators and replace the earlier versions’ shock absorbers and rubber springs. The front suspension is also self-leveling, and the driver can change the ride characteristics of the truck by adjusting the pressure. In the long run, the adjustable suspension and smoother ride is more advantageous to productivity, says Aaron Kleingartner, marketing manager.

Doosan also improved the capabilities of its unique rear tandem/single rear axle/tandem bogie drive system by bringing the design and manufacture in-house rather than off-the-shelf. Instead of six brake systems the new tandem only has four, which reduces maintenance. The new design also uses a common oil in the tandems and rear differential to make inventory and service intervals less complex. 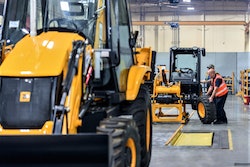 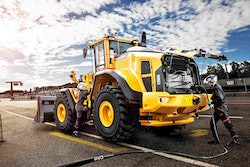 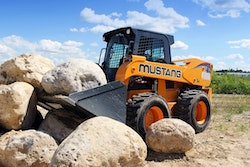