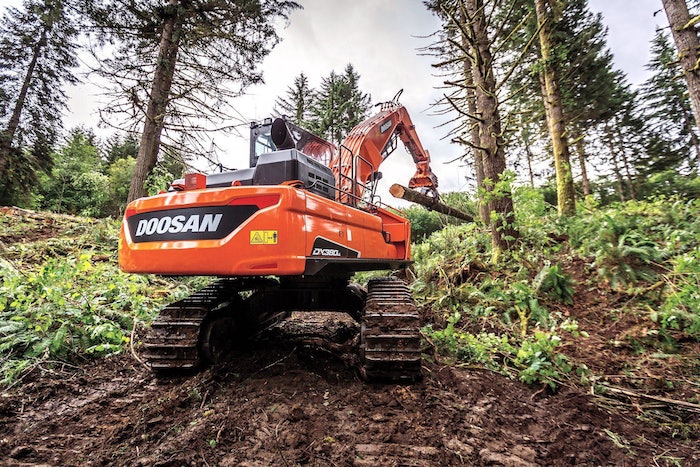 Doosan has added a new size class to its lineup of log loaders with the introduction of the DX380LL-5, its largest machine yet in this category.

Powered by a Tier 4, 318-horsepower engine, the DX380LL-5 boasts high swing torque and approximately 44 feet of reach at ground level.

The machine weighs in at 113,500 pounds and has a lifting capacity of 42,580 pounds over the front at ground level.

Like the recently upgraded DX225LL-5, the DX380LL-5 features four work modes for matching engine and hydraulic output to the job at hand. Further saving on fuel use is a new auto-shutdown system, which shuts down the machine once a preset idle time is met. Operators can adjust this idle time from three to 60 minutes.

The California Department of Transportation’s (Caltrans) Division of Equipment has designed and custom built 14 snowplows, which it says has saved them 33 percent compared to purchasing commercial versions.

To these trucks, the division added infrared pavement thermometers, backup cameras, high-speed attenuators, high-visibility striping and larger plows. Division employees also did all wiring and welding on the machines.

“We build it stronger than most of the stuff you see out there, so it lasts longer,” says Paul Hellwig, Caltrans heavy equipment mechanic fabricator.

In an effort to allow its dealers to offer greater support to customers using 3D digital models and GPS technology for grading, John Deere has announced a partnership with software developer AGTEK.

Deere is integrating AGTEK’s Earthwork 4D site modeling software into its WorkSight telematics dashboard in an effort to “ease the takeoff and modeling process across jobsites of all shapes and sizes.” Deere adds that the partnership will allow contractors to “reduce equipment and labor costs with a streamlined grade-control process…capable of quickly adjust 3D maps to keep construction projects moving forward.”

While rugged phones like Cat’s S60 and Samsung’s Galaxy S7 Active are great smartphone choices for those in construction and the trades, the vast majority of workers and operators on jobsites around the country are using iPhones and Android phones that require a bit of protection in order to make it through the rigors of the job in once piece.

As we do each year, we’ve rounded up our top picks in smartphone protection. But this year we’ve expanded our roundup a bit to include battery cases, thin cases and waterproof cases. Check them out here.