Massive flooding in southeast Texas from Tropical Storm Imelda closed roads, led to hundreds of abandoned cars and caused nine barges to break free, at least two of which struck and damaged a major bridge on Interstate 10.

On Sunday, the Texas Department of Transportation said inspectors were scanning the underwater portions of the bridge with sonar to map out its current state, and the agency has asked drivers to avoid the area. “Once it is deemed safe to do so, divers will inspect the underwater portions of the bridge as well,” the agency said Sunday. “TxDOT traffic engineers and bridge team are exploring options to restore traffic to the area. Those options can only be implemented if the final inspection can confirm the safety of the potential routes.”

On September 24, TxDOT Houston reported that it is “continuing to make modifications to the bridge as part of efforts to accommodate two-way traffic,” and it hoped to reopen the bridge to traffic “in the coming days.”

The Houston Police Department reported that as of 10 a.m. Friday it had towed 1,651 vehicles abandoned in medians, parking lots and roadways because of the flooding. The Harris County Sheriff’s Office reported that as of 2:25 p.m. Friday, it had performed 425 rescues in swift currents in neighborhoods and dealt with 365 stranded vehicles. The storm has also claimed five lives.

The National Weather Service office in Houston reported 72-hour rainfall totals Friday as high as 29 inches in some areas, with flood warnings in effect in some parts through the weekend.

Houston recorded its wettest September day on record, at 9.21 inches, on Thursday. Though high, that’s still 7 inches less than was dumped on the city during the city’s heaviest rain day on record, August 27, 2017, during Hurricane Harvey, the weather service reports.

Editor’s Note: This story has been updated with new information about the damaged I-10 bridge. 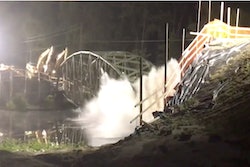 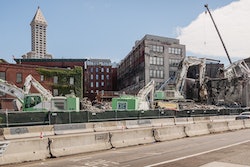 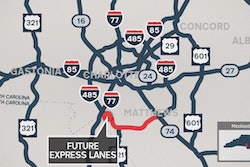