When the Bayonne Bridge between New Jersey and New York was completed in 1931, it was considered an engineering feat – becoming the world’s largest steel arch bridge. Now, the bridge is nearing the end of a new engineering feat – raising its height by building a new, higher deck between its historic arches.

The Ports Authority of New York & New Jersey tells the Staten Island Advance that the $1.7 billion bridge project over the Kill Van Kull will be completed by the end of first quarter 2019.

The construction contract was awarded in 2013 to a joint venture of Skanska Koch and Kiewit Infrastructure for the “Raise the Roadway” project, which was required so larger container ships could pass underneath on their way to and from port terminals in New Jersey and Staten Island. The project involved building a new deck 64 feet above the existing roadway, while vehicle traffic still flowed underneath. In 2017, the new elevated roadway opened to traffic, at 215 feet above the water, but only one lane in each direction. Work continues on widening the road to two lanes in each direction. The lower deck was removed.

Along with raising the roadway, the authority says it is upgrading the bridge to modern standards, with wider lanes, new shoulders, a median safety divider. It will have a bike and pedestrian path. The bridge also has new piers and new approach roads.

After opening the new lanes in 2017, the authority began cashless tolling for drivers on the span, with no toll booths. Antenna equipment read E-ZPasses and camera equipment reads license tags of non-E-ZPass vehicles and a bill is sent to the owner.

As for the Bayonne Bridge’s steel arch, it is no longer the longest such span in the world. Its 1,675-foot central span was surpassed 45 years after its completion by the New River Gorge Bridge in West Virginia, but it is the fourth-largest steel arch bridge in the world.

Watch a time-lapse video of the “Raise the Roadway” project: 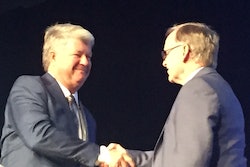 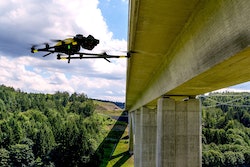 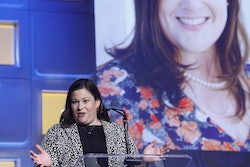