The Rhode Island Department of Transportation (RIDOT) began dismantling the 62-year-old Sakonnet River Bridge on Thursday morning, April 11, the Providence Journal reports. The support beams on either side of the large central arch segment of the bridge were cut, and the bridge section was slowly lowered onto waiting barges.

Four metal columns capable of holding 450 tons each were erected under the central bridge section by Burkhalter Rigging. Those columns held the bridge section in place while it was cut from the rest of the bridge. Each of the columns was made of large metal boxes piled on top of each other, from the barge up to the bridge.

At the bottom of each column was a jackup system, a set of four computer-connected lifts that allowed crews to grab the next-to-the-bottom box in each column and hold it while crews pulled the bottom box out of the pile. Then, the four lifts would ease the columns down the barge deck in unison, grab the next box, and repeat the process.

The bridge, which was built in 1956, carried Route 24 over the Sakonnet River between Tiverton and Portsmouth until the new one was built alongside it in 2012. RIDOT spokesman Charles St. Martin told the news agency that the metal removal should be done by sometime this summer, but removal of the concrete supports would not be completed until 2020.

The WPRI YouTube video below shows the arched center section of the Sakonnet River Bridge being lowered to barges. 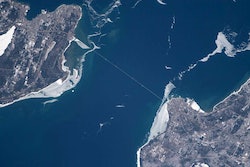 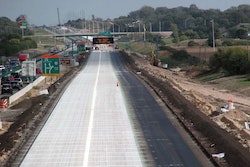 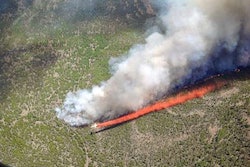