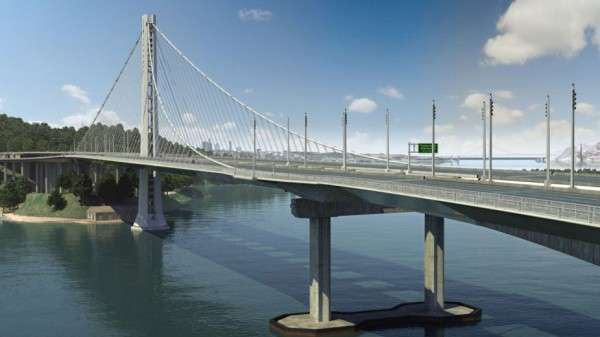 Despite an announcement earlier this summer that the East Span of San Francisco-Oakland Bay Bridge would not open as scheduled on Labor Day, the $6.4 billion span began carrying drivers late Monday night, according to a report from The Sacramento Bee.

The 2,047-foot span has been under construction for more than a decade. The project has been criticized for problems with its design, budget, timeliness and more, but it has also garnered praise for becoming the world’s largest self-anchored suspension (SAS) bridge.

Check out the video to the right to see a 4-minute time lapse of more than 42,000 hours of construction of the bridge.

CBS News reported that, following a five-day closure of the bridge, the California Highway Patrol conducted a final security check and toll takers went back to work on Monday night, while cars lined up hours before the reopening.

Cars began lining up around 5:30 p.m. at the West Grand Avenue entrance of the span, according to Mercury News. And by 8:30 p.m., 15 cars and 10 motorcycles were waiting to cross the newly-reopened bridge.

The first cars began crossing the bridge at about 10:15 p.m., CBS News reported.

Prior to the closure, the bridge had been estimated to reopen at 5 a.m. on Tuesday morning.

According to CBS San Francisco, a large public celebration — complete with more than 100,000 people, fireworks, a half marathon and a concert — had been originally planned for the reopening. However, the celebration didn’t occur (mostly due to delays and costs associated with the 11-year construction of the span), and, rather than the governor, California’s Lieutenant Governor Gavin Newsom led the private chain-cutting ceremony.

In addition to the SAS, the bridge includes upgrades such as a side-by-side configuration, wider road decks with shoulders on either side, a 15.5-foot-wide bike/pedestrian path and a new lighting system.  More details about the bridge are available at baybridgeinfo.org.

While it’s been deemed safe to use, the East Span of San Francisco-Oakland Bay Bridge still needs more work, according to The Sacramento Bee‘s report. The span is slated for completion in December.