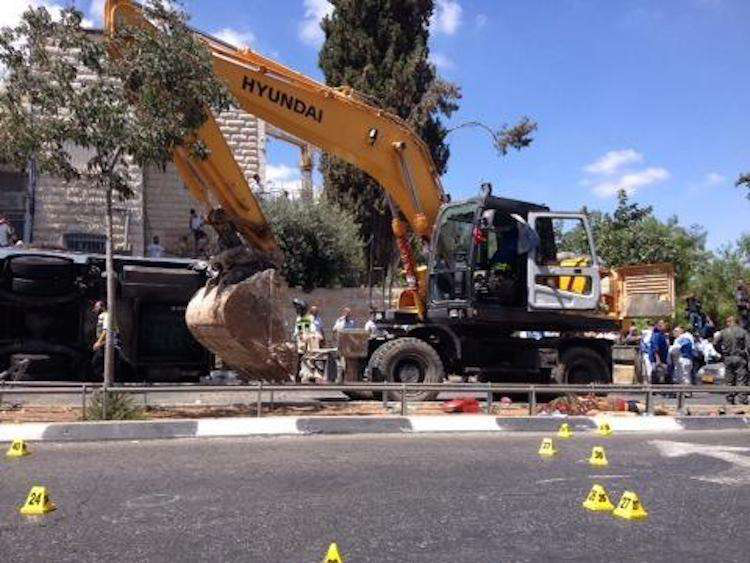 One man is dead and six others are wounded in the aftermath of a terrorist attack in Jerusalem carried out by a construction worker driving an excavator.

Police identified the driver as 30-year-old Muhammed Naif El-Ja’abis, a Palestinian man from East Jerusalem working on a building site near the “‘seam’ between the western and eastern parts of the city,” according to a report from the Times of Jerusalem. Officials say the attacker drove the excavator off of the jobsite and ran over the pedestrian before ramming a shuttle bus onto its side, injuring the driver of the bus and five others.

The attacker continued to swing the excavator’s arm at the overturned bus when a police officer ran up to the machine and fired several shots into the cab, killing the man and stopping the attack.

Police said the attack was “nationalistically motivated,” and Internal Security Minister Yitzhak Aharonovitch told Reuters that the attacker’s “whole family is being interrogated. We want to know who sent him, if he was acting alone, whether he belonged to a network—all those things are being checked.”

The Associated Press captured raw video of the aftermath at the scene which you can watch below. In addition, a person near the scene used a cell phone to capture video of the police subduing the attacker as he was ramming the bus. Due to the graphic nature of that video, we are not embedding it here but it can be seen on YouTube at this link.

This post was written by Wayne Grayson, Online Managing Editor of Equipment World.