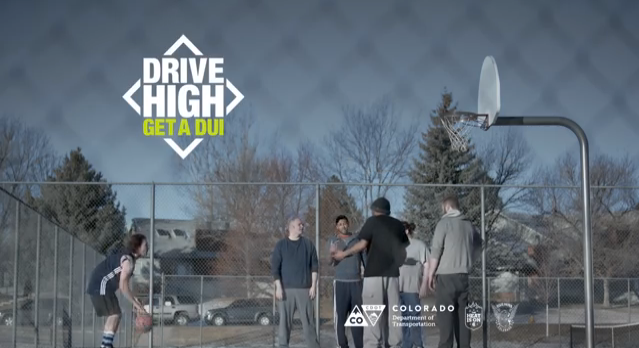 I remember the first time I smelled marijuana. It was at a concert at an outdoor venue in the fall that I went to college.

I don’t smoke, and it makes me ill when I’m around it. When I smelled a slightly sweet smell of smoke, I made the comment, “What is that smell? That is some funky smelling smoke,” as it wafted toward me as I danced on the lawn. Everyone looked at me and laughed. “That’s ‘wacky tobaccie,’” one of the people with me said.

But now, at least in Colorado, marijuana will be mainstream now that recreational use of it has been legalized.

However, the Colorado Department of Transportation (CDOT) is making it very clear – through humor – that, though smoking it might be legal, driving under the influence still is not.

“From the perspective of law enforcement, the legalization of recreational marijuana hasn’t changed the DUI law. If you drive high, you will get a DUI,” said Colonel Scott Hernandez, chief of the Colorado State Patrol, in a press release about the DOT’s “The Heat is On” efforts, a campaign focused on driving impaired under the influence of alcohol and other substances that can impair judgment.

“Officers are trained to detect impairment of all substances—including marijuana,” Hernandez said.

According to CDOT, there were 630 drivers involved in 472 motor vehicle fatalities on Colorado roadways in 2012. Out of the drivers involved, 286 were tested for drugs. The test results found that nearly 27 percent of drivers tested had a positive drug test, with 12 percent testing positive for cannabis, CDOT says.

The official kick-off of CDOT’s new “Drive High, Get a DUI” campaign includes a series of television commercials that will air during shows targeting males between the ages 21 to 34, who tend to have the highest number of DUIs. There will also be widespread outreach to rental car companies and dispensaries to inform tourists and marijuana users about marijuana driving laws in Colorado.

Watch the included videos for a look at these entertaining public service announcements (PSAs).