Don McLoud
Dec 19, 2022
In this November photo, workers install barriers on the new Fern Hollow Bridge, which could partially open by the end of the year. The former 50-year-old bridge in Pittsburgh collapsed January 28.
Pennsylvania Department of Transportation

Editor's Note: This story was updated December 22, 2022, for the bridge reopening's latest timeline.

Less than a year after the Fern Hollow Bridge collapsed in Pittsburgh with a bus and four passenger vehicles on it, its replacement could open by the end of December.

Pennsylvania Department of Transportation officials report that, thanks to the $1.2 trillion federal infrastructure law, funding immediately arrived to launch the rebuilding project soon after the collapse, enabling its construction to be put on a fast track.

The snow-covered bridge collapsed January 28, leading Governor Tom Wolf to issue an emergency declaration. PennDOT then began to work on the design for the new bridge, which will carry Forbes Avenue over Frick Park. The infrastructure law enabled $25.3 million in federal funds to become immediately available without affecting other projects in the state, according to Wolf. After the bridge is completed, the City of Pittsburgh, which owns the Fern Hollow Bridge, will resume responsibility for its maintenance.

HDR and Swank Construction began the design work on the new bridge in February, with construction starting in April.

The 460-foot-long bridge will remain four lanes, but its pedestrian and bike path will be 50% wider. Only two travel lanes will open first, while the contractor installs light polls and a pedestrian crossing, according to WESA 90.5 radio.

There is still some uncertainty as to the exact date of the bridge’s opening, due to weather. PennDOT officials were hoping to open it this week before Christmas. But on December 21, Wolf cut a ceremonial ribbon at the bridge site, announcing the reopening of the bridge to traffic by December 31.

“Substructure, superstructure and concrete deck placement work has been completed. Bridge deck overlay and wingwall work will occur through the spring of 2023,” according to Wolf. “Bridge barrier installation, pedestrian railing and line painting are anticipated to be finished by late December to allow the bridge to open to a single-lane of bi-directional traffic while work continues into early 2023.”

The cause of the bridge’s collapse remains under investigation by the National Transportation Safety Board. A preliminary NTSB report said the collapse occurred due to a structural failure on the bridge’s west end, but it has not yet determined the cause.

The 50-year-old bridge had been rated as being in poor condition since 2011. It had a weight limit of 26 tons and was traveled by about 14,000 vehicles a day.

The new bridge’s design will have three spans consisting of “continuous composite prestressed concrete I-beam,” according to PennDOT. 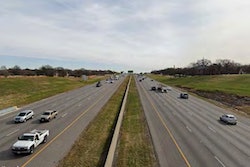 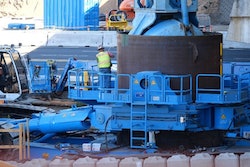