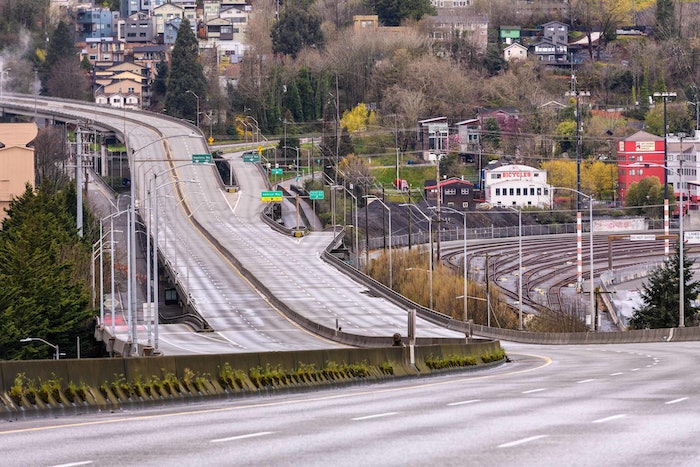 A view of the West Seattle Bridge, which has been closed for over a year after cracks were found to be growing on its concrete girders.
Seattle Department of Transportation

The final phase of repairs to the Seattle's busiest bridge – closed for over a year after rapidly growing cracks were found – is set to begin this year.

The Seattle Department of Transportation has chosen Kraemer North America for the estimated $48 million West Seattle Bridge project, which is expected to be completed in mid-2022.

After the expanding cracks were found on concrete girders under the concrete deck, Kraemer was selected to perform emergency repairs. Completed last year, that work has stopped the cracks from growing, according to SDOT. Those repairs involved installing 10 miles of taut steel cable inside the bridge and wrapping the structure in carbon fiber in multiple areas, SDOT says.

A diagram of the stabilization work done in 2020 for the West Seattle Bridge.Seattle Department of TransportationKraemer's first task will be to develop a "pre-construction scope of work so they can immediately participate in progressing the rehabilitation design," the agency says.

Kraemer will serve as a general contractor and general manager on the project, which means it will be involved earlier in the design process. SDOT says this will help with controlling costs and scheduling, as well as allow for creative construction ideas.

"Close collaboration between SDOT and Kraemer will help identify ways to stay on schedule and find innovative solutions," the agency says. "We are also working to make smart use of the contractor team while the bridge is out of service, which may include additional work like replacing bridge expansion joints or repairing pavement."

The contract calls for repairing both the West Seattle High-Rise Bridge and the lower Spokane Street Swing Bridge. The 46-year-old high-rise bridge is between Interstate 5 and Fauntleroy Way SW and crosses Harbor Island. The lower two-lane bridge is open only to emergency vehicles, city buses and freight traffic, while general motorists must take a detour. Combined, both bridges handled about 100,000 vehicles a day.

After the growing cracks were found March 23, 2020, the city was faced with a choice of repairing the bridge or replacing it. At the time, the repair estimate was about $48 million, and the replacement costs ranged from $383 million to $565 million with an estimated completion date of 2026.

Mayor Jenny Durkan, who called for the bridge's emergency closure, chose the repair option for its lower cost and quicker completion date. The repair is considered to be a temporary fix, adding 15 to 40 years of life to the structure. At some point, replacement would still be required.

In all, the city has estimated the entire project will cost $175 million, which includes the earlier stabilization repairs.

“The past year has been full of once-in-a-lifetime challenges for our residents and businesses," Durkan said in announcing Kraemer as contractor. "We’re midway through this complex project, and the end can’t come soon enough for everyone who’s been stretched by the emergency closure. Our new and growing construction team will work urgently to safely reopen the bridge.”

A diagram of the final phase of repairs and rehabilitation for the West Seattle Bridge.Seattle Department of TransportationThe final phase of the project involves installing additional post-tensioning tendons and internal and external carbon fiber reinforced polymer, which will allow the bridge to be reopened, SDOT says. The project will also involve jet grout of the soil around one of the piers to improve the bridge's ability to withstand earthquakes.

The lower bridge will get sheets of carbon fiber reinforced polymer installed on the inside and outside faces of the box girder.