The contractor group constructing the I-4 Ultimate Project in Florida faces $188,913 in proposed penalties after a worker died and two others were injured in separate struck-by incidents on the largest road construction project in the state’s history.

The U.S. Occupational Safety and Health Administration has cited SGL Constructors, a joint venture of Skanska, Granite and Lane construction companies that are rebuilding the 21-mile interstate expressway through Orlando.

OSHA also cited Atlanta-based contractor Martin-Pinero CPM LLC after an employee fell and died while working on the I-285/400 Interchange flyover bridge ramp in Atlanta. The company faces $170,020 in proposed penalties. 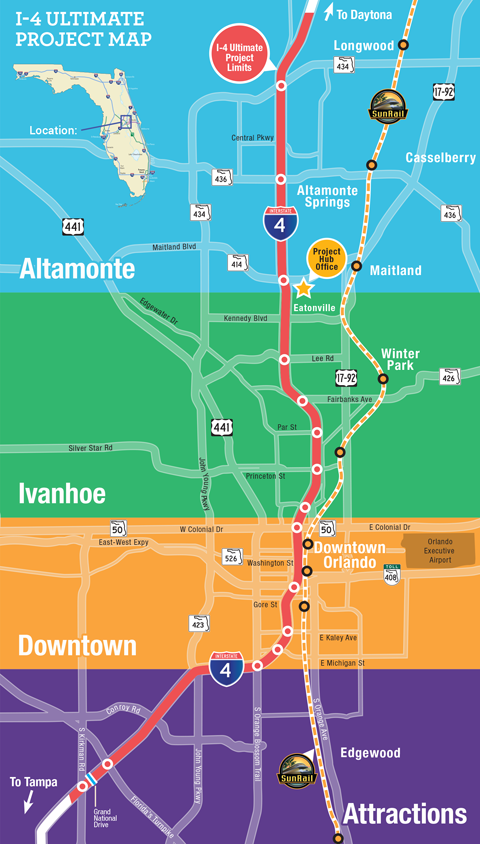 OSHA cited SGL for two separate incidents on the $2.3 billion I-4 Ultimate Project in Florida.

On September 28, a concrete beam fell and struck an aerial work platform that held two workers. One of the workers, Ulises Corrales-Ibarra, 37, died, and the other worker was hospitalized with non-life-threatening injuries.

SGL was cited for “exposing employees to struck-by hazards, failing to provide adequate training and allowing employees to walk under a load while a crane was moving,” according to OSHA. The proposed penalties are $53,976.

SGL was also cited for a September 13 incident on the I-4 project in which a subcontractor worker was hospitalized with a leg injury after being struck by a 7,000-pound metal pipe after it rolled off its stack. OSHA said the pipes had been stacked “in an unsecure manner on an uneven slope.” SGL faces $134,937 in proposed penalties.

OSHA also cited Universal Engineering Services for exposing employees to struck-by hazards and issued proposed penalties of $12,145 to the company.

“These employers failed to take appropriate action and provide the necessary protections to employees while they worked on this highway improvement project,” said OSHA Regional Administrator Kurt Petermeyer.

An email April 9 to Skanska from Equipment World seeking comment about the penalties has not been answered.

Corrales-Ibarra’s death marks the fifth fatality on the I-4 project since it began in 2015. According to WFTV9, the following other deaths have occurred:

On October 3, Dustin Maxwell was attempting to install permanent metal decking on the I-285/400 Interchange flyover bridge ramp in Atlanta when he fell.

OSHA cited Martin-Pinero with “failing to secure metal decking before allowing workers to use it as a walking surface, provide fall protection training and conduct regular jobsite inspections to ensure the use of all applicable safety measures.”

An email April 13 to Martin-Pinero from Equipment World seeking comment about the penalties has not been answered.

“Allowing employees to work at heights without using proper fall protection methods increases the risk of serious or fatal injuries,” said OSHA Atlanta-West Area Office Director Jeffery Stawowy. “Employers have an obligation to ensure the working conditions they ask employees to operate under are free of recognized hazards.”

OSHA is also investigating another fall death on the I-285 project. On February 14, 2020, Leoniso Sandoval, 49, died after a fall while working for North Perimeter Contractors LLC of Atlanta.