In western Iowa, workers with Manatts placed a 6-inch unbonded concrete overlay on nearly 11 miles of existing asphalt on a Guthrie County highway. That $3.9 million overlay in 2016 is among a rising number of concrete overlay projects used to construct, rehabilitate and extend the life of road pavements.

In 2018, 42 percent of Manatts’ projects involved concrete overlays, according to Tim Tometich, project manager for the diversified heavy highway construction firm based in Brooklyn, Iowa.

“I’d say we have almost as many overlays as we do full-depth paving jobs, so it’s pretty split,” Tometich says. “It seems like more counties and states are getting on board, using overlays a lot more, especially to cover up the asphalt. It seems like it’s a longer lifecycle for these roads if you can use concrete overlays.”

Thin concrete overlays – defined as less than 6 inches thick – can extend performance life up to 20 years on existing concrete, asphalt or composite pavements, says Harrington, who has managed technical support and training programs for the CP Center.

Statistics from state bid lettings show concrete overlays have increased steadily over the past dozen years, according to ACPA. From 2012 through 2017, concrete overlays accounted for 12.5 percent, on average, of the overall yearly concrete pavement volume nationwide.

That pace is expected to hold and may even climb slightly once 2018 data are in, says Gerald Voigt, ACPA president and CEO.

The increasing use of overlays for pavement resurfacing is fueling the biggest improvement in the concrete market in at least five years, Voigt says, with volume of mainline concrete pavement generated projected to reach about 55 million square yards in 2018.

Over the past 12 years, use of concrete overlays has risen from about 4 percent of the volume of concrete pavement done in the country to about 13 percent, on average, Voigt says.

“It’s become a pretty good segment of our work, and it’s been an opportunity for us to take some market share from asphalt because the concrete overlays that we’re placing are being built on top of existing asphalt pavements,” Voigt says.

“For our industry, that’s a market enhancement; whereas, in the past, there would have been only one answer on those asphalt pavements – and that would be another asphalt overlay.”

Voigt also notes: “We’re seeing more designs that are 6 inches or less in thickness and, correspondingly, with the trend towards thinner sections is also shorter joint spacing. And contractors are using 6-by-6-foot squares for joints on concrete overlays, placing more joints in the pavement.

“We’ve seen numbers of those placed on interstate routes, and that’s important for our industry because that’s a lot thinner than people have done concrete before for high-volume interstate-type traffic,” he adds. “With the overlay technology and the inclusion of fibers, as well, in some of the sections that we’re doing, we’re able to pull down the thickness and shorten the joint spacing.”

New developments include 1.5- to 2.25-inch-long macro-synthetic structural fibers that strengthen the concrete.

A technical overview on using fiber-reinforced concrete for pavement overlays is set for release in early 2019. It’s funded by the National Concrete Consortium, composed of engineers from 32 state highway agencies, Harrington says.

And then there are the nonwoven polypropylene fabrics used as interlayers to separate an unbonded concrete overlay from the existing concrete pavement surface.

With these, the nonwoven fabric is all married together, with no patterns. The existing concrete pavement becomes a base layer, blocking cracks in the concrete below from being reflected up into the concrete overlay. The biggest use for it now is unbonded overlay, mostly over concrete but also over asphalt.

Adequate drainage of either the geotextile or asphalt interlayer is important. The fabric can act as a drain to wick away moisture.

“Now, it could be also 1 inch of asphalt used as a separation layer,” Harrington notes. “But there are two problems with that. One is, the interlayer is about twice as expensive with asphalt as it is with fabric. Two, it takes a different kind of a contract or an asphalt contractor to come out and put it down, versus a concrete contractor who’s doing the paving.”

More options to meet your priorities

“DOTs were asking for options to bid either concrete or asphalt overlays,” Harrington says. “They want the options mainly so there’s not a monopoly on one or the other because the prices can rise.”

And with those thinner overlays, he adds, engineers can avoid having to raise the grade and redo the shoulders, maybe guard rails, and reworking around bridge entries.

“Training is also important,” Harrington points out, “because they need to develop their own in-house expertise so they can train their people.”

For contractors, priorities include training for installations and the way they construct projects, as well as having adequate vertical clearance and traffic maintenance during construction, says Harrington, who has developed countless technical briefs, guides, workshops and webinars on concrete overlays and preservation.

He and Fick, who is a project manager for The Transtech Group, have trained thousands of contractors and engineers in about 30 different states since 2008.

In addition, a document under development, titled “Development of Concrete Overlay Construction Documents.” could help contractors get uniformity in plans so they know how to best bid overlay projects.

“Most states bid concrete in square yards, and asphalt in tonnage,” Harrington explains. “With concrete overlays, we’ve been encouraging highway agencies to allow contractors to bid two items for concrete overlays: one for placement, or square yards, which is typical – but then another one for cubic yards, for the material they use.

“The reason we do that is that when you put an overlay on top of a roadway, it changes in thickness because the roadway underneath is not necessarily uniform.”

Harrington says some states bid only by square yards, so a contractor must guess if it will be thicker in certain areas and adjust the price accordingly to try to cover that volume.

“We’ve been encouraging the states to bid it both by placement of square yards and by material in cubic yards,” Harrington says. “We bid it for the materials he’s actually placed, with one bid item for placement, to put it down, and the other for materials he uses because of the variance in thickness. That’s a big deal for contractors.”

Manatts’ Tometich tells of an Ida County overlay project in which contractors could bid either in asphalt or concrete, with two separate bids. His company didn’t bid, but he noted that “it was a comparable bid as far as life cycle – and concrete was the low bid.”

His crews lay overlays typically 4 to 6 inches thick, though lately they’ve constructed several that are 7 or 8 inches. “They all range in different thicknesses, different sub-bases or substructures,” he says.

Manatts uses Wirtgen milling machines and GOMACO slipform pavers, mostly GHP-2800 four-track machines for mainline paving and a GP-2400 for some of the side roads, shoulder work and smaller pavement. They use Leica Geosystems on stringless systems and Wirtgen mills.

“Typically, we will stringless mill and stringless pave all of our projects,” Tometich says. “So if it is a profile mill-type of project, we don’t set a stringline; we create a 3D model. Using digital surveys, we topo (image the topography of) the existing surface to see what’s there and come up with a new profile,” he says.

“We’ll mill to that profile using total stations and the 3D model, and then we’ll pave to the same profile, obviously at a different elevation for the new pavement. We do that quite a bit. It depends on what the engineer specifies and what kind of existing pavement is on the road.”

Sometimes the existing pavement is thick enough there that they can use the structure for the overlay, with overlays anywhere from 4.5 to 8 inches thick.

Across the nation, projects to construct concrete overlays are being let, including in states that haven’t done this before, such as Kentucky and West Virginia, says Voigt. Big projects have also been recently completed in North Carolina, Minnesota, Iowa, Kansas and California, he says.

Using concrete overlays enables owner agencies to take maximum advantage of existing assets. “The pavement they already have out there becomes the structure for supporting the overlay, providing excellent value,” he says.

Voigt also notes a key benefit: concrete overlay does not deform or rut the way asphalt can.

“From a user impact standpoint, you’re getting 20-plus years out of a concrete overlay versus an asphalt overlay getting eight, nine, maybe 10 years.”

Traffic maintenance and placing overlays safely are other areas where training is needed, according to Harrington. Clearances, including for safety barriers, are critical, too.

Other benefits of concrete overlays are not as tangible, yet just as important.

ACPA has released a new guideline specification for use when geotextile material is used as a bond breaker, for drainage and a separation interlayer for concrete pavements in new construction and unbonded overlays. https://bit.ly/2D4xsAF

Also, three other manuals that cover different aspects of concrete practices are now available from the National CP Tech Center, including Nonwoven Geotextile Materials Used as the Separation Layer for Unbonded Concrete Overlays. Go to: https://bit.ly/NCPTC 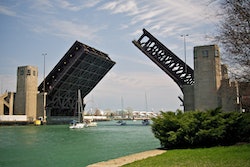 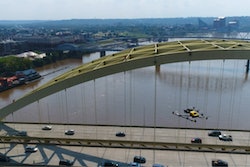