The Senate has confirmed Elaine Chao as the next Secretary of Transportation in a 93-6 vote Jan. 31. She was sworn in the same day. 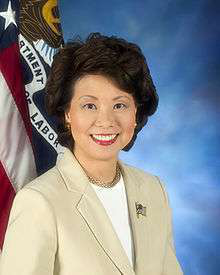 “It is an honor to rejoin the extraordinary people of the U.S. Department of Transportation, and begin working with them to rebuild, refurbish and revitalize America’s infrastructure,” Chao says. “My goal has always been to help others access opportunity and build better lives for themselves and their families by supporting policies that foster job creation and workforce competitiveness. At this crucial time, the Department of Transportation can make a tremendous difference for our country.”

During her nomination hearing before the Senate Committee on Commerce, Science and Transportation, Chao emphasized the need for sustained funding for transportation projects, with the potential for using public-private partnerships as an ingredient in a mix of financial methodologies.

“I congratulate Elaine Chao on her confirmation as the next Secretary of the United States Department of Transportation,” says Transportation and Infrastructure Committee Chairman Bill Shuster (R-Pennsylvania).  I look forward to getting to work with her, the new administration, and my colleagues in Congress on the many issues before the Committee this year, including critical FAA reforms and smart, responsible investments in our Nation’s infrastructure network.  We have a tremendous opportunity to improve our transportation systems, reduce regulatory burdens, encourage innovation and private-public partnerships, strengthen our competitiveness, and build a 21st century infrastructure for America.”