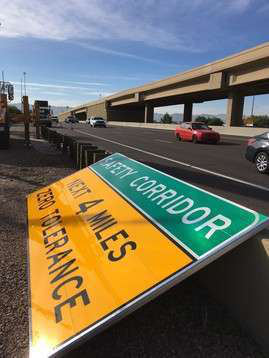 The Arizona Department of Transportation (ADOT) has started adding signage to highways in the state indicating those that are designated as Safety Corridors—roadway sections that have more crashes, injuries and death than normally expected.

Along with ADOT, the Arizona Department of Public Safety and the Governor’s Office of Highway Safety are implementing four Safety Corridors across the state over the next two months. The signs will signal to motorists they are entering and exiting the corridor and indicate that there is “zero tolerance for violations.”

Officials selected the corridors after analyzing crash data related to driver behavior and law enforcement input. After a pilot period of at least one year, the agencies will review the impact of the designations to determine if they will continue or expand the program.

“These segments were selected because they have higher-than-average instances of speeding, aggressive driving, impaired driving and lack of seat belt use,” says Brent Cain, director of ADOT’s Transportation Systems Management and Operations Division. “Those are the leading factors in traffic deaths, and decreasing their occurrence makes the roads safer for everyone.”

The Safety Corridor program is launching in two phases and each phase includes an urban and rural segment. The first phase began this week and will be completed by Dec. 20. The second phase will be completed in January.