For the first time in a decade the United States has long-term transportation funding as both the House of Representatives and Senate voted overwhelmingly Thursday to pass the five-year, $305 billion FAST Act.

“Under the Act funding will go up by roughly 11 percent over five years. This is a down-payment for building a 21st century transportation system, though it is still far short of the amount needed to reduce congestion on our roads and meet the increasing demands on our transportation systems,” U.S. Transportaiton Secretary Anthony Foxx said Friday in a blog post.

The bill cleared the House with a vote of 359-65 hours before the Senate passed it by a vote of 83-16. The bill clearned both chambers one day before the funding deadline for highway projects wold have expired.

The bill will spend $305 billion on roads and bridges over the next five years, with funding from the gas tax and $70 billion in offsets to the federal budget.

“The FAST Act is one of the most important measures this Congress will pass,” Shuster said. “This legislation will help repair and improve the critical transportation network that we all rely on every day to get to work, get our kids home safely from school, and get the goods and products we need.

“This bill is an investment in America and the infrastructure that underpins our economy. I appreciate the work of all my colleagues on the Transportation Committee and the Conference Committee, on both sides of the aisle, in working to move this legislation forward for our country.”

Shuster’s fellow committee member from across the aisle, Peter DeFazio (D-Oregon), said the bill isn’t perfect, but it does provide more annual funding for roads and bridges than the original House bill. He also praised Shuster and the lawmakers he worked with in the conference committee.

“After ten years of short-term band-aids and extensions, Congress will finally pass a long-term, bipartisan surface transportation bill that will begin to deal with our aging network of roads, bridges, and transit systems.” DeFazio said. “This is a common-sense, bipartisan bill that provides our state and local governments with the certainty they need to begin to plan for long-term projects that bring our aging system into the 21st century.”

The bill easily passed with bipartisan support, but of the 65 dissenters, all were Republicans.

“After 36 extensions, hundreds of Congressional meetings, two bus tours, visits to 43 states, and so much uncertainty, it has been a long and bumpy ride to a long-term transportation bill,” Foxx said. “It’s not perfect, and there is still more left to do, but it reflects a bipartisan compromise I always knew was possible.”

Both chambers passed their own long-term transportation funding bills this year. The House passed the six-year, $325 billion Surface Transportation Reauthorization and Reform Act Nov. 5 with overwhelming bipartisan support. The Senate passed its long-term transportation bill called the DRIVE Act in June, but the House didn’t act on it because of certain concerns regarding funding—the bill had funding for three years, but made commitments for six. The conference committee of members of the House and Senate met over the last week in order to hammer out the unified FAST Act.

You can read the summary of the bill here. 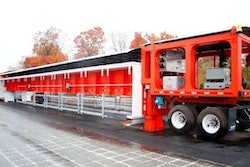