The Washington Department of Labor & Industries (WL&I) has fined four contractors for safety hazards on an SR 410 overpass collapse in Bonney Lake in April that killed a couple and their 8-month-old son.

The companies, which have 15 business days to appeal the fines, include:

A large chunk of concrete fell atop Josh and Vanessa Ellis and their son Hudson in April as they were driving beneath the overpass in a pickup truck. The chunk was a portion of a jersey barrier and part of the original overpass, built in 1992.

“Demolition is one of the most hazardous operations in construction,” Anne Soiza, assistant director for the WL&I Division of Occupational Safety & Health, said. “Preparing and following a specific safety plan that anticipates the worst-case conditions is critical. Unfortunately, that didn’t happen in this case.” 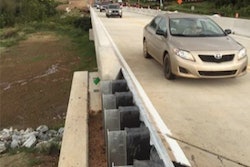