The new facility will have a large auditorium with state-of-the-art projection equipment, a dining facility that will be able to accommodate more the 100 people, and separate class rooms for specific courses in the Roadtec training curriculum, the company says.

Roadtec, which holds customer trainings each winter, says that because of  the company¹s growth, it had to hold its courses off-site during the 2009-2010 training season because of a lack of space in the existing Roadtec building.

The new complex is scheduled to be completed in late fall of this year in time for the next round of customer training sessions, according to Roadtec. 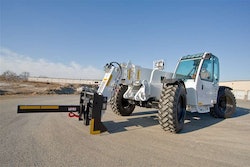