In an attempt to “refocus” on its strengths in the industrial product space, specifically compact construction, landscaping and utility equipment, New Holland will shed its North American offering of full-sized construction machines starting in 2012.

“New Holland Construction’s heritage in North America is a great source of pride,” says Jim Hasler, vice president of CNH Construction, North America, “and we are pleased with the success of our compact line.

“We are committed to providing our New Holland Construction customers with the superior equipment performance they expect.”

Given CNH’s presence in the market with the Case brand, the pulling back of the New Holland Construction offering in North America may just reflect the reality that the recent recessionary times for the industry are not turning around as quickly as hoped for.

That CNH can serve the general construction markets with a full line of Case equipment without the partial competition of New Holland moving forward would seem to have a market cleansing effect. As it has been, New Holland has made inroads with some full-sized equipment offerings in specific geographical areas of North America, but on the whole has not offered the breadth of product and services across the board to compete as a full-line market player. Caterpillar, it has not been.

Let there be no confusion, however: This is a significant announcement that will affect a good number of construction equipment customers and dealers who have come to rely on New Holland excavators, dozers, large loaders and even the occasional motor grader.

For many years, I resided in a rural community that was immediately served by one construction equipment dealer – a New Holland Construction dealer.

To suggest contractors and dealer personnel in this community won’t have to at least change gears moving forward would both be a slight and a true disservice to them.

More on the Fly Ash Debate

A byproduct of burning coal to produce electricity is worth more than $5 billion year to the road, runway and bridge industries, according to a new study.

The American Road and Transportation Builders Association says the cost of building those structures would increase by an estimated $104.6 billion over the next 20 years if coal fly ash is no longer available as a building material. Alison Premo Black, ARTBA’s senior economist and the report’s author, says that without fly ash, construction would cost $2.53 billion more a year because of the price of alternative materials and another $2.73 billion annually in pavement and bridge repair work due to the shorter pavement and service life of other Portland cement blends.

Fly ash is widely used as a supplementary cementitious material in the production of concrete, and is, says ARTBA, the “mixture of choice for many state and local transportation departments and transportation engineers because of its performance and cost-saving benefits.”

So why stop using it? Fly ash may be the subject of new environmental disposal regulations that would ban its use in this sort of construction.

The ARTBA study was commissioned by Headwaters Resources, the largest manager of coal ash in the U.S. Headwaters’ president Bill Gehrmann says that, “without coal ash, concrete will become more expensive and the environmental footprint of the transportation sector will only increase. There is,” he says, “nothing green or sustainable in such a scenario.”

A World of (commuter) Hurt

A new IBM survey of the daily commute in a cross-section of some of the most economically important international cities reveals a startling dichotomy, says the company: While the commute itself has become a lot more bearable over the past year, drivers’ complaints are going through the roof. 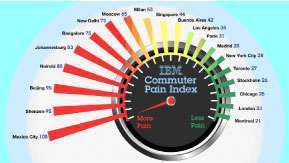 The annual global IBM Commuter Pain Survey reveals that, in a number of cities, more people are taking public transportation rather than driving, when compared with last year’s survey. In many cities, says the company, there were big jumps in the percentage of respondents who said that roadway traffic has improved either “somewhat” or “substantially” in the past three years. The survey results suggest that aggressive infrastructure investment in some of the most rapidly growing economies seems to be paying off, says IBM.

The Index ranks the emotional and economic toll of commuting in 20 international cities. Of those cities, Montreal provided the least stressful commute, Mexico City the most painful. In many cities, the survey recorded significant increases, when compared with last year, in the number of respondents who said that roadway traffic has increased their levels of personal stress and anger and negatively affected their performance at work or school.

“Commuting doesn’t occur in a vacuum,” said Naveen Lamba, IBM’s global intelligent transportation expert. “A person’s emotional response to the daily commute is colored by many factors – pertaining both to traffic congestion as well as to other, unrelated, issues. This year’s Global Commuter Pain survey indicates that drivers in cities around the world are much more unsettled and anxious compared with 2010.”

It was 80 years ago this month that Better Roads was published for the first time. That’s some achievement whichever way you look at it. When I sat down to write a column about this anniversary at the beginning of the year, I remember thinking that this is such a long period of time that fortune, chance, luck, call it what you might, cannot explain it. Think of the eras, the bad times, the changes that dramatically re-shaped the highway and bridge industries over those years. This magazine has been valued by a lot of people with a very wide range of needs and wants, for a very long time.

I wrote some new words to go here, but I’ve gone back and reprised a section from that column because I think those words were better: Longevity alone can be misleading. Survival is not always evidence of excellence. But as I look into the old pages, I think I see why there is an 80-year history. What I want, and it seems to me what my predecessors sought, was to edit a magazine that was always anticipated and valued highly by its readers. That is how we reached this anniversary. And that’s how we’ll reach the next ones.

We are like so many of the people who live and breathe this industry – intensely passionate about it. That may be the single biggest factor in our 80-year success story. You can see our first 75-year retrospective on the betterroads.com website. I recommend it. These old stories will bring you back in touch with much of the history of our industry as it was made. v

Lorie Tudor was hired by the Arkansas Highway and Transportation Department in 1981 as a clerk typist. Today, she is the department’s assistant chief engineer of planning, and apparently the highest-ranking female engineer ever in the agency.

According to an Arkansas News story by Rob Moritz, she managed only two years at a tech college before leaving for the full-time clerk typist job at the department. Rising as far as she could without a college degree, she left and with family support took on a civil engineering degree at the University of Memphis.

The rest, as they say, if pure feel-good history. For the full story, go to arkansasnews.com and type her name into the site’s search box. v 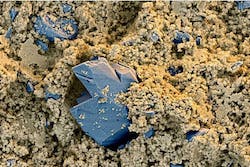 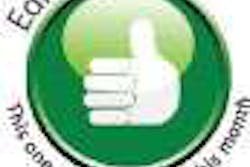