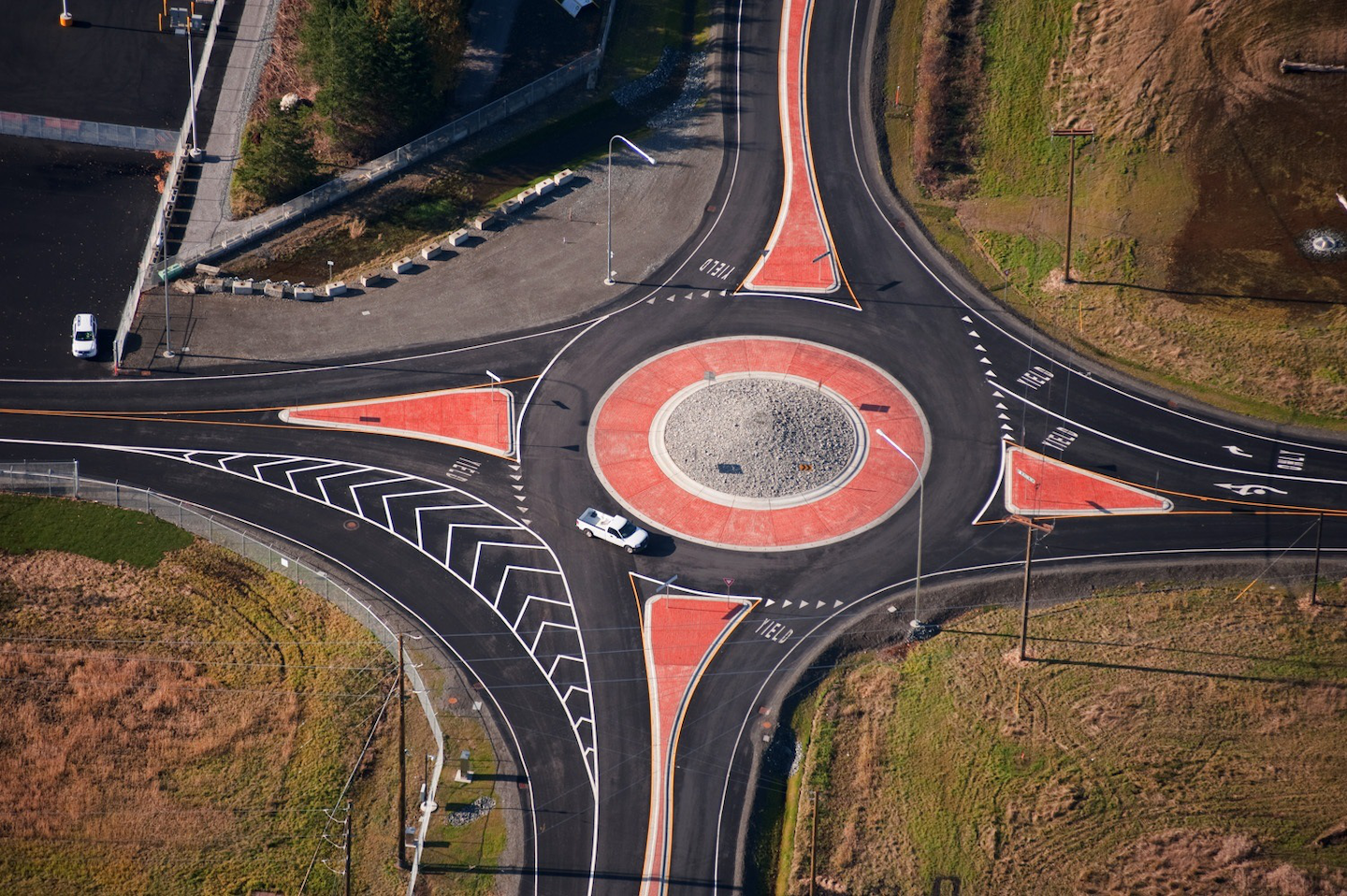 Roundabout design was once a task that drove engineers around the bend. Accounting for so many variables in the early stages of design was difficult to manage. If one changes an approach leg angle, how does that impact design? When you know the capacity requirements, how does that impact the size of the center radius? Before engineers make any decisions, they always ask themselves: when do you choose a roundabout over a traditional intersection?

The Federal Highway Administration (FHWA) notes that “intersections are planned points of conflict in any roadway system. This includes U.S. and state highways, county roads and local streets.  Motorized and non-motorized users are crossing paths as they travel through or turn from one route to another. Therefore, it is not surprising that a major part of addressing road safety challenges involves intersections…. Intersections can also become very congested when traffic volumes are high, creating inefficiencies that result in user delay and frustration.”

A primary goal of intersection design is to limit the severity of potential conflicts among road users. Intersection channelization, a geometric design concept used to reduce conflicts, employs such techniques as raised medians or traffic islands to discourage wrong-way turns or other undesirable movements. Channelization also uses techniques such as pavement markings to delineate desirable vehicle paths.

Assuring the safe and efficient operation of intersections is becoming an increasingly important issue as agencies attempt to maximize vehicle roadway capacity to serve the growing demand for travel. Enhancing safety and reducing crashes are key objectives whenever the design or operational characteristics of an at-grade intersection are modified. Space availability, traffic volumes and patterns, right of way issues and environmental concerns like wetlands or biologically sensitive areas must all be considered.

“The idea is to give motorists the information they need at the time they need it,” Fred Ranck, a safety design engineer at the FHWA Resource Center, told FHWA’s Public Roads (Jan/Feb 2005, Vol. 68 · No. 4). “Intersections are complex meetings of roads, so it is crucial for the driver to get the right information as to what lane to be in and where to go.” There are dozens of factors that go into building an intersection and this article examines only a few of them. Road design engineers have to incorporate local conditions and accepted practices into the decisions they make. In recent years, many have used CAD-based computer turning template programs to help them calculate the vehicle swept paths. These programs are often the catalyst that helps engineers with their roundabout and intersection design. One of these programs is AutoTURN.

The Nebraska Department of Roads (NDOR) developed a Roadway Design Manual in April of 2012 in which they discuss the different types of intersections. Unchannelized intersections are the most common type, consisting of the crossing of two roadways at the same elevation connected by radius returns to accommodate the wheel paths of turning vehicles. Typical characteristics of unchannelized intersections are low turning movements and low overall traffic volumes.

Channelized intersections separate conflicting traffic movements into definite paths of travel by the use of pavement markings and/or curbs. A primary purpose of channelization is to provide reference points to enable a driver to predict the path of intersecting vehicles. Channelization also serves to segregate, store, and protect turning and crossing vehicles. (Source: NDOR, Roadway Design Manual, Page 4-2, April 2012)

The third type of intersection discussed in the NDOR report (Page 4-3, April 2012) is the roundabout. Roundabouts are circular intersections in which the traffic flows around a central island. Entry and exit to/from a roundabout is accomplished through a low speed right turn, yielding to the traffic already in the roundabout, which substantially reduces the number, type, and severity of traffic accidents in the intersection.

In addition to AutoTURN, some road design engineers have used TORUS to assist in the design of roundabouts. This software program takes the innovative approach of generating roundabout geometries using vehicle swept path movements.

If a roundabout is the designer’s choice, there are still several important decisions ahead. Roundabout shape is one of the most important decisions a designer makes, because the shape often determines design elements that affect safety performance and operation of the roundabout. The desirable shape of a roundabout is circular. But sometimes a circular shape is not feasible because of specific needs or constraints; in which case, consider a noncircular shape. Sometimes a circular shape can still be used by slightly offsetting the roundabout. (Source: Wisconsin DOT, Chapter 1320, Roundabout Guide, July 2013.)

An oval or elliptical roundabout is a good choice when constraints such as right-of-way existing roadway alignments, buildings and/or wetlands influence the shape. The designer should experiment with different roundabout sizes and radii and use the design vehicle turning software such as AutoTURN to refine the oval shape to find the best operation while retaining lower speeds.

Road design engineers have traditionally used manual calculations combined with in-the-field experience when designing at-grade intersections. The introduction of intersection software like NEXUS is relatively recent and allows engineers to incorporate all the key elements in the intersection design process including design vehicles, capacity conditions, sight lines, conflict points, and conceptual grading.  With accepted guidelines like AASHTO and FWHA built in, today’s road

A typical four-legged intersection has about 32 different types of conflicts, where vehicles could collide. The essence of the intersection control is to resolve these conflicts at the intersection for the safe and efficient movement of both vehicular traffic and pedestrians. NEXUS was developed to give engineers the ability to quickly and efficiently create intersection layouts with pre-generated templates and sophisticated editing tools that continually update the intersection as design changes are made.

Changes such as adding a left turn lane or increasing the storage length of an auxiliary lane will update all of the intersection geometry allowing designers to explore different concepts or immediately react to a large number of design criteria.

According to the Florida Intersection Design Guide (2013), traffic signals provide for orderly flow through intersections by alternately assigning right-of-way to particular movements. The required engineering study to justify a traffic signal should address the relative safety and capacity impacts of installation. If a traffic signal is justified, the intersection should be designed in accordance with optimized traffic signal operations.

“It’s important for engineers to consider all the variables before choosing a roundabout or at-grade intersection for their projects,” said Steven Chan, Director of Product Management at Transoft Solutions. “Which ever options they choose, software is just part of the engineering process when it comes to designing intersections or roundabouts. Training and previous experience will guide the design decisions and software can help put all the variables into proper perspective. Accurate software gives them piece of mind.”

About the author: Chris Johns has been a writer and editor for more than 20 years. Beginning as Sports Editor for the Manitoban at the University of Manitoba in 1991, he has written more than 500 articles covering topics from World Cup Volleyball to the oil sands of Northern Canada. In 2012, he joined Transoft Solutions, where he has written about the transportation engineering industry for a variety of publications. He holds a Master’s degree in Applied Communications from Royal Roads University.