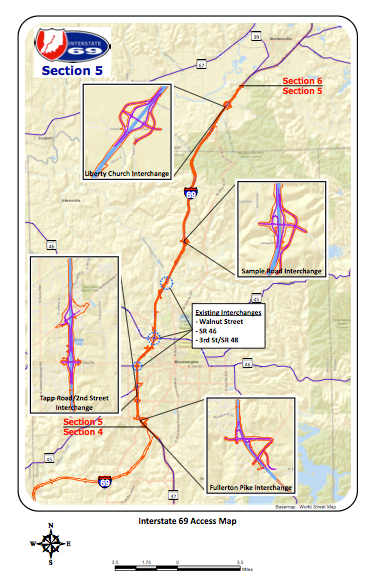 Now that the Indiana Finance Authority and Indiana Department of Transportation (INDOT) have finalized the contract with I-69 Development Partners to design, build, finance, operate and maintain the 21 new miles of I-69 Section 5.

Utility relocation will take place prior to the start of construction.

This spring and summer utility crews will begin installing new lines where existing service conflicts with the new I-69 footprint, the agency says.

INDOT says contractors completed tree cutting on March 31 within the land available so far for I-69 Section 5 in the Bloomington, Indiana, area. Now, utility relocations will continue until construction begins later this year. Crews will also continue to mulch and haul off trees that were previously cut, as well as clear underbrush, the agency says.

The project, which is being financed by private activity bonds, involves rehabilitating and upgrading 21 miles of the existing, four-lane State Road 37 to interstate standards between Bloomington and Martinsville, Indiana.

The private activity bonds that will finance the project are expected to be issued by I-69 Development Partners in late June, according to a statement issued by INDOT.

The state’s payment structure makes rising construction costs and the risk of operations and maintenance the responsibility of the private developer, and requires the developer to meet performance standards for quality, schedule and maintenance to avoid reductions in recurring payments, INDOT says.

Two payments to the private developer for Section 5 of I-69 are tied to completion of safety improvements in Bloomington, such as interchanges at Fullerton Pike and Tapp Road, and overpasses at Vernal Pike and Rockport Road.

Section 5 of the I-69 is currently slated to open by the end of 2016, which INDOT says is several years ahead of schedule.

The entire 142-mile I-69 corridor was divided into six independent sections in the Tier 1 Final Environmental Impact Statement, which was approved with a record of decision in March 2004, INDOT says.
The first three sections opened for business in November 2012 – under budget and years ahead of schedule –  and saves motorists more than 30 minutes travel time in the 67 miles between Evansville and Crane, INDOT says.

Construction is underway on all 27 miles of I-69 Section 4 between Crane and Bloomington, which is expected to open to traffic in phases during late 2014 and 2015.

To view a design and construction schedule for all active contracts, click here.

For the project history of I-69 from corridor selection to design, click here.