The incursion of warm-mix asphalt (WMA) into the nation’s bituminous pavements continues unabated. 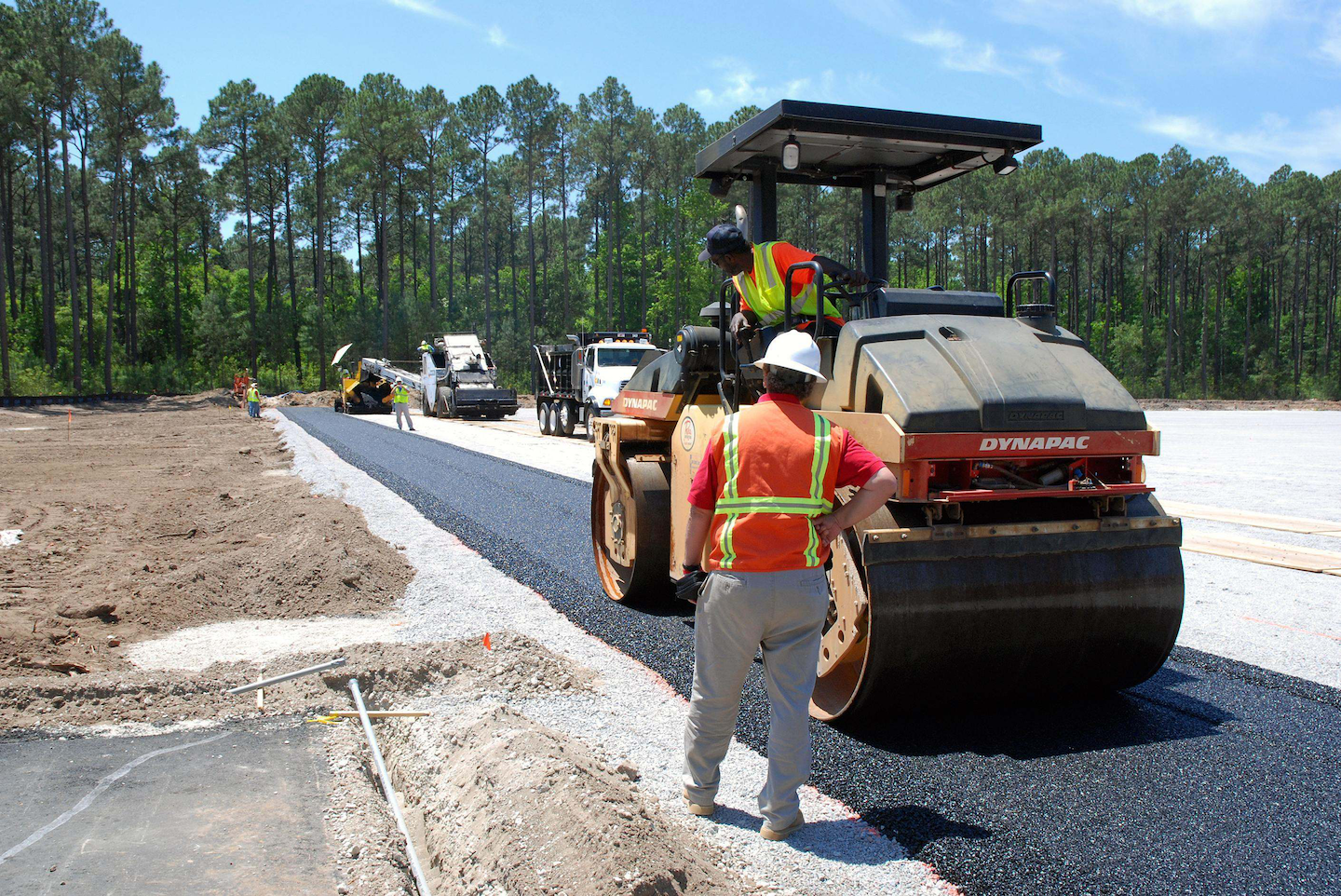 Porous asphalt pavement is similar to open-graded friction courses (OGFC), with the same problem of drain-down, but is meant for static loads and environmentally sustainable stormwater drainage. Here, mix for the parade ground at U.S. Marine Corps Recruit Depot at Parris Island, S.C., contains warm-mix additive instead of fibers.

The survey, conducted by NAPA under contract to FHWA, found a total of 86.7 million tons of WMA were produced in 2012, a 26-percent increase since 2011 and a 416-percent increase in the use of warm mix since the survey was first conducted in 2009. The full survey may be downloaded at asphaltpavement.org/recycling.

The interest in WMA is reflected by the large number of peer-reviewed technical papers on WMA presented at the 93rd annual meeting of the Transportation Research Board (TRB) meeting in Washington, D.C., in January.

The annual event was held Jan. 12-16 and kicks off the year for the surface transportation community. Nearly 12,000 transportation professionals came to Washington from around the world for the 2014 event.

The TRB Annual Meeting program covered all transportation modes, with more than 4,500 presentations in nearly 800 sessions and workshops addressing topics of interest to stakeholders in government, industry and academia.

For nearly 60 years, TRB has been held among a cluster of hotels along Connecticut Avenue near Woodley Park and the National Zoo, but in 2015 it will move to bigger digs at the Walter E. Washington, D.C., Convention Center.

Following are summaries of some of the technical papers at TRB of interest to the readers of Better Roads. For more information, visit trb.org.

Evaluation of WMA performance in Florida

Use of warm-mix asphalt is indicated for paving in cold ambient conditions or long hauls from the plant, during which the temperature of hot-mix asphalt can swiftly decline to the point that it loses workability.

Before WMA, plants would produce mixes at higher-than-optimum temps in the hopes that the mix would retain workability on arrival at the jobsite. But this excessive heat had the effect of “prematurely aging” the liquid binder in the mix by burning off the lighter hydrocarbons that give the pavement resistance to thermal cracking and other ills. Typically, those lighter fractions would be driven off by slow weathering and aging during the years.

But WMA is useful for hot climates as well, as their volatile organic compound (VOC) emissions are substantially below that of HMA mixes, enhancing working conditions and the urban environment. One by one, states are evaluating the benefits of WMA – which comes at a higher price than conventional HMA – and Florida is that latest warm-climate state to review its use.

In Florida, WMA performance in terms of cracking, rutting, and pavement smoothness is comparable to that of HMA, say Bouzid Choubane, Sanghyun Chun, Hyung Suk Lee, Patrick Upshaw, James Greene and Abdenour Nazef, of the Florida DOT Materials Research Park in Gainesville, in their paper, Evaluation of Warm-Mix Asphalt (WMA) Performance in Florida.

They say with WMA, asphalt fumes and 26 aerosols have been reported to be reduced by 30 to 50 percent, while reductions reported for carbon dioxide (CO2) and sulfur dioxide (SO2) have been in the range of 30 to 40 percent. Reductions of 10 to 30 percent of carbon monoxide (CO) and 20 to 25 percent of dust also have been reported. Florida DOT started using the WMA technology in 2006 based on reported benefits due to lower asphalt mixing and compaction temperatures.

“Limited field and laboratory studies have indicated that WMA may have similar performance as traditional hot-mix asphalt,” they write. “However, some studies have also suggested that the use of WMA may increase long-term rutting and stripping potential, and hence the long-term performance evaluation of the WMA mixtures is still warranted.”

“The results to date indicate that WMA performance in terms of cracking, rutting and pavement smoothness is comparable to that of HMA,” the authors conclude. “These projects will continue to be monitored to further assess their long-term field performance.”

In addition to its other benefits, at least one warm-mix asphalt modifier can eliminate the expense of adding fibers to liquid binder used for open-graded frictions courses, say Bradley J. Putman and Kimberly R. Lyons, Glenn Department of Civil Engineering, Clemson University, South Carolina, in their paper, Evaluation of Warm Mix and Rubber Modified OGFC Test Sections Made Without Fibers in South Carolina.

Open-graded friction courses (OGFCs) enhance the tire-pavement interface while keeping surface water off the pavement, making them safer than conventional pavements. But because they lack fines, drain-down of liquid binder in early OGFCs quickly led to raveling of their surfaces, so much that they were banned by some departments of transportation (DOTs).

Since then, the advent of polymer modified asphalt binder has led to more durable OGFCs. While modifiers will help keep liquid asphalt binder from moving within an open-graded mix, it still may puddle at the bottom of a haul truck or settle lower in the lift of mix just placed.

This drain-down of asphalt seriously compromises the durability of OGFCs. The problem with the drain-down of liquid asphalt is solved by use of fibers – typically cellulose, but also mineral filler – which are used to hold the binder in place.

But research presented at TRB indicates a WMA modifier can halt drain-down in OGFCs as well. Pulman and Lyons’ paper summarizes the performance of OGFC mixtures used to construct two separate experimental pavement test sections in South Carolina, with the main objective to evaluate OGFC mixtures made without fibers.

“Material was sampled from the asphalt plant during production, and tests were conducted on the fresh mix, as well as specimens compacted at the plant and after reheating in the research lab,” the authors write. “The results showed that the removal of fibers from the OGFC mixtures in both projects did not have any detrimental effects on the mix performance (drain-down, permeability, abrasion resistance, indirect tensile strength and fatigue resistance).”

The WMA mixture was made with Evotherm modifier and exhibited increased fatigue resistance compared to the control mixture, even though the mix did not contain cellulose fibers, they say.

“Additionally, the WMA mixture showed the potential to reduce heat loss due to start-up of the paving operation (i.e., running asphalt mix through a cold material transfer vehicle and then a cold paver),” they say. “Limiting heat loss could improve the consistency of the OGFC mat density from the beginning transverse cold joint, thus potentially enhancing the pavement performance.”

Asphalt mixes containing up to 45-percent reclaimed asphalt pavement (RAP) are viable for the Commonwealth of Virginia, so long as care is taken in production and construction, say Stacey Diefenderfer, Ph.D., P.E., and Harikrishnan Nair, Ph.D., P.E., Virginia Center for Transportation Innovation and Research, Charlottesville, in their paper, Evaluation of High RAP Mixture Production, Construction and Properties.

In 2007, the Virginia Department of Transportation (VDOT) introduced specifications to allow RAP percentages of up to 30 percent in asphalt surface mixtures without a change in the virgin binder grade, the authors write, adding since 2007, increasing material costs and a growing awareness of the quantity of RAP available for use have sparked interest in asphalt mixtures having a higher percentage of RAP.

Recently, they say, VDOT began to consider allowing the use of surface mixtures with RAP contents of up to 45 percent, and in June 2013, a trial was constructed containing mixtures with 20, 30, 40 and 45 percent RAP for evaluation. The trial indicated higher RAP contents can be tolerated with no loss in performance.

“In general, mixtures containing up to 45-percent RAP can be successfully designed, produced and constructed if proper procedures are followed and attention to detail is paid during design, production and construction,” Diefenderfer and Nair say. “In addition, dynamic modulus and flow number test results indicated no significant difference in performance should be expected among the mixtures evaluated, despite slight differences in volumetric properties.”

They conclude the following:

The Kansas DOT has been evaluating performance of Superpave mix designs with higher percentages of RAP. Hamburg Wheel Tracking Device (HWTD) tests were done on Superpave mixes with high RAP content sampled from a number projects across the state. Each mixture was subjected to 20,000 repetitions or 20-mm rut depth, whichever came first.

Based on this study, the authors articulated these conclusions:

• The number of wheel passes and rut depth from Hamburg wheel tracking device tests are significantly different for the Superpave mixes with different RAP contents, though the trend of this variation is inconclusive.

• Recycled mixes with higher PG binder grade had higher number of wheel passes with lesser accumulation of rutting. However, the interaction study between aggregate type and PG binder grade is inconclusive.

• Rutting performance of Superpave mixes with RAP is significantly affected by the binder source, regardless of the performance grade of the binder. However, higher PG binder grade improves the rut resistance.

• Statistical analysis proved the total number of wheel pass, creep slope and stripping slope of the Superpave mixes with RAP in the HWTD tests are significantly affected by the RAP content, binder grade and asphalt sources at 90-percent confidence interval.

• The analysis of variance (ANOVA) on Superpave mixtures with RAP shows the number of wheel passes at stripping inflection point and stripping slope are significantly affected by mix type and binder source.

• ANOVA analysis also shows the rutting performance is highly influenced by the voids in mineral aggregate and RAP asphalt content. However, performance parameters are insensitive to the virgin asphalt content, voids filled with asphalt and dust-to-binder ratio of the mix.

• TSR values are significantly correlated (negatively) with the percent RAP in the mixture at 90-percent level of confidence or in other words, the mixtures become more susceptible to moisture damages the RAP content increases.

Dredging spoil usually is dumped at sea, but its fine nature makes it eligible for addition to portland cement concrete as a reclaimed material, say Nemmi Cole and Doreen Kobelo Ph.D., Florida A & M University, Tallahassee in their paper, Sustainable Use of Dredged Materials in Roadway Construction.

Dredging of waterways produces large volumes of dredged material, containing various contaminants – from heavy metals to pesticides – making its disposal increasingly problematic, they write. “Major ports are in need of an environmentally sound and economically feasible solution for this potentially hazardous material,” Cole and Kobelo say. “Dredged material is a valuable resource that can be used as filler, which is useful for the applications aside cement composites.

“Fillers are widely used in road construction and various other industries, due to its small average particle size and chemically active silt/clay fraction,” they note. “After proper treatment, dredged material has the potential to become a major contribution toward sustainable development and can reduce the quantities of primary resources needed for activities such as construction.”

Dredge material is seen as a valuable resource, and innovative methodologies for its beneficial use are in the infancy stage of development worldwide, Cole and Kobelo write.

Web Exclusive: Read “Dredged Material Mostly Clay, Sand,” which explains how the material can be used as filler, at betterroads.com/dredged-material.