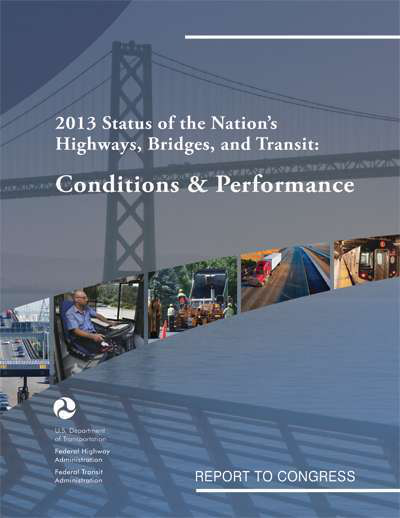 The U.S. Department of Transportation (DOT) on Friday released a report that finds all levels of government would need to spend an estimated $123.7 billion to $145.9 billion annually to maintain and improve roads and bridges.

The report — 2013 Status of the Nation’s Highways, Bridges, and Transit: Conditions & Performance, the DOT’s biennial report to Congress on highway, bridge and transit conditions — also notes that up to $24.5 billion is needed each year to improve transit rail and bus systems.

In 2010, federal, state and local government spent a combined total of $100.2 billion on highways and bridges and another $16.5 billion on transit systems, according to the report.

All levels received a boost from American Recovery and Reinvestment Act funds, including $11.9 billion for roads and bridges.

The report notes that the one-time funding from the Recovery Act helped improve pavement quality. Travel on pavements with good ride quality improved 4.2 percent between 2008 and 2010 — the highest two-year improvement since 1995, according to the report. However, those improvements have not been uniform across the entire transportation system.

According to the report, the U.S. state of good repair and preventive maintenance backlog for transit is $86 billion — an all-time high — and grows by about $2.5 billion annually. To spend down that backlog over the next two decades, all levels of government would need to spend an additional $8.2 billion each year. Additionally, many transit systems still use cars that are more than 30 years old, and more than 75 percent of repairs on those decades-old transit cars impacts other transit needs.

State and local governments often pay for more than half the cost of annual investments in transit systems across the U.S., the report notes.

The report also includes estimates for roads and bridges based on ranges, with higher ends based on forecasts provided by states, averaging an annual growth of 1.85 percent annually. The lower ends are based on a presumption that vehicle miles traveled (VMT) will grow about 1.36 percent each year — according to the report, that figure is consistent with average growth over the past 15 years.