Materials that Make a Difference

This once every-three-years trade show boasts innovative materials that deserve a closer look.

Innovative materials for road and bridge construction will be exhibited at ConExpo-Con/Agg 2014 in March in Las Vegas, and many of them are worth close examination for the exceptional engineering that distinguishes them.

An engineered pavement grid system has the ability to prolong pavement life while permitting higher loads with thinner asphalt lifts, according to the manufacturer Tensar International Corp. (booth No. 64927 in the Technology & Construction Solutions pavilion in South Hall 2). 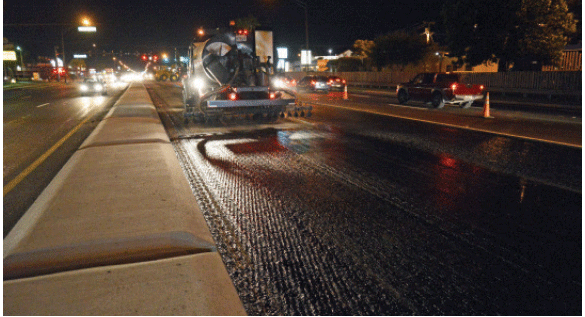 On mill-and-fill project on busy Florida A1A/528 on Merritt Island, Trackless Tack from Blacklidge Emulsions is placed in advance of overlay.

The GlasGrid pavement reinforcement system is composed of fiberglass strands coated with an elastomeric polymer and formed into a grid structure. Each strand has a high tensile strength and high modulus of elasticity; that’s important because asphalt concrete typically cracks at low strains.

Fatigue and reflective cracking in pavements generally are caused by traffic loading, age hardening or temperature cycling. When cracking is present, the traditional remedy has been to apply thicker asphalt overlays. For each inch of applied overlay, existing cracks are generally deterred from reflecting to the surface for a period of one year.

When the GlasGrid system is sandwiched between the leveling course and the surface course in an asphalt overlay, it strengthens the pavement, turning vertical crack stresses horizontally to dissipate them.

The GlasGrid system has a significant modulus advantage over asphalt at warm temperatures, but more importantly, it also installs at low temperatures without becoming too brittle to perform across all temperature ranges, the maker says.

According to the Asphalt Emulsion Manufacturers Association (AEMA), a tack coat – also known as bond coat – is a light application of asphalt emulsion between hot mix asphalt layers designed to create a strong adhesive bond without slippage. Without tack coat, the asphalt layers in a road way may separate, which reduces the structural integrity of the road and may also allow water to penetrate the structure, AEMA notes. 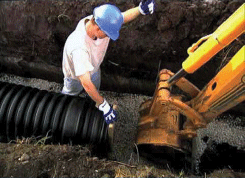 However, on overlay projects, a tack coat can be tracked by tires and shoe soles into parking lots, businesses, vehicles and homes. Contractors and owning government agencies receive complaints as people aren’t aware that there is fresh oil on the pavement, and they drive through a section getting black spots all over their white cars.

But now innovative producers of sophisticated, polymer-modified asphalt emulsions are making tack coats more friendly. While a tanker truck with spray assembly still is required, instead of staying “tacky” and subject to spreading, the temperature-sensitive products cure in seconds to a solid coat, then activate in the presence of heat and bond with the hot mix asphalt when placed.

One such manufacturer is Blacklidge Emulsions, Inc., whose Trackless Tack is a proprietary engineered asphalt emulsion tack formulated to cure extremely fast into a hard and drivable coating, often in less than 10 minutes.

A different engineered tack coat that has the potential to eliminate a spray paver on bonded thin overlays is UltraFuse bond coat from Blacklidge. It’s a hot-applied, polymer-modified tack coat that cools in seconds to form a non-tracking surface, and was specifically developed to provide user agencies and contractors with an option to the “spray paver” or Novachip system for bonded thin overlays. 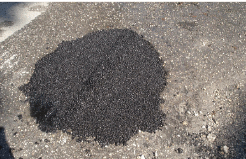 UltraFuse is applied with conventional distributors, as it fills cracks and seals the existing surface. Within seconds, the tack coat stabilizes and becomes non-tracking. But when paved over with a conventional paver after placement, heat from the fresh hot-mix asphalt or warm-mix asphalt (HMA or WMA) layer liquefies the polymer-modified tack coat to form a strong bond as is achieved with hot-applied spray paving. UltraFuse uses proprietary polymer modification for improved flexibility and bond strength.

Its application rate equals the residual asphalt associated with emulsion applications, typically 0.08 to 0.18 gal/yd2 in open-graded friction courses (OGFCs) and 0.04 to 0.08 gal/yd2 in dense-graded mixes.

The assault of high-density polypropylene (HDPE) against reinforced concrete pipe (RCP) and corrugated metal pipe (CMP) has been ongoing for decades, and road and highway drains have been ground zero for this battle. 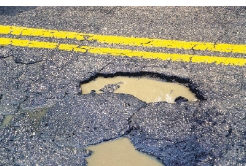 English chemists Reginald Gibson and Eric Fawcett created a solid form of polyethylene in 1935. This discovery was first used commercially was an insulating material for radar cables during World War II. In 1953, Karl Ziegler of the Kaiser Wilhelm institute invented high-density polyethylene, and two years later HDPE was first used as a pipe. For his invention of HDPE, Ziegler won the Nobel Prize for Chemistry in 1963.

Pipe behavior can be broadly classified as flexible or rigid, depending on how it performs when installed. Flexible pipe – like HDPE – has to move, or deflect, to transfer the overburden load to the surrounding fill, according to ConExpo-Con/Agg 2014 exhibitor, Advanced Drainage Systems, Inc. (ADS), at booth No. 65716 in the Technology & Construction Solutions section of South Hall 2.

HDPE combines mechanical and chemical properties for drainage pipe applications, while competing geocomposite cores are made from less desirable materials, such as low density polyethylene or styrene, ADS says.

“Rigid pipe transmits most of the load through the pipe wall into the bedding. In both cases, proper backfill is very important in allowing this load transfer to occur,” ADS says. “The number one characteristic that sets HDPE apart from other pipe types is that it can be made to be flexible. This quality opens HDPE pipe up to a different world of applications than rigid pipe.”

Initially, lightweight HDPE pipe is less expensive than RCP and can be handled with less fuss, but the concrete pipe industry says it’s more dependent on careful installation of bedding, while strong, rigid concrete pipe is more forgiving.

Viscoelasticity is the property of materials that exhibit both viscous and elastic characteristics when undergoing deformation. Viscous materials resist shear flow and strain linearly with time when a stress is applied. Elastic materials strain when stretched and quickly return to their original state once the stress is removed. Viscoelastic materials have elements of both of these properties and, as such, exhibit time-dependent strain.

Tests show that polyethylene and polypropylene do not weaken throughout time, ADS says, adding that the same stress/strain curve for the material can be duplicated repeatedly. What remains unaccounted for in the test is stress relaxation, which is a property unique to viscoelastics.

A popular engineered HDPE product is N-12 pipe from ADS, with performance advantages over traditional pipe at a fraction of the cost, the maker says. N-12 offers abrasion resistance and won’t rust or corrode. It’s used for cross drains, side drains, storm sewers, culverts, landfills and other installations across the country and is available in sizes from 4- to 60-inch diameters.

The pipe’s design can withstand H20 and E80 loads, making it suitable for culvert installations. As N-12 pipe is lightweight, it requires fewer people, less time, and less heavy equipment to install, ADS says. Due to the longer lay lengths, ease of handling, and push–together joints of ADS pipe, the installed cost savings of HDPE ranges from 10 to 30 percent when compared to reinforced concrete pipe, the firm says.

In the meantime, a nationwide survey released in 2012 by the American Concrete Pipe Association found that concrete pipe rated highest on several of the criteria used to make decisions on such purchases.

A different-function engineered product is ADS AdvanEDGE oblong corrugated edge drain pipe for use in subsurface drainage applications, offered in 12- and 18-inch heights. It has internal bracing adjoining each long wall to prevent crushing under typical loading.

AdvanEDGE pipe does not rely on the geotextile for structural support, although it’s available with or without the geotextile wrap. Instead, its strength is derived from a corrugated cylinder maintained by pillars located strategically throughout the core. The result is a series of oval-shaped sections with all-direction strength. This completely enclosed waterway with fewer projections allows it to function as a pipe, discharging more water to the outlet.

Road patch under any conditions

Typically road agencies patch winter potholes with the “throw, roll and go” method; that is, workers shovel asphalt into a pothole, truck tires are backed over the mix to compact it, and then the truck and crew move on to the next pothole. The patch seldom outlasts the winter.

This results in repetitive labor as the pothole is given a more permanent patch when warm weather comes. But the ability to permanently patch potholes in winter – under wretched conditions with standing water in the pothole – will eliminate that second trip and win kudos from weary motorists.

That’s the philosophy behind the new generation of value-added, high-performance pothole patching compounds. One of them EZ Street Co., will be showing its product in booth No. 90301 in the Platinum Hall on the Platinum Lot.

EZ Street is a polymer-modified, hydrophobic cold asphalt which can be used in potholes with standing water and requires no mixing or tack coat.

The product is a black, coated stone with petroleum odor. Because it’s hydrophobic it can be used in the presence of water. The most important ingredients are proprietary polymer modifiers. To make EZ Street, selected and graded raw materials (coarse and fine aggregate) are combined with the liquid portion of the mix, made up of asphalt cement, diluents and the polymers.

It’s available in two varieties, the conventional polymer-modified cold mix, and a “green” Bio-Blend “hybrid” mix, which uses in addition to liquid asphalt, renewable resources such as canola and soy crops, or other industrial byproducts, which substitute for classic petroleum derivatives in the mix. It also may include reclaimed asphalt pavement (RAP) in varying amounts.

UPM Cold Mix describes bituminous patching mixes that are designed in various seasonal grades for use when the outside ambient temperature is in the range of -15 to 100 degrees Fahrenheit, each grade manufactured to accommodate anticipated climatic conditions. UPM calls its grades Winter Mix, Spring/Fall Mix and Summer Mix.

UPM’s designs work as a patch during cold, damp. wet or hot weather for both bituminous and concrete pavement. UPM’s proprietary cold-asphalt additives and quality control provide a pavement repair that will outlast the surrounding pavement matrix more than 90 percent of the time, UPM.

Read “Tough Fibers for Concrete,” which focuses on a new generation of polypropylene/polyethylene synthetic fibers, at betterroads.com/fibers-for-concrete.