Texas continues to be a hotbed for equipment manufacturer relocations.

Chinese mobile elevated work platform manufacturer LGMG announced that it is relocating its North American headquarters to Dallas from Chambersburg, Pennsylvania later this year. The company cited “a disappointing ruling from the U.S. Department of Commerce and International Trade Commission's MEWP industry investigation, which resulted in significant tariffs imposed on Chinese manufacturers” as the reason for the move.

The news comes on the heels of an announcement that Caterpillar would move its corporate headquarters from Chicago to Irving, Texas.

As a result of the higher tariffs, LGMG is expanding operations in Canada, consolidating warehouse operations and relocating its parts and service support operations to the new corporate headquarters.

Additionally, LGMG has recently opened two new Canadian warehouse operations, one in Vancouver, British Columbia and the other in near Montreal, Quebec. Both operations provide direct access to the largest markets in Canada and position the company to effectively support its Canadian customers, the company says.

“We have aligned ourselves with a great partner in Eastern Canada, Cisolift, who has a wealth of experience in the access equipment industry, and strong relationships throughout the region,” adds Liner. “And we are excited for the opportunity to build a similar distribution network in the West with our new Vancouver Warehouse.”

Liner was named CEO earlier this year, following the retirements of former CEO Craig Paylor and Senior Vice President Rusty Kaylor. The company hit a stumbling block early in its U.S. entry in 2019, getting sued by JLG, a former employer of Paylor and Kaylor, for trademark infringement.

Despite that, the company says it is “poised to have another robust growth year.”

The Commerce Department determined in February that the U.S. MEWP industry is threatened by “less than fair value” Chinese imports that the Department of Commerce determined are subsidized by the Chinese government, according to a Trade Commission investigation report.

The anti-dumping complaint was brought by the Coalition of American Manufacturers of Mobile Access Equipment, which includes U.S. manufacturers Terex (Genie) and JLG. The ruling also affects such Chinese manufacturers as Sinoboom, Zoomlion and Dingli that import MEWPs to the U.S.

The ruling led to increased U.S. tariffs on the Chinese products, which include scissor lifts and articulating and telescopic boom lifts. 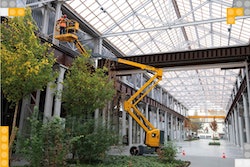 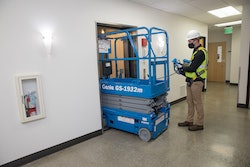 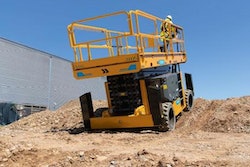