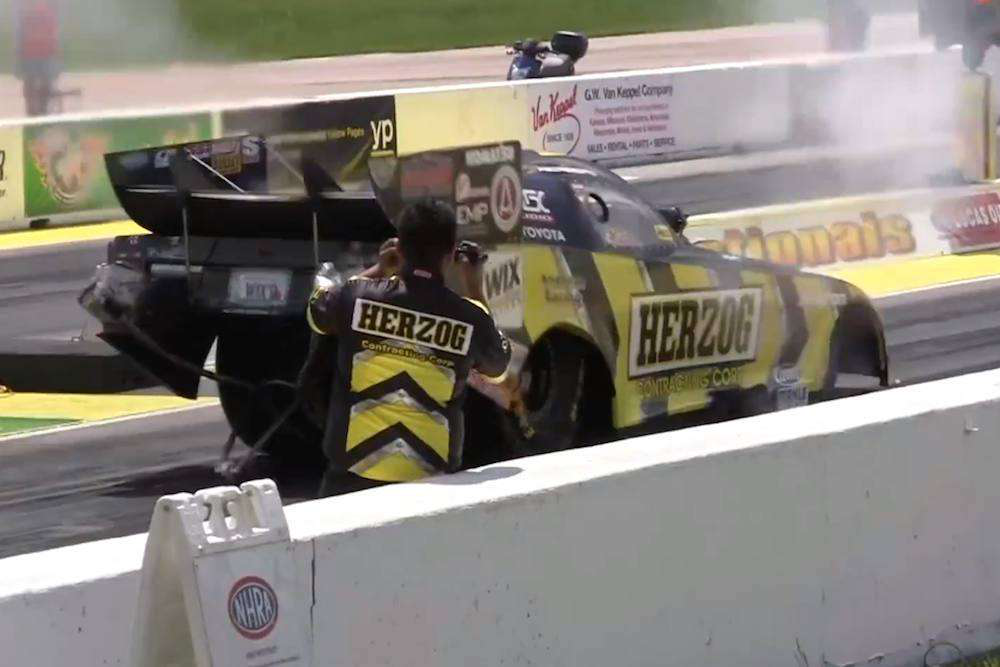 Mechanics and technicians, as we all know, are in short supply. To recruit them Herzog Contracting, the Association of Equipment Management Professionals and the Associated General Contractors of America are to go where the mechanics go—specifically National Hot Rod Association drag races.

For the last seven years Herzog has partnered with two-time NHRA Funny Car champion Tony Pedregon, sponsoring a car as a major associate sponsor, and for two of the season’s races, as a primary sponsor in which they run the yellow and black Herzog graphics. This year Herzog also invited Komatsu America, the AEMP, AGC and other industry partners to join them in the endeavor. You can see the results in the video below.

“It makes a lot of sense for the association to get involved in motorsports, considering how popular racing is among many of the employees of our member firms,” said Al Landes, the president and CEO of Herzog Contracting, and the president of the Associated General Contractors of America.  “As people who build magnificent things for a living, we have a special appreciation for the incredible skill and persistence required by these teams to make these amazing machines perform at such a high level.”

The cost of entry or admission is much lower than NASCAR or open wheel racing. And the family friendly atmosphere makes for a great weekend.  Plus there are plenty of local drag strips across the country where up and coming amateurs can test their mettle.

“The spectators can walk right up and stand at the back of our pit,” says Lukovich. “They can see the driver, the crew chief, all the components of the motor, and the process of assembly and disassembly. In terms of entertainment, this offers way more value.”

AEMP is looking at drag racing as a venue for it’s members to find and develop new talent in the technician field. Not surprisingly, the association’s 2014 Chairman, Thad Pirtle, got his start turning wrenches on dragsters. “It’s a challenging sport. It will test your abilities,” he says.

Pirtle is also vice president and equipment manager for the construction company Traylor Bros., and finds many parallels between drag racing and construction. “There is a lot of teamwork, quality and reliability in both,” he says. “Every move has to count. Every move has to be correct. It’s no different from what we do on a construction project. It all comes together in a very condensed version on a race car.”

For a close up look at the sights and sounds of Tony Pedregon’s Labor Day run at the NHRA Kansas Nationals—and to see how some of the country’s top construction companies and OEMs are using these events for recruiting, team building and business development—don’t miss the video above.