2020 is starting out as a particularly deadly year for trench collapses, with seven deaths since January 1, including a worker who died while rescuing a coworker.

That marks the deadliest first two months in recent years. In comparison, there were three deaths in the first two months of 2017, and two each in 2018 and 2019, according to records by the U.S. Occupational Health and Safety Administration. (OSHA online data on worker fatalities only go back to January 1, 2017.)

The deaths have occurred in separate cave-ins this year in North Carolina, New York, Ohio, Texas, Washington and New Jersey.

He died helping to save another

Jonathan F. Stringer, 24, died January 9 when a trench collapsed at the Skookumchuck Wind Energy Project near Rainier, Washington. The trench was being dug near a logging road at the site where wind turbines will be added.

Another worker in the trench who was partially buried was rescued and treated for injuries at a Seattle hospital. Stringer was completely buried.

Stringer’s father wrote on a GoFundMe page for the Jonathan Stringer Family Fund:

“He was on a job site, helping save a man from a collapsing trench. He succeeded. It was Jon’s nature – helping others.”

He leaves behind a daughter and a fiancée.

OSHA is inspecting RES America Construction Inc. and RES System 3 LLC, both of Broomfield, Colorado, in relation to the incident, according to online records.

Two workers died January 28 when a wall collapsed on a 30-foot-deep excavation for a septic tank in Long Island.

Max Antonio Turcios Chavez, 46, and Deniz Dos Santos Almeida, 57, were working at the site when a trench wall collapsed on them, burying them in 5 to 7 feet of mud and sand, according to news reports.

Chavez was uncovered by rescue workers the day of the collapse, but because of darkness and the conditions of the trench, rescue workers had to postpone the search for Almeida until the next day, when his body was recovered.

RC Structures of Roslyn, New York, is being inspected by OSHA in relation to the incident, according to online records.

Almeida’s obituary said he was a foreman for RC Structures for many years. He leaves behind a wife, son and daughter-in-law.

Chavez’s funeral was held in Honduras, according to his obituary.

Rigoberto Ochoa Gonzalez, 32, of Houston, was working in a trench February 12 in Rosenberg when it collapsed.

He was in the trench with another worker, who escaped. Another worker was operating a backhoe at the time of the collapse, according to news reports.

OSHA is inspecting Master Construction New Generation of Rosenberg in relation to the incident, according to online records.

Three other workers were in the 6-foot-deep trench with him. One got out on his own, but two others had to be rescued by emergency personnel.

J Squared Plumbing of Decatur, Georgia, is being inspected in relation to this incident by OSHA, according to online records.

Worker dies in trench in Ohio; third since 2019

Drew Oswald, 34, of Baltic, Ohio, died February 17 when a trench collapsed on him in Licking County, Ohio.

Coworkers had partially uncovered Oswald by the time rescue personnel arrived, but he was dead on their arrival, according to news reports. He leaves behind a wife, parents, grandparents and other relatives, according to his obituary. He was known for his “contagious laugh” and enjoyed riding motorcycles.

Just 11 days before Oswald’s death, the Ohio Bureau of Workers’ Compensation (BWC) introduced a $2 million safety grant program for employers in the state to provide trench safety equipment for workers.

The grant was established in response to two trench-collapse deaths in 2019 in Ohio.

The grants provide 4-to-1 matching funds, up to $12,000, to private and public employers covered by the State Insurance Fund. The money can be used for such equipment as trench boxes and hydraulic shoring.

“This type of work poses some of the most severe and deadly hazards in the construction industry,” said BWC Administrator and CEO Stephanie McCloud. “But we know the injuries and fatalities associated with trenching are preventable with proper training and equipment, and that’s why we’re launching this grant program.”

Worker buried up to chest

On February 27, a 35-year-old worker in a trench on a water line replacement project for a sprinkler system in Jersey City, New Jersey, died when the trench collapsed.

News reports said Jared Petruska of Wayne was buried up to his chest and trapped for five hours.

For more on the business and human costs of trench-collapse fatalities, see Equipment World’s special report “Death by Trench“.

Contractors fined $265K for trench collapses, including fatal cave-ins in Ala., Miss. 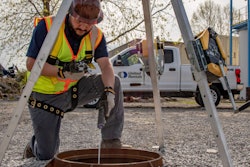 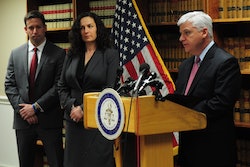