A construction worker was killed last week after suffering a high fall on a Wisconsin jobsite.

According to a report from WKOW TV, 25-year-old Christopher Lord fell from a height of about 60 feet on the morning of August 17. The Wisconsin State Journal reports Lord was working as a framer at the site where an apartment complex is being built.

After the fall, Lord was taken to the hospital but died there from his injuries. The cause of his fall remains under investigation by the Occupational Safety and Health Administration.

Lord had worked for the project’s general contractor, McGann Construction, for three years as a carpenter, the Journal reports. Bryan McGann, the company’s president, told WKOW the fall was the company’s first employee fatality in the last 28 years.

“We’re doing our homework now, trying to find out what exactly happened,” he told the State Journal. “We can talk more when we know more about it. Right now, it’s very sad for everyone involved in our company. We’re a pretty close-knit crew.” 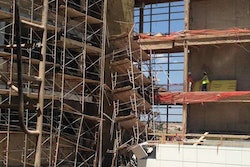