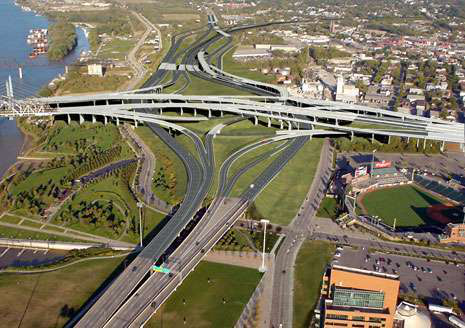 The Ohio River Bridges Project today received federal approval to proceed to construction with a cost-savings plan recommended by the governors of Kentucky and Indiana and Louisville’s mayor.

The Federal Highway Administration (FHWA) issued the revised Record of Decision,approving the plan outlined nearly 18 months ago to build two new bridges across the Ohio River and modernize the regional interchange in downtown Louisville.

The approach, known formally as the Modified Selected Alternative, will save more than $1.5 billion and cut construction time in half over the original plan approved in a 2003 Record of Decision. The savings largely come from rebuilding the downtown interchange in its current location, simplifying the interstate connections to the downtown I-65 bridge and reducing the East End Crossing from six to four lanes while providing options for future expansion.

“After decades of discussion and debate, the Ohio River Bridges Project is about to become a reality,” Gov. Beshear said. “Through determination and partnership, Kentucky and Indiana have overcome the challenges and cleared the path for a safer, better transportation system for the two-state region.”

Gov. Daniels called the decision “another important step for the two states on this long awaited project.”

“We’re eager to break ground and move ahead with construction, but more importantly, this is about convenience, safety, jobs and unlocking greater economic potential in southeastern Indiana,” he said in a written statement.

Mayor Fischer added in a press release: “It’s now time to build these bridges, and today’s decision clears the way for construction to begin. Our new approach not only saves $1.5 billion, it cuts the construction time considerably.”

The revised Record of Decision, which was signed by FHWA Kentucky Division Administrator Jose Sepulveda, called the Modified Selected Alternative “the only financially feasible alternative that will meet the purpose and need for the action.”

“The Modified Selected Alternative incorporates extensive measures to avoid, minimize, and mitigate impacts to the natural and human environment,” the report said.

The FHWA reaffirmed the original “purpose and need” of the project from the 2003 Record of Decision, which includes:

The Supplemental Final Environmental Impact Statement (SFEIS) and a new Record of Decision were required because of the proposed cost-saving changes and the decision to use toll revenues from the new and improved facilities to help pay for the estimated $2.6 billion project.

The SEIS process included extensive public involvement, re-examination of environmental impacts and in-depth analysis of changes in the project area since the 2003 decision. The revised ROD and the SFEIS are available for viewing on the project’s website, www.kyinbridges.com.

The federal approval helps ensure the procurement processes for both the Downtown and East End crossings remain on schedule, according to officials with the Kentucky Transportation Cabinet and the Indiana Department of Transportation.

Both states plan to award contracts for their respective crossings before year’s end, and an August groundbreaking is expected for the first element of the massive project – a $5.5 million road extension that will ultimately connect the River Ridge Commerce Center to State Road 265 and the future East End Bridge.

Construction on the main crossings will begin in earnest in early 2013.