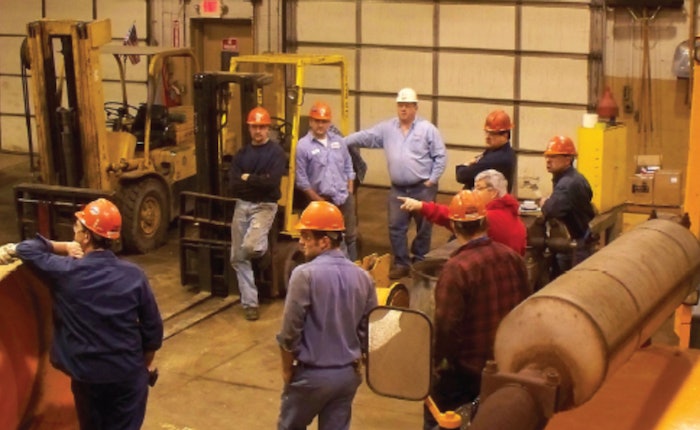 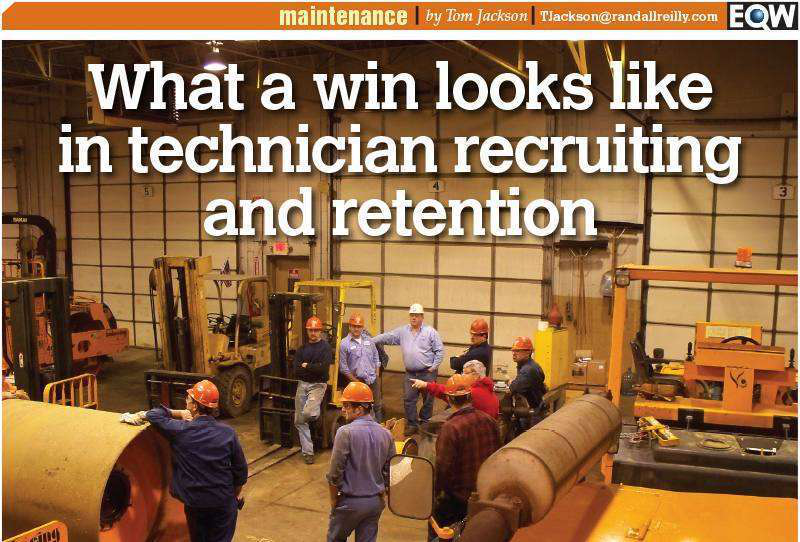 The biggest challenge facing the heavy equipment industry is the lack of qualified workers in any skill area. The problem is not impossible to solve but as with football or any other sport, winning requires preparation, planning, goal setting, training and mentoring. This is more work than many contractors and fleet managers anticipate and certainly more than what brought results in the past.

Carl Uhinck, CEM, asphalt equipment manager for Kokosing Construction, recently gave a presentation to the Association of Equipment Management Professionals on his company’s “circle of retention” as they call it. This company-wide process is taught and practiced by all managers and results in better quality new hires, better engagement with them and ultimately better retention.

The circle of retention graphically represents a continuous loop of activity. The process never stops moving from recruiting to training to engagement to development, and the ultimate goal, the career of well-trained, highly-motivated employee who works at the peak of their ability in the company’s systems. Here’s how it works:

Starts with the kids

Recruiting starts early with managers reaching out to local schools, offering field trips and construction days. “The early phase is getting kids to understand there are opportunities in a field outside of wearing a suit and tie every day,” says Uhinck. “We take them to the shop and let them run a backhoe. Get them a hard hat and open their eyes to it. We bring in the Boy Scout troops. You touch a lot of people that way as they’re making decisions in junior high and high school.”

As the kids and potential recruits get older, the conversation continues and Kokosing begins and help the kids focus in more detail on what specific paths they may want to pursue.

The company also maintains clear channels of communication with the local trade schools. “We get to know those people. We talk to them a few times a year, talk about what we’re looking for and what they need.” Uhinck says. The groundwork pays off, not only in more potential recruits, but perhaps even more important, a better quality recruit.

“The more effort you put into recruiting the more it’s reflected in your retention,” says Uhinck. “If you recruit with only one shoe on, that’s the kind of results you’re going to get. When you recruit hard, communicate with the schools, you’re actually seeking conversations with young men and women about the industry and helping them decide if this is right for them or not. So you’re not wasting time.”

The process only gets more personal and more involved when recruits become employees. This phase of the process they call engagement.

“I get tired of people always saying, ‘we’re looking for technicians.’” says Uhinck. “We’re not just looking for technicians. We’re looking for fine young men and women who want to do this job. To engage people like that you talk to people. They’re not just numbers. Help them understand what you’re dealing with. Get them involved in the process from the get go. Have them help you decide what the route is, and what’s the best opportunity for them.”

That’s engagement and it also is a continuous process.

“It’s more than a giving them a checklist and a gas card,” Uhinck says. Rather, you show them the career path. You talk about what interests them. You share what the company needs and you come up with a mutually beneficial path.

“It has to be a frequent dialog, because it could change on a dime,” Uhinck says. “Sometimes your best recruit as a field mechanic turns into your best grade control specialist or welder. We don’t ever want to limit them to what their potential is at 21 years old.”

The tempo of engagement also needs to vary depending on the individual. Every company would like to think they want overachievers but not all companies are prepared to engage these go-getters to take full advantage of their energy.

“As a manager it pushes you to put the opportunities in front of that over achiever to fully engage them all the time,” Uhinck says. “If you slack off and don’t engage that person and don’t look for opportunities for them, they’re going to get bored. And they’re not going to feel satisfied. Pay is pretty standard across the board. All the other things decide if that person will be satisfied with the job.”

Managers should also recognize that there are two types of engagement, self initiated and forced. Self-initiated engagement is nothing more than regular conversations that emerge spontaneously when talking to employees. But managers sometimes have to work to get shy or reluctant employees to open up and tell them what they’re thinking. That’s forced engagement.

An open-door policy also helps. “We’re a shirt-sleeve management company,” says Uhinck. “We want to be available all the time. But it’s more than just a sign on the door. You have to be willing and ready to engage anybody anytime and that’s really the essence of the open door policy. A personal connection with each person.”

Forty hours a year of training is the goal Kokosing has set for people in technical fields.

“Many times we exceed that based on what our needs are,” says Uhinck. “Its easy to fill up those 40 hours with all the opportunities available.”

The delegation for training is pushed down to the different departments and those departments come up with specific and individualized programs that match company needs with employee talents and aspirations. Training programs are individualized first and then compared to find similar needs and synergies for collective training, Uhinck says.

Kokosing does yearly evaluations as well, but informal discussions of an employee’s progress are also part of the process and keep the engagement process moving. Sometimes sitting down at a specific date and time yields a different caliber of information than informal discussions, Uhinck says, so both are useful.

No right way to do the wrong thing?

One of the company’s core values, that’s neatly encapsulated in a quote is that there is “no right way to do the wrong thing,” say’s Uhinck.

“We’re going to do the right thing and we want that ingrained from the start with everyone. There is only right and right. And top on that list for anybody in this industry is safety. From there on down you have to do it the right way.”

All these processes have to be executed and reinforced with good leadership from managers.

“Leaders have to match the company’s core values,” Uhinck says. “If you’re lacking in leadership, you’re going to lack in recruitment and retention.” Too often technicians move on to a different job because their managers didn’t communicate well, didn’t engage, didn’t listen, or train.” Leaders have to make those things happen.

Another aspect to leadership is recognition. Uhinck says it’s easy to criticize but hard for some people in construction to give praise. Managers who recognize this and remind themselves to be generous and sincere with the praise will reap rewards. You don’t have to overdue it. “A little bit of praise goes a long way,” he says.

The value of mentoring

If this sounds like a lot of work, it is. But there is the practical payoff that comes from staffing your departments with committed employees and reducing the churn in low level employees.

But Uhinck says sometimes the biggest payoff for the manager is the opportunity to be a mentor. “Finding those people and encouraging them to step up to is rewarding for the company, the person you’re bringing up through the ranks and the person who is doing the mentoring,” he says. It’s another way to challenge and engage your senior people because it gives them an opportunity to leave a legacy for the company.”