Don McLoud
Dec 7, 2022
This 1954 International TD-6 dozer was bought by the founder of W.F. Delauter & Son in 1955 and is still with the general contractor company today. To the right is the company's original sign – and phone number.
Kirby Delauter

Willie Delauter and his son, Russ, struck out on their own in 1955.

To start the new W.F. Delauter & Son grading, backfilling and pond business, they would need a dozer.

They found a used 1954 International TD-6 that suited their needs and budget. The machine helped launch the company and remained in use until the mid-1980s.

In 1992, it got a second life as a Christmas present. And today it remains a monument for the company’s headquarters in Emmitsburg, Maryland.

A dozer and a deal

Father and son had a deal back in 1955 when it came to running the business – and the TD-6.

“The deal,” according to Kirby Delauter, the company’s third-generation owner, “was my grandfather said, ‘Look, you get the work. I'll do the work.’

“My grandfather didn't want to deal with people. He just wanted to run equipment. That’s it.”

Willie Delauter was the only operator of the TD-6 until his death in 1967.

“They dug ponds, dug foundations with it, backfilled foundations,” says Kirby Delauter. “That's pretty much what they started out doing – farm lanes, ponds.”

Today the company has a glass-encased display with a company invoice from 1957:

One hour of pond work with the dozer brought in a whopping $6.50.

Willie Delauter and the dozer were constant companions. “That’s what he was most at home with,” Kirby Delauter says of the old machine.

Kirby doesn’t remember his grandfather. He was only 3 years old when he passed away. But he remembers the stories his dad would tell him.

“People would wait three, four weeks for him to do their work instead of getting somebody else,” Kirby recalls his father telling him. “He was apparently really good at what he did.”

A dozer's rise and fall

A few years after start-up, the company added a cable excavator, backhoe and dump truck. Russ Delauter also operated them while making contacts for new jobs. But the TD-6 was always present.

The early 1950s International TD-6 models weighed between 7,280 and 7,800 pounds and ran on an International 4-cylinder diesel engine. They were made in Melrose Park, Illinois. The TD-6 debuted in 1940 and remained in production in various forms until 1969, according to Diesel World. International Harvester’s construction division was sold to Dresser Industries in 1982.

Around the time International Harvester was selling off its divisions, Kirby Delauter graduated high school and went into the Army. After he got out in 1984, he decided to enter the family business.

The TD-6 was still running and had been used by one other operator for the company since 1967, but it was ready for retirement in 1985.

“It was just kind of sitting around and just really not being used,” Kirby recalls.

Around 1992, Kirby decided to have it refurbished as a Christmas present for his dad. The restoration company sandblasted off the yellow paint someone had applied years ago and returned its original red. Decals were added along with a tribute to its first owner, with the W.F. Delauter & Son name painted on it.

Ever since, the dozer has resided in front of the company’s offices, which today are in Emmitsburg, Maryland. Visitors often check out the dozer, a reminder of a bygone era in construction. And with Kirby’s son William rising the ranks of the family-owned business, the dozer’s significance continues to grow.

“It's not going anywhere,” Kirby says. “It's important to have that. We’ve got a whole other generation coming through here now.” 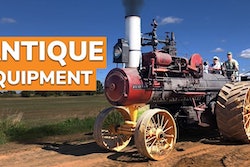 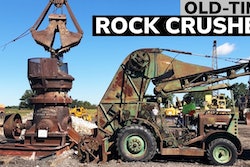