The first thing you notice about Tim Davis’ early 1980s Terex D700A dozer is lime green – all over.

The other surprise is the engine’s sound.

“One of the drawbacks – or some people considered it a drawback – was they have the old Detroit Diesel series 71 engine, which was a very reliable engine, but they were extremely loud,” Davis says. “And so operators didn't like the noise.” (To see – and hear – his dozer in action, check out the video at the end of this story.)

He believes that’s part of the reason the dozer didn’t sell as well as other brands at the time.  But for Davis, who has spent five years restoring his Terex from top to bottom, the noise of the 205-horsepower 6V-71T engine is part of its charm.

Then he adds, “They are loud.”

It’s also a welcome sound after wanting for decades to find one of the forgotten dozer models that have mostly ended up as scrap, and being able to bring it back to mint condition.

“It was really in worse condition than I thought it was when I got it,” he says. “Once I started getting into it, I would find more and more things that were wrong with it.”

“But,” he adds, “there's not many of them around, not many people have one. So I'm pretty proud of it at this point, but it's been a lot of hard work.”

Davis’ first memory of the green dozers was in the late 1970s when his father owned a grading company near Charlotte, North Carolina.

“I was 4 or 5 years old, and I remember going out and sitting in the back of a truck on the job and seeing them running,” he says. “I guess I just got it in my blood. I've always liked them ever since then.”

Then, the dozers were under the General Motors umbrella, which established its Terex Division in 1970. His dad’s Terex dozer was a 1978 B2-20B.

In 1981, GM sold the Terex line to IBH, a German company, which changed the nomenclature on the B2-20B dozers to D700A. IBH went bankrupt two years later, and GM resumed ownership of Terex. Davis’ model has a later serial number under IBH, leading him to believe his is a 1982 or 1983 model.

As Davis got older, he operated some Terex equipment. After school, he went to work for larger grading companies and is currently working for grading and excavating contractor Hoopaugh in the Charlotte area.

He says the Terex dozers were ahead of their time, especially in operator comfort and ergonomics. “Terex was one of the first ones to put the steering over on the lefthand console where basically all dozers are at today. The operator's compartment was set up to be extremely operator friendly.”

He says it was comparable to the Cat D7G dozer of the same period. “In my opinion, it has a lot more power. It’s a little more nimble. It moves around a little quicker, but it’s very similar in size.”

He notes that Terex also put the radiator on the back. “They had a lot of innovative-type features for that timeframe you didn't see until later on with other manufacturers,” he says.

Though loud, he praises the Detroit engine. “The Detroit really is responsive, and it accelerates faster than a lot of the competitive machines would have.”

“It’s very smooth to operate,” he adds. “The gear shifts,  from a lower speed to a higher speed and higher to lower, were very smooth.”

The operator had good visibility to both sides of the blade. The dozers also had higher ground clearance compared to other similar dozers at the time. “To me, they seem to perform better in wet conditions and soft soils.”

When his dad’s company fell on hard times, he had to sell the Terex dozers and scrapers. But in 1994, as he was getting back on his feet, he got a chance to buy the D700A his son owns today.

The owner of the now-defunct L.B. Smith Co. equipment dealership based in Pennsylvania decided to sell one he personally owned, and it was shipped to the dealer’s branch in Charlotte. Davis’ father considered buying it.

“I remember I was about 18 years old or so, and he and I went up there and looked at the machine and talked to the salesman about possibly purchasing it,” Davis says. “At that time the machine was in excellent condition. It had very low hours on it and was very clean.”

But his dad decided against the purchase, and it ended up with a grading company in nearby Lancaster, South Carolina.

From time to time over the years, Davis would see the green dozer at various jobsites. As he got older, he began looking for his own by searching online and at auctions. But they were hard to find. And when he did see one, either the owner wanted too much, or they were too far away.

“Those things are very few and far between,” he says. “There wasn't a tremendous amount of them made, and then back during the recession of ’08, a lot of those machines got scrapped.”

At some point, the grading company sold the Terex dozer to a local farmer.

“So by chance, I ran across a guy that knew the farmer that had the dozer, and this fellow knew I had some interest in it,” Davis recalls. “So he took me to talk to the farmer that owned the machine.”

The dozer Davis saw was in much worse shape than it had been in 1994. It had been used to clear land and pull out stumps. “They had really abused the machine and just hadn’t maintained it really well,” he says.

But he didn’t know until later just how bad its condition really was.

Over the next five years, he would spend his spare time working on the dozer.

It would still run, but not well. It had lots of problems.

The paint was scratched and scarred. The undercarriage was worn out. There were a lot of broken bolts that had to be tapped out, rethreaded and replaced.

He rebuilt the engine and the hydraulic cylinders and replaced the radiator and all the hoses.

“I pretty much went through everything on it except for the transmission and the final drives,” he says.

Some of the parts were extremely hard to find, or nonexistent.

“I had to search high and low for some of the parts I needed.”

He lucked upon a man in Cleveland who had at one time run a fleet of Terex equipment. Davis drove from Charlotte to Ohio to load up his pickup truck with parts.

But in some cases, he would hit dead ends after rummaging through salvage yards. For the undercarriage, he had to go to a machine shop to make the components.

“I'd searched everywhere and couldn't find the replacement parts that I needed.”

At times, he wondered if it was worth it. When yet another problem would crop up, he’d have to dig into the research and hunt for a solution. It was also expensive.

“I was like, ‘Man, I'm never going to get this thing done,’” he recalls. “It was a struggle at times to keep moving with it.”

Now after five years, the work is done, except for some minor issues he plans to correct. The transformation has been amazing.

His father has also been pleased and helped with the restoration, along with Davis’ brother.

“They both enjoy seeing it and seeing it finished up,” he says.

His dad has even operated it since it’s been restored.

“He's really pleased with the way it turned out,” Davis says. “It made him proud to see it go from what it was, to getting it back in basically almost like-new condition.”

Davis is also rightly proud of the results.

“I kept pushing through it,” he says. “I'm extremely proud of the machine and like for people to see it and talk about it.”

Check out the video below of Davis operating his restored Terex D700A and it's distinct engine sound, as well as more photos of the final product: 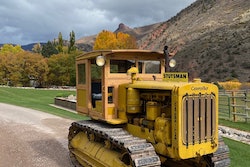 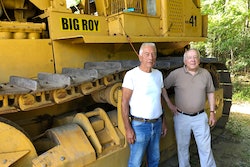